Isaac Julien's 2004 piece True North will be on display through Jan. 29 of next year. 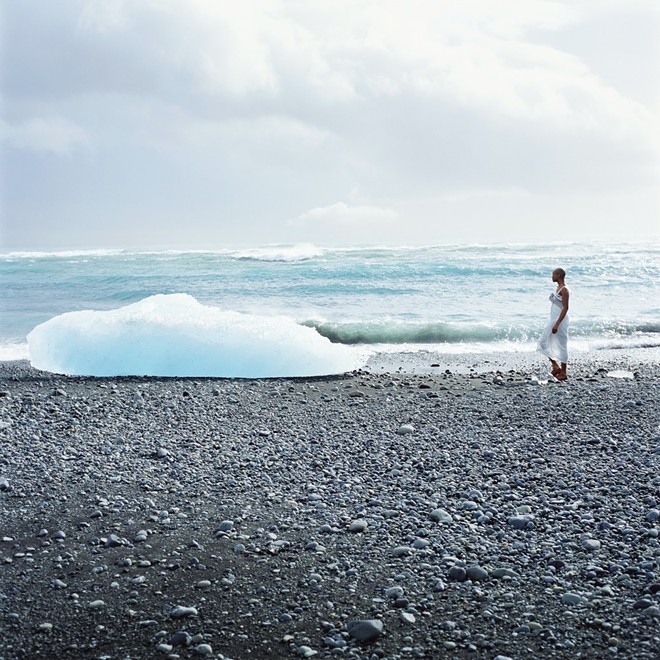 Walking into the air-conditioned screening room inside Southtown's Ruby City contemporary art center can be a welcome respite from a scalding Texas morning. The chill air inside the venue isn't the only thing that's likely to drop visitors' body heat.

Playing on an endless loop on a triptych screen inside the theater is Black British filmmaker and installation artist Isaac Julien's 2004 piece True North, which will be on display through Jan. 29 of next year. Pulled into the onscreen imagery, it's easy to lose sense of the heat outside as a distant figure in black walks across a vast, icy landscape that extends across the room.

The film's experimental, sometimes machine-like score accentuates the crisp images that play across the screens: closeups of snow-covered faces staring back with somber expressions; a shapeless mass of ice sitting on an arctic shore; a frozen, glasslike chapel where one might go to pray for the warmth of the sun.

"In [my] multiple-screen work, you have the images juxtaposed to one another," Julien told Ruby City during an interview last year about his film installations. "That creates a more poetic rendition with the story and allows the viewer to enter into a different form of receiving the images and identifying with them."

True North is the first in Julien's trilogy of short film installations titled Expeditions, which also includes Fantôme Afrique and Western Union: Small Boats. The film at Ruby City is loosely based on the story of late African American explorer Matthew Henson, who accompanied famed explorer Robert Peary on several expeditions to the Arctic in the late 19th and early 20th centuries.

The most famous of their treks was in April 1909, which historians believe was the first time any explorer reached the northernmost point on the globe — known as "true north." Henson reached their destination first, followed by Peary and four Inuit assistants.

"[True North] is like a documentary in that it gives viewers this historical information, but does it in a more artistic fashion," said Kelly O'Connor, Ruby City's head of collections and communications. 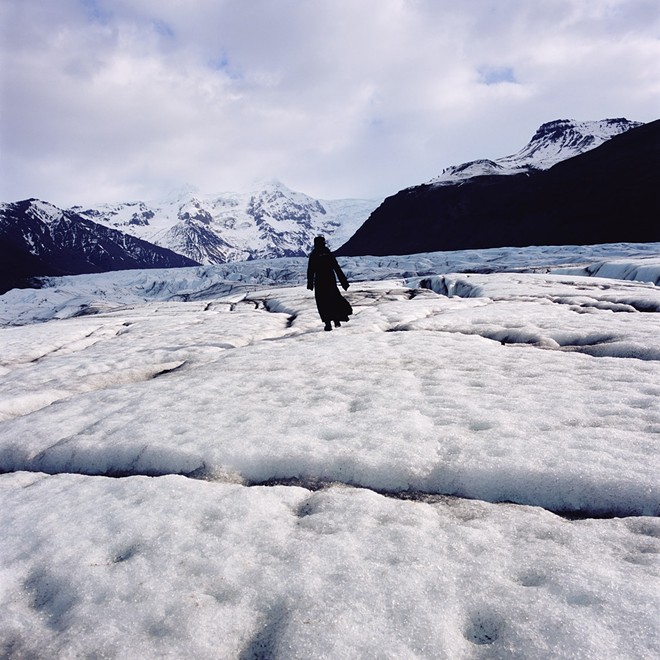 Unfortunately, upon the explorers' return to America, Peary took full credit for the groundbreaking expedition, and Henson and the group's Inuit fellow travelers received little public recognition for their contributions. In True North, Julien gives Henson the tribute he deserves by incorporating Henson's own words from his writings and other sources and by creating a striking wintery scene that surrounds viewers in a white veil of stunning video.

"[Julien] has created a true installation," O'Connor said. "With the sound, film and buildout of this environment, it's really an immersive experience and represents his original vision."

The narration heard in the film comes from Henson's 1912 book A Negro Explorer at the North Pole and from articles written about him in American History Illustrated in 1966. In his writings, Henson gives ample credit to the four Inuit people — Ootah, Egingwah, Seegloo and Ooqueah — who participated in the expedition.

Julien also makes bold artistic choices in True North by portraying Henson as a Black female explorer (Vanessa Myrie) and by excluding Peary from his narrative, just as Peary did to Henson more than 100 years ago.

Late San Antonio artist Linda Pace, whose foundation exhibits her contemporary art collection at Ruby City and other galleries, was the largest collector of Julien's films. The theater where True North is currently screening was designed specifically for his cinematic installations.

Julien, who became friends with Pace during a local residency in 1999, called her "the artist's collector," noting that as both a patron and a creator herself, "she understood our plight and what we need to make art."

Pace also understood what artists needed for a compelling exhibition. In Julien's case, the multiscreen theater created specifically for his installations at Ruby City is the type of platform that makes his work even more absorbing.