During a hearing, the Texas congressman tried to blame mass shootings on 'dang smartphones.' 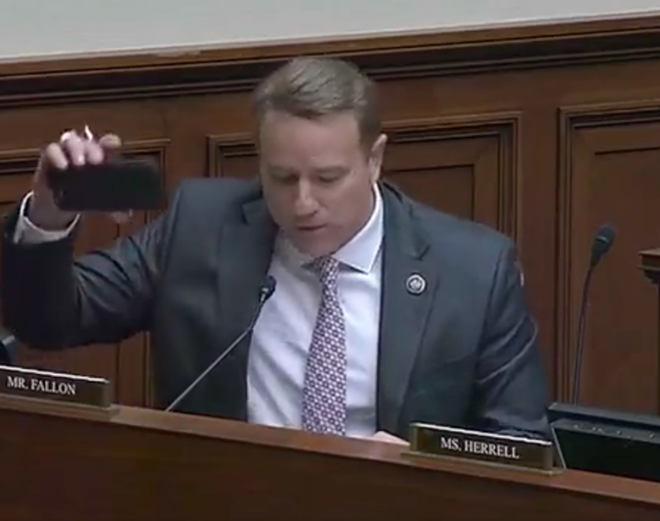 Screen Capture / U.S. House
U.S. Rep. Pat Fallon holds up a "dang smartphone" to show why the world is going to hell in a handbasket.

Is it just us, or are Republicans finally running out of things to blame for mass shootings? You know, other than fucking guns.

As evidence may we offer U.S. Rep. Pat Fallon, the Texas Republican dipshit who last week tried to push off the blame for the nation's rising gun violence on "dang smartphones."

Last week, during a U.S. House Oversight Committee, the genius posited that guns have always been plentiful in the good ol', God-fearing USA, yet mass-shootings at schools were "non-existent or extremely rare" until only recently.

"So what's changed in the last 50 years?" Fallon inquired, laying the foundation for his grand theory. "There's been a noticeable breakdown of the family, there's been an erosion of faith and there's been a seismic drop in social interaction in large measure due to the overuse of these dang smartphones and the proliferation of social media, which is probably better described as anti-social media."

Well, yeah. That and the fact that weapons intended for use on the battlefield are nearly as ubiquitous as smart phones in the U.S., can be purchased for about the same price and are available to pretty much anyone over 18 who wants one.

Keep up the thoughts and prayers, assclown. We'll be sure to pass them on to the parents of those 19 schoolchildren in Uvalde who were the latest victims of the nation's smartphone epidemic.