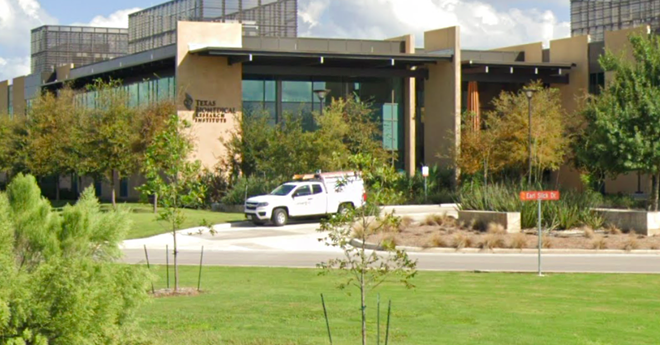 Google Street View
A scientist at Texas Biomedical Research Institute recently entered into a settlement agreement involving allegations that he falsified data.
Animal-rights group PETA has asked the City of San Antonio take back $10 million in pandemic-relief funds awarded to Texas Biomedical Research Institute after last week's revelation that the head of its primate lab admitted to research misconduct.

In a Tuesday letter to city officials, PETA argued that the U.S. Office of Research Integrity's finding that Texas Biomed's Deepak Kaushal falsified data in a paper and two grant applications should disqualify the facility from federal American Rescue Plan Act (ARPA) funding that city council approved in February.

A separate letter sent Tuesday by the group the Physicians Committee for Responsible Medicine also urged local officials to demand that Texas Biomed return the funding. The Current was unable to obtain a copy of that letter at press time.

"Over the past several months, many organizations and representatives addressed your committee and presented detailed requests for much-needed ARPA funds," PETA Senior Science Advisor Dr. Lisa Jones-Engel wrote in PETA's letter. "Director Kaushal was likely the only one who was actively being investigated by [ORI] for 'intentionally, knowingly and/or recklessly falsifying and fabricating' data and grant applications."

As part of a settlement agreement with ORI, Kaushal's research will be supervised for a year by a committee of senior faculty members. However, he's still serving as head of Texas Biomed's $40 million primate lab.

In an emailed statement, Texas Biomed officials said the recent ARPA funding supports both the institution's scientific research and the local community.

"We remain grateful to the city and the county for recognizing that the ARPA public health infrastructure funding will be transformative for our campus, the care of our research animals and for the continuation of our mission studying infectious disease threats, vaccines and therapeutics," the statement read.

In earlier comments to the Current, Texas Biomed officials said the alleged incidents of misconduct cited by ORI occurred before Kaushal's time at the institute and didn't involve animals under its care. They also said Texas Biomed is implementing training on research integrity to all scientific staff.

In its letter, PETA argues that local residents "spoke out overwhelmingly" against funneling ARPA funding to Texas Biomed. The group also notes that Kaushal himself was among those who offered testimony swaying Mayor Ron Nirenberg and members of city council to approve the funding.

After a contentious meeting, council voted 9-1 to approve $10 million in ARPA money for Texas Biomed. The research site was one of just three entities allowed to move to the front of the line for the funding, meant to help with pandemic recovery.

Other local groups seeking the funding were expected to undergo a slower approval process.

The council vote came after Texas Biomed last year sought an $11 million municipal bond to expand its infrastructure but withdrew its request after overwhelming pushback from residents and animal-welfare groups during public comments.

According to PETA's letter, the lab facility has racked up 17 violations of the federal Animal Welfare Act since 2015. The site also faced public scrutiny after it revealed to regulators that nearly 160 of its baboons suffered amputations from frostbite due to Winter Storm Uri.

"Texas Biomed has received more than $63 million in NIH taxpayer-supported funding since 2020," PETA's Jones-Engel said in the letter. "Unlike NIH funds, which the agency has at least some ability to investigate and then retract if/when blatant examples of malfeasance are revealed, we fear that Texas Biomed will have zero accountability for dispersed ARPA funds."