The wall-sized sticker was slapped onto a building in Southtown and resembles a similar large-scale image posted last year showing Cruz in bondage gear. 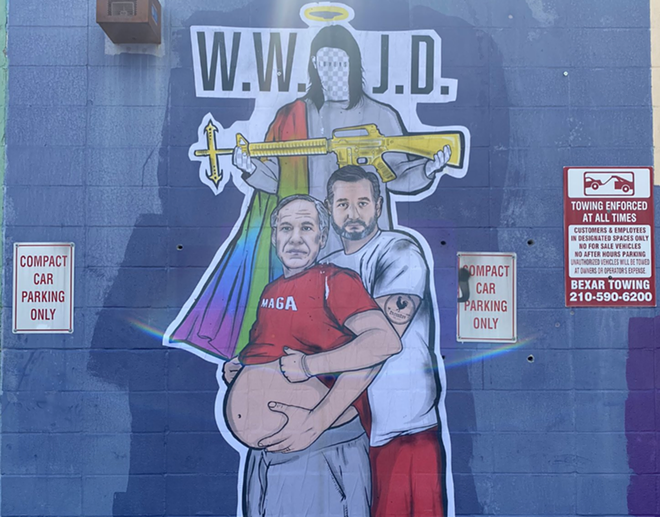 Twitter / @ENorris_2
The mural is stickered onto the wall of a building at 710 S. Flores St. in San Antonio's Southtown neighborhood.
Twitter users have a case of the giggles over a mural stickered onto the side of a San Antonio building that portrays a pregnant Texas Gov. Greg Abbott being embraced by U.S. Sen. Ted Cruz.

In the image, Abbott wears a red MAGA T-shirt with his belly exposed, while Cruz wraps his hands around the unwaveringly anti-abortion governor's baby bump. Texas' insurrection-inspiring junior senator also sports a Proud Boys tattoo on his left arm, a reference to the extremist group that took part in the Jan. 6 attack.

Behind the two Republicans is an outline of Jesus holding a golden assault rifle with the acronym "WWJD," meaning "What Would Jesus Do" framing his head.

It's unclear when the image first appeared on the wall of the Southtown building at 710 S. Flores St. or who's responsible for its creation. However, it appears awfully similar in material and subject matter to a wall-sized sticker of Cruz in bondage gear that appeared on the St. Mary's Strip in early 2021.

Whatever its origins, the piece of public art is receiving overwhelmingly positive reviews on Twitter.

Man I just past this going downtown

"San Antonio funny asf for this," tweeted user @ENorris_2 on Monday, becoming one of the first people to draw attention to the image on social media.

"Why are they both standing upright? Neither one of them has a spine," user @LEsquilinJ responded.


Why are both of them standing upright?

Neither one has a spine.

"If men could get pregnant we WOULD NOT BE HAVING THIS DISCUSSION," tweeted @GLGBUCKEYEBABE.


If men could get pregnant we WOULD NOT BE HAVING THIS DISCUSSION. https://t.co/NFR9hjOTNP

"I almost spit out my coffee LMAO!" user @MzLuvU4Eva added to the conversation.


I almost spit out my coffee LMAO! https://t.co/ABgnYdmn1E

Several Twitter users looped in news organizations such as CNN and late-night comedians including Jimmy Kimmel in hopes of spreading the love. Others inquired about how to get a bumper sticker of the image.

The artwork comes less than two months before the midterm elections, which will decide whether Texans let Abbott stick around for a third term. The incumbent still leads Democratic challenger Beto O'Rourke by 6.8 points, according to a recent Dallas Morning News poll.

Even so, the image of a pregnant Abbott may resonate with more Texans than polling suggests. A survey of 2,000 Lone Star State voters by Perry Undem, a data analytics group, found that 60% believe abortion should be available in all or most cases.

What's more, 9 out of 10 those surveyed agreed that Texas politicians are out of touch with their electorate.