Assclown Alert: Racing to the bottom with Govs. Greg Abbott and Ron DeSantis

Anyone questioning whether Gov. Greg Abbott is chasing the 2024 Republican nomination need look no further than his despicable actions last week to see he's all in. 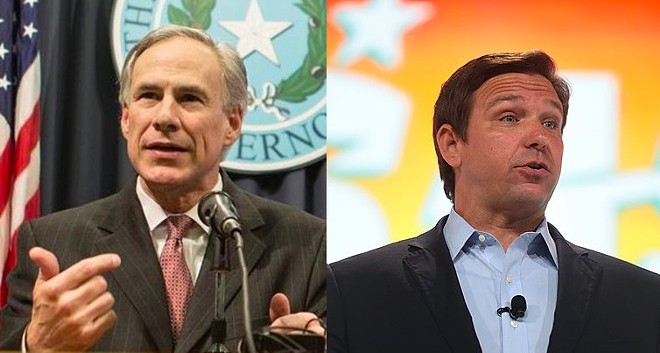 Anyone questioning whether Gov. Greg Abbott is chasing the 2024 Republican nomination need look no further than his despicable actions last week to see he's all in.

The following day, Abbott dumped two busloads of migrants at Vice President Kamala Harris' official residence. Subsequently, Abbott's office sent a statement to the Current saying he'd had discussions with DeSantis about his program of expelling asylum seekers prior to the Florida governor's Martha's Vineyard stunt.

And, not to be further upstaged, Abbott signed onto a letter by DeSantis and 20 other GOP governors urging President Joe Biden to scrap his plan to cancel up to $20,000 in federal student loan debt for Americans.

As justification, the governors claimed the plan would force hourly workers to "pay off the master's and doctorate degrees of high salaried lawyers, doctors, and professors." Never mind that people earning $125,000 or more annually are exempt or that those eligible to cancel more than $10,000 are required to be recipients of grants for low-income students.

Clearly, neither compassion nor truth are much of a consideration in Abbott's race to the bottom with DeSantis. Clearly, these two sewer dwellers understand that in the post-Trump Republican Party, such characteristics are political liabilities.