Sheriff Javier Salazar launched an investigation this week into flights chartered by Florida Gov. Ron DeSantis that transported migrants from San Antonio and stranded them in Massachusetts. 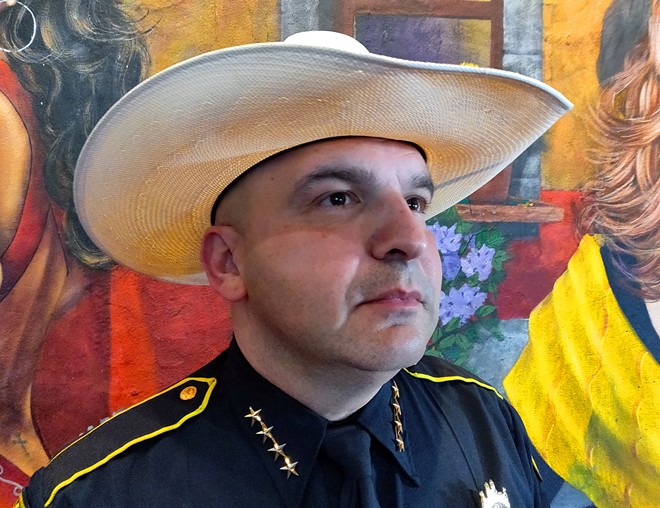 Jade Esteban Estrada
On Monday, Bexar County Sheriff Javier Salazar said he believes migrants were "lured" onto the flight to Martha's Vineyard under "false pretenses," in possible violation of the law.
The Bexar County Sheriff’s Office has stepped up security in the wake of threats made in response to Sheriff Javier Salazar's criminal probe of Florida Gov. Ron DeSantis’ Martha’s Vineyard stunt, Vice News reports.

Since Salazar revealed his investigation Monday, BCSO has fielded threatening emails and an influx of "hateful calls" to dispatchers, Vice reports, citing a statement from an office spokesperson.

“[A]s in any instance when our office receives threats, precautionary measures will be made for safety of all personnel,” the spokesperson said.

Last week, DeSantis — a likely frontrunner for the Republican presidential nomination — chartered two flights that carried 48 Venezuelan asylum seekers out of San Antonio and stranded them in Martha's Vineyard.

Salazar, a Democrat, said he opened an investigation because migrants said they were lured onto the planes under "false pretenses" that may violate the law. Some of the people transported to the East Coast resort community have told news organizations they were promised jobs and lodging.

Salazar isn't the only person who's questioned the legality of DeSantis' migrant-relocation efforts.

Some migrants flown to Martha’s Vineyard filed a class action lawsuit against DeSantis and the Florida Department of Transportation. In court documents filed Tuesday in Massachusetts, those asylum seekers allege that DeSantis and his accomplices engaged in a “premeditated, fraudulent and illegal scheme centered on exploiting [the migrants] for the sole purpose of advancing their own personal, financial and political interests.”

DeSantis pushed back against criticism of the flights, saying a provision in Florida’s state budget sets aside $12 million to fund a program for transporting people unlawfully present in the U.S. However, Salazar and others argue that migrants put on the flights are here legally since they have pending asylum cases.

Florida State Sen. Jason Pizzo, a Democrat, said he'll file a lawsuit against DeSantis to block migrant transport from Texas. The provision cited by the governor was only intended to relocate migrants out of Florida, not other states, he maintains.