At the 2022 Texas Tribune Festival, Buttigieg said the efforts of Gov. Greg Abbott and Florida Gov. Ron DeSantis in sending migrants to Democrat-led cities are 'hurting people in order to get attention.' 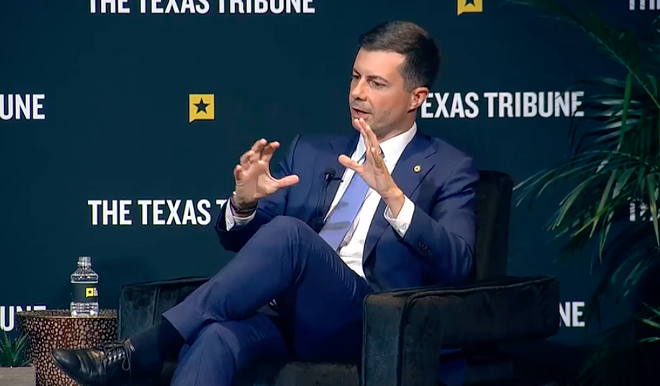 “Obviously, there are issues with the border and with migration,” Buttigieg said Thursday during the opening keynote of the 2022 Texas Tribune Festival. “But these are the kinds of stunts you see from people who don’t have a solution.”

Abbott has bused more than 11,000 migrants to cities including Washington, D.C., New York and Chicago. DeSantis followed suit last week when the state of Florida paid to fly migrants from Texas — allegedly luring them by promising housing and jobs in Boston — to the Massachusetts island of Martha’s Vineyard, where they were stranded.

Missing from Abbott and DeSantis’ tactics are any proposals to tackle the broader issue of immigration and border security, Buttigieg said.

“It’s not just ineffectual — it is hurting people in order to get attention,” Buttigieg said.

Buttigieg “knows nothing about Texas’ busing operations and needs to stay in his lane,” Abbott spokesperson Renae Eze said in a statement, noting that migrants willingly boarded buses to those cities.

“Instead of their hypocritical complaints about Texas providing much-needed relief to our overrun and overwhelmed border communities, the Biden Administration need to step up and do their jobs to secure the border — something they continue failing to do,” Eze said.

A spokesperson for DeSantis did not respond to an email Thursday evening requesting comment.

In a wide-ranging discussion with Texas Tribune CEO Evan Smith, Buttigieg, the first openly gay Cabinet member confirmed by the Senate, called out Sens. Ted Cruz and John Cornyn for vowing to vote against a bill to enshrine same-sex marriage in federal law.

“I’ve met both of your senators and your governor,” Buttigieg said. “I don’t know their spouses. I don’t really think about their marriages. But I can’t imagine a situation where I would attempt to undo one of their marriages. So what makes them think that they are fit to pronounce upon mine?”

Buttigieg said, “The question now for all of us living in America in these times is: Did we just live to see the high-water mark of rights and freedoms?”

Spokespeople for Cornyn and Cruz did not directly respond to Buttigieg’s remarks but pointed the Tribune to previous statements in which the senators express doubts that the Supreme Court would revisit and overturn its landmark 2015 decision legalizing same-sex marriage.

Same sex-marriage “is already the law of the land,” Cornyn told CNS News on July 21. “I think it’s a contrived issue because the Supreme Court decided the issue, so I don’t see any reason for the Congress to act.”

The bill is “not trying to ... address an affirmative threat to gay marriage, which people could be concerned about,” Cruz said on a recent episode of his podcast. “It’s engaged in politics.”

“You have a governor who, I mean, one minute they’re talking about parents’ rights, and next thing you know, they’re attacking parents, who when confronted with that sometimes disorienting and sometimes even frightening situation of your kid coming out to you, being in an incredibly vulnerable position trying to do the right thing for your kids and a government official wants to come and investigate you for trying to take care of your kids?” Buttigieg said.

Buttigieg has been criss-crossing the country touting the Biden administration’s $550 billion infrastructure bill, which passed with rare bipartisan support in a gridlocked Congress and stands as one of Democrats’ biggest congressional achievements since President Joe Biden took office. Texas is on deck to get a windfall of $27 billion for roads and bridges, $3.4 billion for public transportation, $1.2 billion for airports and more than $400 million to install chargers for electric vehicles.

The infrastructure bill contains $1 billion intended to reconnect communities across the country that are divided by highways. Community groups and activists have pressured Texas transportation officials to halt planned highway expansions in the state’s major metros including Houston, Austin and Dallas. A planned widening of Interstate 45 in Houston — displacing hundreds of homes and businesses — is under federal investigation for potential civil rights violations.

Buttigieg has largely stayed out of fights over freeway expansions in Texas and spats between state and local officials over infrastructure projects. In the past, he has declined to comment on the I-45 expansion, citing the investigation by the Federal Highway Administration.

“Part of what we’re doing with [the investigation] is making sure that the law is upheld and that communities are heard,” Buttigieg said. “A lot of our responsibilities and our powers are procedural to make sure that communities are not trampled in this process. So we’re going to respect the lawful role of the states but we are watching very closely to make sure that those responsibilities are upheld.”

Earlier this year, Buttigieg told the Tribune that expansions in places with high population and economic growth “are called for” but should be “done in a way that minimizes environmental and community impacts.” Automobiles will be a major mode of transportation for some time, he has said — which is why the country needs to accelerate its transition to electric vehicles and invest in other modes of transportation.

“Cars will always play an important role in our lives, but you should not have to bring two tons of metal with you everywhere you’re going,” Buttigieg said Thursday night.

Before Buttigieg took the stage at the Paramount Theatre in downtown Austin, climate activists from the Texas Gulf Coast demonstrated across the street, calling on Buttigieg to reject permits for six proposed fossil fuel export terminals along the Texas and Louisiana coasts — which he has the authority to do — on the grounds that the resulting pollution would harm residents’ health, drive up energy costs and exacerbate climate change.

Inside the auditorium, activists briefly unfurled a banner that said, “Please, Pete, No Fossil Fuel Exports” before they were ushered out.

Buttigieg declined to comment directly on the projects but noted the agency has received thousands of comments about the proposals.

“I hear you,” Buttigieg said.

Disclosure: Paramount Theatre has been a financial supporter of The Texas Tribune, a nonprofit, nonpartisan news organization that is funded in part by donations from members, foundations and corporate sponsors. Financial supporters play no role in the Tribune’s journalism. Find a complete list of them here.