At the hastily announced meeting, bar owners, staff and patrons said the city's proposal hit them by surprise and could damage their livelihoods. 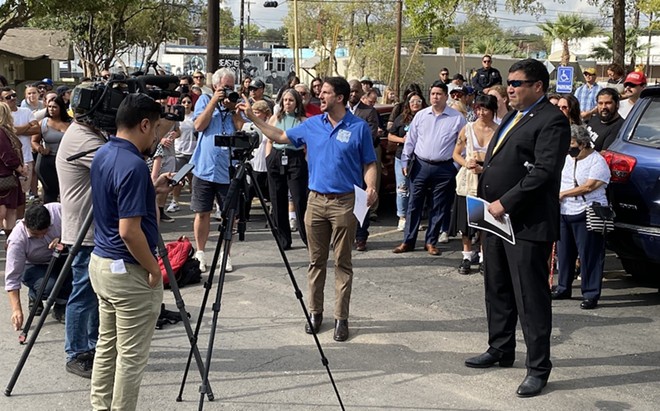 Sanford Nowlin
District 1 Councilman Mario Bravo tries in vain to quiet hecklers in the unruly crowd.
A crowd of St. Mary's Strip business owners and their supporters pushed back at a city plan to ban overnight parking near the popular nightlife area as a Saturday morning meeting to discuss the proposal boiled over into chaos.

District 1 Councilman Mario Bravo and San Antonio Parking Enforcement Manager Martin Ruiz endured catcalls, boos and derisive laughter as they offered up vague details about a year-long pilot program that would grant free parking permits to residents near the Strip but prohibit anyone else from parking overnight.

For years, residents of the nearby Tobin Hill neighborhood have voiced concerns about nightclub patrons blocking their driveways, dumping trash in their yards and creating public safety concerns.

However, business operators, patrons, employees and musicians at the hastily announced Saturday meeting said the proposed ban hit them by surprise. They argue the move would be a gut punch for bars and restaurants already reeling from the pandemic and the glacial pace of a construction project that's left St. Mary's Street looking like a war zone for months.

"I wanna talk to my neighbors, I wanna speak to the community and I wanna offer solutions that aren't as performative as this bullshit," Aaron Peña, owner of St. Mary's Strip bar Squeezbox, said to applause from the crowd of a few hundred people crowded into the parking lot of St. Sophia Greek Orthodox Church.

Arguing that the city-organized meeting was fruitless, Peña invited residents and business owners to Squeezebox for coffee and tacos to discuss alternate ideas. He also disputed claims by Bravo and Ruiz that the pilot project wasn't yet scheduled for a city council vote, saying he'd seen it on the Oct. 20 agenda.

Bravo tried to alternate speaking time between residents and people who opposed the ban. During their chance to talk, several homeowners said the neighborhood continues to face health and safety issues brought on by gunfire, public urination and fights.

Longtime resident Gabriel Rivera urged residents and businesses to work together on a solution. He recounted how his elderly parents had difficulty getting out of their home during a recent medical emergency.

"I understand what it's like to be in a bar that's empty and you're not making any money, not putting in cash in your pockets because you're relying on those tips. I get it," he said. "But, also, I get the fact that it's very difficult to live on these streets."

Sanford Nowlin
An opponent of the parking permit proposal expresses his concern about what it will mean for businesses, patrons and employees.
Bravo struggled to keep the crowd orderly, promising that the city also plans to hold a 2 p.m. Oct. 8 meeting at San Antonio College's Victory Center. That one, he assured attendees as the sun beat down on the church parking lot, would have air conditioning and a public address system.

He was greeted with mocking laughter after he acknowledged that the 10 a.m. start time for Saturday's event might have been too early for workers at bars and nightclubs.

At another point, Bravo asked how many people in the crowd opposed the parking ban. The majority raised their hands.

"I think what you see right now is the result of good faith evaporating — a trust in this process evaporating," Paper Tiger, Midnight Swim and Little Death owner Chad Carey told Bravo.

During his time on the floor, Democratic State Rep. Diego Bernal argued for a delay in the pilot program. The city threatens to further divide neighbors and business owners if it moves ahead without hearing other possible solutions and seeing what alternate parking options it can open up, he added.

"If we can all agree that we want some sort of harmony, some sort of equilibrium, some sort of coexistence, then let's make that the center," said Bernal, whose district includes the Strip. "Go back, come up with a variety of solutions and proposals, bring them all back together and have a talk about that."

Some in the crowd asked Bravo to commit that council would delay a vote on a parking ban until after October and that the city would authorize an economic study first.

Bravo agreed to the first request and said he would ask City Manager Erik Walsh to approve the second.

Around 11:30 a.m., the gathering dissolved — not because the councilman called it to a close but because Squeezebox's Peña announced he was departing to his bar to meet with neighbors.

As attendees filtered out, Tobin Hill Neighborhood Association Interim President Alfonso Robalin said he was willing to hear out more debate and alternate solutions — but not indefinitely.

"I'm OK with having more discussion on the parking permit, but it can't be put off forever," Robalin said. "The residents have been waiting for years for some sort of solution." 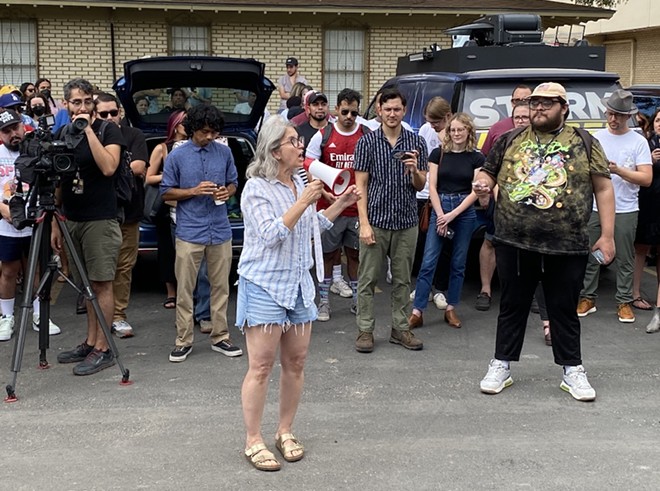 Sanford Nowlin
A resident speaks up about her concerns over late-night gunfire and other safety issues.
Stay on top of San Antonio news and views. Sign up for our Weekly Headlines Newsletter.
© 2023 San Antonio Current