The rookie cop initially said he was struck by the teen's vehicle, but newly released body-cam footage suggests otherwise. 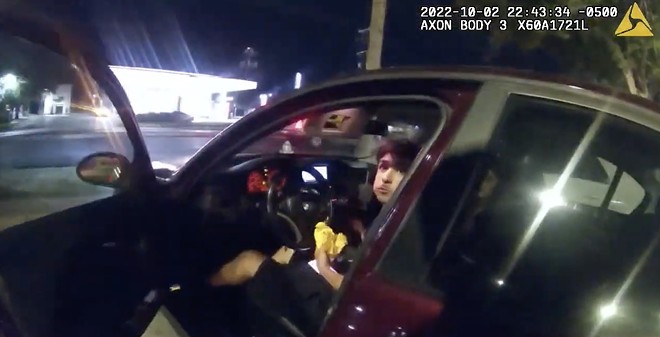 YouTube / San Antonio Police Department
The injured teenager was brought to University Hospital in critical condition, according to MySA.
Editor's Note: This story was edited to reflect that it's unclear from the body-cam video whether the driver put his car in reverse or it rolled backward because his foot left the brake pedal. The word "suspect" has also been removed and other details have been edited to more accurately reflect what can be seen in the video.

A San Antonio police officer who shot and wounded a teenager Sunday in a McDonald's parking lot has been fired after newly released body-cam footage appeared to contradict the cop's initial report, MySA reports.

SAPD rookie James Brennand initially said he fired his weapon after the teen struck him with his vehicle, according to police reports obtained by MySA. However, in body-cam footage posted by the department, it appears the teen — who's recovering in hospital — never struck the officer.

Brennand, a probationary officer with seven months on the force, was at a McDonald's in the 11700 block of Blanco Road for an unrelated call when he thought he recognized a vehicle in the parking lot that allegedly evaded him during a pursuit the night before, according to MySA.

Brennand initially said in an incident report that he fired at the vehicle after he was struck by the driver who was trying to evade capture, the news site reports. However, raw body cam footage released by SAPD on Wednesday appears to contradict those claims.


As seen in the footage, the rookie officer approaches the car and opens the driver's side door, where he finds a teenager eating a burger. Brennand orders the youth out of the vehicle. The teenager puts his hands on the steering wheel and responds to the officer's request by asking, "Why?"

The vehicle of the teen driver, whose identity hasn't been made public, rolls backward while the officer shoots five times. It's unclear from the clip whether the driver shifted the car into reverse or rolled backward because his foot left the brake pedal.

Brennand then radios "shots fired" before shooting at the car another five times.

In the clip, it doesn't appear that the vehicle ever struck Brennand.

The vehicle and its driver were later found down the road, and the victim was taken to University Hospital in critical condition, MySA reports.