The Latinx advocacy organization also called on the Justice Department to open an investigation. 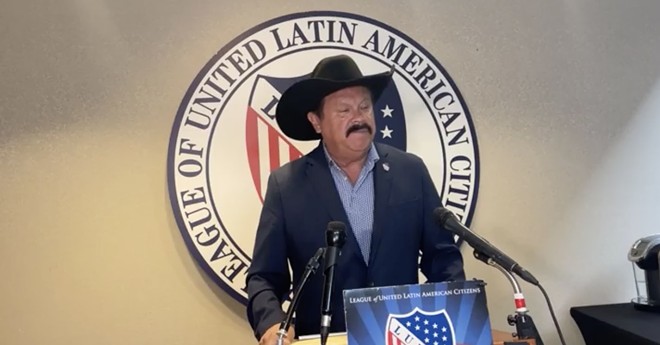 Facebook / Domingo Garcia LULAC National President
LULAC's Domingo Garcia speaks to reporters at a press conference in Washington, D.C., on Oct. 5.
The League of United Latin American Citizens is doubling its reward to anyone who helps track down the woman who allegedly recruited migrants onto flights from San Antonio to Martha's Vineyard.

Domingo Garcia, national president of the Latinx advocacy group, told reporters during a Wednesday press conference that it's raising boosting its cash offer for information that leads to the woman to $10,000 from $5,000.

Earlier this week, the New York Times identified the mystery woman as San Antonio native Perla Huerta, a former army medic. Although the Bexar County Sheriff's Office hasn't confirmed Huerta as a suspect, sources familiar with the investigation told the Express-News she is a person of interest.

In addition to boosting its reward, LULAC on Wednesday filed a complaint with the Department of Justice, demanding that Attorney General Merrick Garland open a criminal investigation into Huerta along with Florida Gov. DeSantis and Texas Gov. Greg Abbott.

"It's time Perla Huerta goes before a grand jury and answers who hired her, who paid her and what was her purpose of her mission," Garcia said at the press conference.

Last month, Bexar County Sheriff Javier Salazar launched an investigation into the Martha's Vineyard flights, which were arranged by DeSantis. Salazar said the migrants were lured onto the planes under "false pretenses" that may have broken the law. Some of the stranded migrants told reporters they were promised jobs and lodging.

DeSantis reportedly arranged the flights after making contact with Texas' Abbott, a fellow Republican. Abbott has made anti-immigrant rhetoric a key part of his reelection campaign and chartered numerous buses to ship migrants out of the state.

According to an investigation by Express-News, Perla's last known residence was a condo in Tampa.

"Texas Governors Greg Abbott and Florida Governors Ron DeSantis are the real shot callers in this disgusting exploitation of innocent human beings," Garcia said in a statement. "LULAC urges the U.S. Department of Justice to conduct a rigorous and transparent investigation into these elected officials' potential civil and criminal violations."