'It's exciting being part of the first Mexican team affiliated with the NBA,' said Mendez-Valdez. 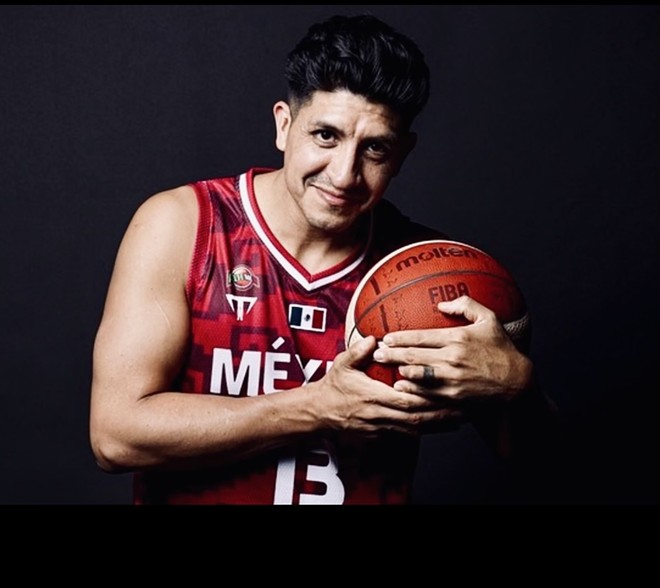 When Orlando Mendez-Valdez attended Tafolla Middle School in the late '90s, he regularly got rides to his West Side home from his PE teacher.

Mendez-Valdez was so embarrassed of his family's tiny, ramshackle house near Alazan Apache Courts that he'd ask to be dropped off a block away. At the time, basketball seemed like the only way to keep his mind off the violence, addiction and grinding poverty around him.

Since then, the sport has carried Mendez-Valdez, 36, far from his humble origins.

The athlete is now looking to close out a professional hoops career that will end with him playing in the inaugural season of the Mexico City Capitanes, the first Mexico-based team in the G League, the NBA's 30-team minor league basketball organization.

The team's inclusion in the G League means he'll be able to play his first professional games in the United States, including two scheduled in Austin. Those games will be the first the PE teacher who used to drive him home — a man Mendez-Valdez now regards as a father figure — will get to see him play since 2009.

"It's exciting being part of the first Mexican team affiliated with the NBA," said Mendez-Valdez, a 15-year veteran of pro basketball. "Secondly, my father hasn't seen me play in person since I was in college. Closing out my career, playing down the road from my hometown, getting my friends and family to see me play means the most."

Mendez-Valdez's decision to walk away from the game comes at the dawn of a new era in Mexican basketball — one for which he helped lay the foundation.

He helped lead the Mexican National team to a gold medal in the 2013 FIBA Americas championship — its first such win and its first qualification for the FIBA Basketball World Cup in 40 years.

Aside from playing for the national team, Mendez-Valdez excelled elsewhere, winning a league championship with the Soles de Mexicali in 2018. He earned MVP honors that year, which led to a year with the Capitanes in 2020.

The Capitanes were originally positioned to join the NBA's G League that same year, but the pandemic delayed the team's absorption into the league. Mendez-Valdez continued to play abroad, including a stint in Uruguay.

Although Mendez-Valdez's age means he probably won't have an abundance of court time during his first and final season in the G League, he's excited to spend that time as a mentor to his younger teammates.

Before basketball paid the bills, Mendez-Valdez longed for a chance to escape an upbringing surrounded by violence and crime.

The upbringing was so gritty that Mendez-Valdez's mother ultimately asked Abel Valdez, the Tafolla Middle School PE teacher who mentored him, to take custody of her son. The young Mendez-Valdez eventually adopted his guardian's last name, hyphenating it with that of his mother.

"[Valdez] has been a pinnacle to my life, whether it'd be through sports, as a young adult to now: he's a father figure to me," Mendez-Valdez said. "At those stages, it was about being able to take myself out of my environment and away from my friends in that area, doing what they were doing ... ."

Although Mendez-Valdez spent hours on end shooting hoops at a nearby park as a sanctuary, it wasn't until he entered Valdez's guardianship that he was exposed to organized basketball. Participation in the sport helped him understand there was a world outside of his neighborhood.

"When he was in middle school, he had never really left the West Side," Valdez said. "Taking him to the movies or somewhere like Marble Slab [Creamery], to him, was just amazing. It just opened everything up to him. All he knew was just a little section of the West Side."

From WKU to Mexico

During that time, a visit to his mother's home reinforced the importance of staying on track and pursuing his dream. An old friend from elementary school dropped by, looking to sell something for extra cash. He looked sickly, so emaciated he was barely recognizable.

It was a reminder to Mendez-Valdez that he too could have fallen into addiction had he not found basketball. When the young man left, Mendez-Valdez wept.

"Overall, I just hope my story gives hope," Mendez-Valdez said. "My whole career is based on faith in myself and in God. I hope for those who come from similar circumstances as I did to see me and surpass me — to go further than me."

Ultimately, Mendez-Valdez's dedication to basketball helped him land an athletic scholarship to Western Kentucky University in 2005. His time with Lanier had made him the Express-News Player of the Year, and the high school retired his jersey in 2009 based on his stellar career.

He graduated as a four-year student athlete with a bachelor's degree in physical education. That same year, he got a call from the Golden State Warriors to play with its summer league. However, still recovering from a torn meniscus suffered his senior season, Mendez-Valdez took a pass for fear of doing further damage to his knee.

He also weighed an opportunity to play for the Austin Toros, now the Austin Spurs, but headed south of the border, where the pay was better. He also considered the Mexican leagues a better place to build his own legacy — and that turned out to be the case.

After his season with the Capitanes, Mendez-Valdez plans to return to San Antonio and get his real estate license. He looks forward to spending more time with his wife and two daughters.

But he doesn't rule out returning to the sport that carried him away from his hardscrabble beginnings. Once his daughters are in college, he may seek a coaching or administrative role in basketball.

Until then, his farewell tour as a pro player will end on a historic note as the Capitanes bridge the gap between the NBA and Latin America.

"I never thought I would be able to take basketball this far, making it a career, a living," he said. "I just want to be remembered as a fighter. I had a lot of hope — and I was a fighter."