The show was a reminder of the band's lasting legacy in metal and hard rock. 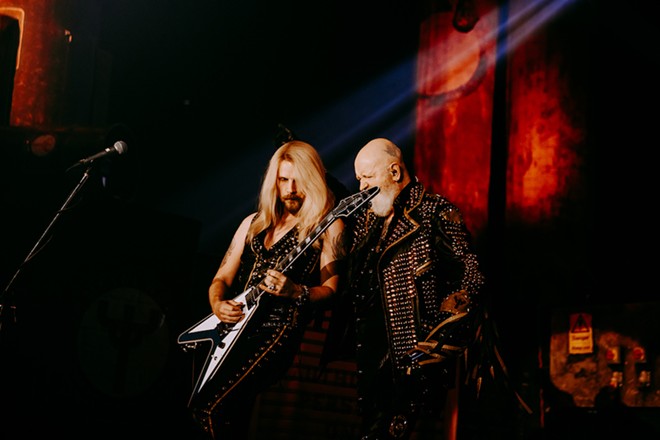 Oscar Moreno
Judas Priest's Richie Faulkner and Rob Halford share a metal moment.
Be sure and check out the Current's photo gallery of the concert.

On Tuesday night at Tech Port Center + Arena, the members of Judas Priest demonstrated why — an unbelievable five decades into the band's career — they're still metal gods.

Surrounded by a towering set modeled after the metal foundries of its hometown of Birmingham, England, Priest trotted out the expected hits ("You've Got Another Thing Comin'," "Living After Midnight") while showcasing dynamic early material ("Beyond the Realms of Death," "Genocide") and high-intensity gems from more recent albums ("Firepower," "Halls of Valhalla").

The performance — the first of two Alamo City shows on the group's 50 Heavy Metal Years tour — served as a lengthy career retrospective showcasing the timeless appeal of crushing riffs paired with ace musicianship and stadium-ready choruses. It also was a reminder of why the band's sound became the template not just for the metal explosion of the early '80s but also for myriad harder-edged acts that followed.

While Priest is down to two original members — frontman Rob Halford and bassist Ian Hill — guitarists Richie Faulkner and Andy Sneap, along with drummer Scott Travis, brought a blazing intensity to the proceedings. Faulkner's solo on the 1978 cult classic "Beyond the Realms of Death" was singularly epic.

The 71-year-old Halford relied on his throaty lower register more than he did during the band's '80s heyday. Just the same, the white-bearded frontman proved himself capable of delivering the ear-splitting falsetto shrieks that have long been his trademark.

And even if he moves a little slower these days, Halford's ability to work a room is undiminished. The audience erupted with cheers and raised devil horns as he rode his Harley onstage during the opening riffs of "Hell Bent for Leather," the first tune of a three-song encore that left the crowd of 3,200 clamoring for more.

During a lengthy talk before the set's finale, Halford gushed about the band's love for San Antonio, namedropping Joe Anthony, the late KISS-FM DJ who helped break the band in the U.S. The cheers made it abundantly clear the local metalheads love Rob right back.

Opener Queensrÿche kicked off the evening with a career-spanning set that concluded with "Eyes of a Stranger," the fan favorite finale from its 1988 concept album Operation Mindcrime. Singer Todd La Torre, who replaced original vocalist Geoff Tate in 2012, proved himself up to the task.