Comedian Louie Anderson On Starting the Third Act of His Life

Courtesy
Emmy-Award winning comedian Louie Anderson (FX's Baskets) will make a tour stop at the Tobin Center for the Performing Arts on Sunday, March 26.
Although considered by many to be at one of the high points of his 30-year-career as a stand-up comedian, Louie Anderson wouldn’t mind if journalists scrapped the word “resurgence” for something a bit more poetic.

“This isn’t really a resurgence,” Anderson, 63, told the Current during a phone interview earlier this month. “This is a brand new third act of my life. It’s like the window has opened and people can hear me. They have rediscovered me.”

What they have rediscovered is Anderson doing what he has been doing ever since he made his professional TV debut on The Tonight Show Starring Johnny Carson in 1984—making people laugh. The only difference this time is that he’s doing it while wearing colorful blouses.

In the hit FX comedy series Baskets, Anderson, who is making a tour stop at the Tobin Center for the Performing Arts on Sunday, March 26 at 7pm, plays Christine Baskets, the mother of twin brothers Chip and Dale Baskets (both played by Zach Galifianakis). The role earned Anderson an Emmy for Outstanding Supporting Actor in a Comedy Series last September.

“Early on, I had a lot of press, but the press I am getting now is like Fresh Air [National Public Radio] and some serious writers,” Anderson said. “People have been touched by this character.”

Anderson found his inspiration for Mrs. Baskets from his late mother. He said if she were here today, she would approve, but might have something to say about some of the character’s reactions. 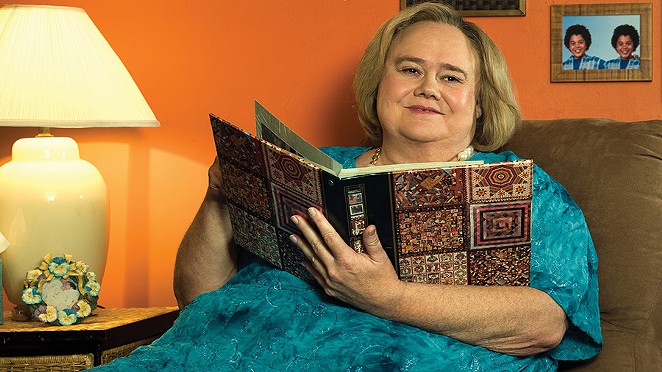 FX
Anderson plays Christine Baskets on the hit FX comedy series Baskets.
“I think she’d really like it, but then she’d try to correct me,” Anderson said. “She’d be like, ‘You know, when you do that one thing, Louie, it’s not the same way I would do it.’ But she would feel special because it’s definitely a homage to her.”

While Anderson has found success on Baskets, which was recently renewed by FX for a third season, he’s the first to admit stand-up comedy is still his “first love” and “the thing [he] would put at the top of [his] résumé.” It’s especially true since Baskets has introduced him to a whole new audience not familiar with his stand-up career or other past projects like his small but hilarious role in the 1988 comedy Coming to America or his 1990s animated show Life with Louie.

“Now, there is a whole new group of people getting to see me,” Anderson said. “That gives me a boost.”

With his stand-up performances, Anderson wants audiences to leave their troubles at the door and enjoy a good, clean show. That means, for the most part, putting politics aside. It just isn’t something that really interests him as a tool for his comedy, although, he said, he does a great impression of President Donald Trump on stage.

“So many [comedians] are doing the political stuff and I’m glad,” he said. “I think there’s an appetite for it, but my appetite is for a taco shell made out of chicken.”