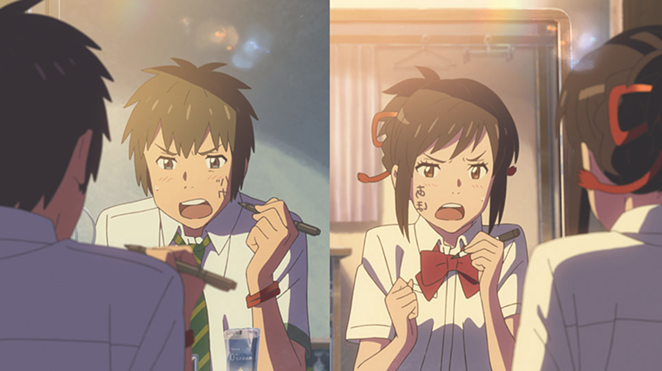 1) Your Name.
In a year filled with films that successfully cohabited honest humanity with the supernatural, this animated teenage symphony to God from Japanese director Makoto Shinkai rises above them all. Restless yet wise, the film plays like a Studio Ghibli version of an emotionally loaded, metaphysical mind-scrambler like Eternal Sunshine of the Spotless Mind or Donnie Darko.

2) Good Time
Robert Pattinson has made some bold choices in recent years, preferring to work with outsider directors instead of cashing in on his fame, but he continued to exude a low-energy indifference until his startlingly brilliant turn in Josh and Benny Safdie’s outrageous urban nightmare.

3) Personal Shopper
Sign that we’re living in the last days, No. 7,830,268: the two best lead performances of the year so far were delivered by the stars of the Twilight franchise (cue the locusts). Kristen Stewart re-teams with Clouds of Sils Maria writer-director Olivier Assayas for this entrancing and unsettling story of a medium trying to connect with her recently deceased twin brother.

4) A Ghost Story
The most literal ghost movie of 2017, but also the most unexpectedly challenging, as director David Lowery conjures supernatural cliches (including spirits in white sheets with holes for eyes) only to rewire them into this Linklater-meets-Kubrick story of the timelessness of grief.

5) Get Out
As the darkest recesses of white privilege and hate continue to strut their stuff on the national stage, Jordan Peele’s smart, funny and stylish Black Lives Matter horror movie only grows more pungently cathartic.