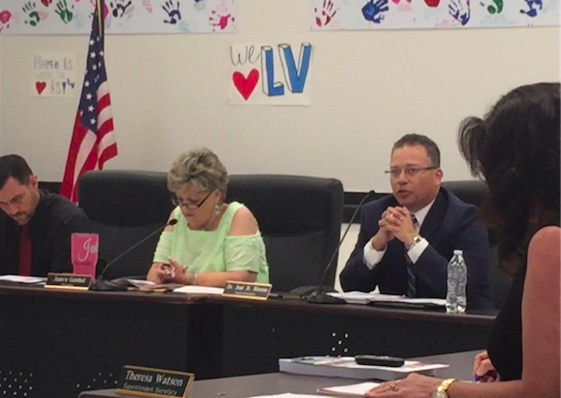 Alex Zielinski
Jose Moreno speaks at a LVISD board meeting in April
The superintendent of La Vernia Independent School District has resigned after a year plagued with staggering sexual assault allegations out of La Vernia High School.

Jose Moreno resigned after the district's Board of Trustees held a public hearing Thursday evening to evaluate his 3-year stint at the district — and then voted to "invite" Moreno to resign.

"The board gave no reasons for the decision," the La Vernia News posted on Facebook.

According to the News, no one in the audience spoke out against Moreno prior to the vote — only in praise of the superintendent's leadership through a particularly rocky patch.

In March, police arrested 13 members of LVHS male varsity teams for the alleged sexual assault of more than 20 younger male students. According to victim testimony, the suspects called anally raping boys with various objects "hazing." Police, and the Texas Rangers, didn't see it that way.

Police estimated this kind of 'hazing' had been going on for more than three years at LVHS — both on and off campus. For parents, the idea that coaches or teachers may have known about this and brushed it off was infuriating. They turned to Moreno for explanations and solutions.

At least one family of a young victim sued the school district, accusing school officials of turning a blind eye to a series of “sadistic hazing rituals." Moreno gave parents little to work with, saying he couldn't discuss an open investigation.

“All children deserve due process and the privacy they’re entitled to," he told a packed room of parents and students at the first board meeting after the arrests. He did not fire any employees after the allegations, but nearly 30 LVISD employees have resigned or retired in 2017 alone.

Since the early-2017 arrests, two other cases of sexual abuse have risen from LVHS' halls. In May, a high school student was arrested for allegedly filming child pornography on campus. Four months later, a LVHS math teacher was sentenced to 12 years for distributing child pornography.

But it's still unknown what drew the board to vote Moreno out, especially with so many parents behind him. In Facebook comments, angry parents of LVISD kids accused the board of ignoring the community's needs — and just making Moreno the scapegoat for the years' scandals.