Beyond the Bag: Catching Up with San Antonio Roasters on the Latest and Greatest in the Local Coffee Scene

Bryan Rindfuss
If we’re to believe the angry throng of coffee-lovers that swarmed La Villita earlier this month, San Antonio loves its coffee. Needs its coffee. Has to have its coffee.

And coffee lovers are a disparate crowd. Fans range from dabblers ditching Starbucks and looking for a caffeine fix at their local coffee shop, to hardcore coffee fans with only the finest burr grinder on their kitchen countertops.

Since our last coffee issue in August of 2015, we’ve tried keeping up with the blooming bean scene and its thirsty audience. Local Thursday Night Throwdown latte art competitions began in October 2015 and recently celebrated their second anniversary of area baristas battling it out for bragging rights as to who can corral frothy milk and espresso into veritable artwork.

Since 2015, Estate Coffee opened and started roasting on the Eastside; Brown was featured in a documentary, Local took over a Starbucks, opened a shop in Shavano Park and headed further north to Austin where they’re known as Merit Coffee (after their roaster); CommonWealth said bonjour to Mission hospitals, took chickens and turkeys (!) to Hemisfair and is days away from opening at Weston Centre; Rosella opened at the Rand, several H-E-Bs, and Methodist Hospitals and is expanding into the San Antonio Botanical Garden; Café Martinez made its first appearance in the U.S. in the Medical Center; and What’s Brewing became one of the largest solar-powered coffee roaster in the state. Of course it hasn’t all been gains. Fairview, Press Coffee, Aspen Brew and Mildfire Coffee Roasters closed their Medical Center location (though the latter operates the original shop off Huebner, now using a lever espresso machine). Owner Mark Sobhani, who opened the shop in 2005, is still encouraged by the onslaught of bean-hungry San Antonians.

“It’s definitely a more knowledgeable audience,” Sobhani said, “Once you learn what good coffee should taste like, more and more people are getting spoiled on good coffee and seeking it out.”

For this go-round we caught up with area roasters who are keeping San Antonio caffeinated to keep tabs on what the city holds for the future of coffee. 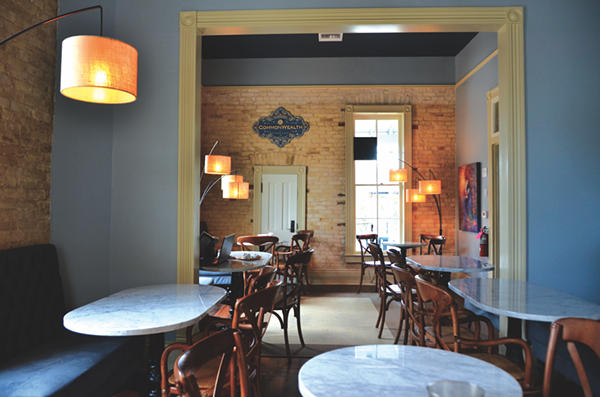 
Roger Chbeir and his family first launched San Antonio’s oldest operating coffee roaster, What’s Brewing? Coffee Roasters in 1981 inside Central Park Mall. In 1997, now-head roaster Sami Chbeir began roasting with brother Tony and the elder Chbeir. In 2000, the operation moved into an 11,000 square foot facility, and retail launched in 2005 (after closing their second shop off Nacogdoches and a small space in the heart of downtown).

“We’ve been a family business, kind of stubborn about just roasting coffee and doing wholesale,” Sami said. The business includes varieties for Chacho’s, decaf beans for Liberty Bar, Cappy’s and La Fonda and even Bliss.

Fast-forward to 2015, with the addition of two key staff members, Chris Brown and Mo Allawala, who spurred a wave of change for the longtime roaster. “The short story of it is I let these kids create a new vision for us,” Sami said. “They pushed for this logo change, new branding.”

Tony, now the warehouse manager, decided to shake things up and tear walls down, opening up the retail space to include a bright new café, access to eight classic pinball machines (some sourced from a neighboring arcade from the original location), and opening up the roasting room so customers can watch Sami in action.

In order to power their new open warehouse, Allawala convinced the Chbeirs to own their power and go solar. Last October, the Chbeirs commissioned solar panels for their roof from One80Solar, making it one of the largest solar-powered coffee roasting facilities in Texas. The 132 solar panels produce enough energy to power eight average-size homes. 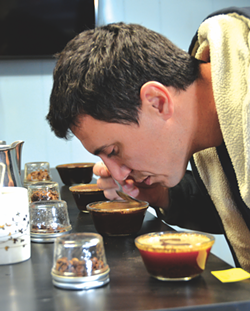 Jessica Elizarraras
Sami Chbeir of What's Brewing?
Now fully solar-powered, What’s Brewing is attracting fans new and old, some as far back as their old Central Park Mall days, with Pinball Night, stargazing nights, hosting Thursday Night Throwdowns (“paint was still drying when we hosted in November,” Sami said) and an expanding line of roasts, which they share on their robust social media pages. This January, What’s Brewing supplied 250 pounds of beans to the 40th annual Cowboy Breakfast, a Brazilian and Colombian blend that’s easy to brew and doctor with cream and sugar.

Down the road next to Weathered Souls Brewing Co., Úniko Coffee (formerly Ferra Coffee) is preparing to make a move into a larger production facility within the next month.

Owned by Licensed Q Grader (certification from the Coffee Quality Institute) Susan Jaime, the roaster first opened in 2010. These days it won’t be solely beans making the jump. Uniko’s business model means the team of three roasts beans, sources tea and also distributes new gadgets to businesses across the region.

“What we’re bringing to the table is that we’re very good at designing, blending and creating products that are very unique and available for everyone to enjoy,” Jaime said.

As coffee roasting turns from hobby to a full-fledged business for some area roasters, the influx of small-batch coffee really makes you take it all in. There are 14 coffee roasters in San Antonio — that we know of — and the number only grows.

Merit Coffee, which began roasting for Local Coffee shops in town in 2015 out of a small outpost on South Presa, currently carries six varieties of single origin coffees sourced by Jamie Isetts. This doens’t include a Hotel Emma variety from Guatemala and a Morgan Geisha varietal currently found in shops (read more about her on page 31) across San Antonio (six total, including a former Starbucks) and now Austin with more on the way.

Rosella Coffee Co. technically joined the roasting race in 2016. Though the company sources their own beans, Rosella’s blends and single-origin offerings are roasted at Austin Roasting Company by owner Jess Haynie.

“We didn’t really make an announcement when we switched over,” said founder Charles Gonzalez. “We wanted to have more control and autonomy over the longterm.”

Currently, Rosella carries three blends and three single origin roasts. Bags can be found at either Rosella location (Jones or Houston), and Central Market. You can explore Rosella’s beans at Battalion, Signature or Henrietta’s inside La Cantera Resort. 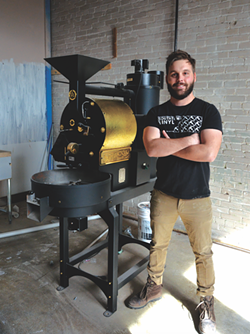 The 1,300-square-foot space will also serve as a roasting facility with Laughlin using a San Franciscan roaster that can process 20 pounds in an hour.

In Southtown, White Elephant Coffee moved into its location off St. Mary’s and Carolina in 2015 and has been steadily racking up awards for their roasts including a bronze for milk-based lattes from last year’s Golden Bean Coffee Brewers and Roasters Conference. They took home silver in 2016’s conference for their single origin espresso.

Over on the city’s far northside, Quantum Coffee Roasters will also move into a dual coffee shop/roasting facility this spring. Owned by Fidel Moreno, a physics instructor at Northwest Vista College and Clark High School, Quantum Roasters has collaborated with Chocollazo, Cactus Land Brewing, Southerleigh Fine Food & Brewery, Branchline and Cibolo Creek Brewing in Boerne. Find them weekly at the Farmers Market at the Cibolo at Herff Farm, Chocollazo and the Cibolo Nature Center and Farm.

The Leon Valley area is also getting into the mix with Caferros, a roaster that deals exclusively with Colombian coffee. The family-run operation, owned by Gil Jimenez, wife Monica and son Jake, has access to more than 2 million coffee trees through a co-op and direct trade. Caferros is currently only available for wholesale and for online purchases as they look to get into H-E-B and Central Market. 
San Antonio’s coffee future, as we navigate single origin, blends, direct trades or co-ops, seems bright. And you only need to visit the headquarters of Pulp Coffee to find out why. Located inside the LocalSprout Food Hub off Chestnut Street, Pulp’s 700-square-foot location is where the magic happens.

As a private label wholesale manufacturer of roasted coffee and organic teas, Pulp has roasted coffees for restaurants in San Antonio, including specialty brand and beyond with accounts throughout California and Austin.

“But this is the year for Pulp as a brand,” said owner James Mireles.

With more than 20 years experience in coffee, and cutting his teeth in Australia and California. To say Mireles loves coffee is an understatement: he and wife Liza Moreno-Mireles hosted a pop-up wedding on International Coffee Day this past September 29, and have even named their dog after the Ethiopian yirgacheffe bean.

Coffee and cocktail fans will recognize the pair from their appearances in the past three San Antonio Cocktail Conferences, where when paired with Licor 43,  they’ve produced party-fueling carajillos. They’re moving into the distribution space with new Swiss-made Eversys brewing equipment billed as the next generation of espresso machines. Though only available at Grayze currently, Pulp began offering subscription-based coffee delivery this month. A $30 box comes with “Roaster’s Choice” of two 12-ounce bags.

Or you can enjoy the coffee in person, with the newly launched coffee and tea tastings held Fridays ($25, by reservation only). Make sure to take notes.
© 2022 San Antonio Current