Heyd Fontenot, “Unnatural Urges” (Artpace)
Although it’s particularly evident on First Fridays around the Blue Star Arts Complex and Second Saturdays in Southtown The Arts District (STAD), San Antonio boasts a robust and ravenous art community that remains active through thick and thin, rain or shine. While those two monthly traditions present ideal opportunities to get familiar with the Southtown scene and its eclectic, artist-run and DIY spaces, San Antonio’s museums and longstanding institutions can be counted on nearly every day of the week, covering bases ranging from natural history and early Texana to worldly relics and contemporary art from the Alamo City and far beyond.

McNay Art Museum
Beyond the attractions one might expect from Texas’ first modern art museum — including exhibitions such as the poignant 2017 Chuck Ramirez retrospective “All This and Heaven Too,” and the 2018 offerings “Something to Say: The McNay Presents 100 Years of African American Art,” “4 Texans: The Next Chapter” and “30 Americans: Rubell Family Collection” — the McNay draws all walks and ages with a variety of special programs and maintains an open-gate policy for picnicking on the picturesque grounds surrounding Marion Koogler McNay’s former residence, a 24-room Spanish Colonial Revival mansion. Although it offers free admission every Thursday from 4-9 p.m., the McNay takes things to the next level during monthly Second Thursday celebrations combining gallery tours, live music, food trucks and cold brews in a super-relaxed atmosphere. And for the cinephiles, the museum hosts regular screenings that complement exhibitions, not to mention classic revivals, foreign flicks and art-house fare in conjunction with its excellent Get Reel Film Series. 1600 N. New Braunfels Ave., (210) 824-5368, mcnayart.org.

Artist unknown, New Spain, Sister María Antonia of the Immaculate Conception (“San Antonio 1718: Art from Viceregal Mexico”)
San Antonio Museum of Art
Partnered with the Witte under the umbrella of the San Antonio Museum Association from 1925 to 1994, the San Antonio Museum of Art came into its own back in 1981 following a multimillion-dollar renovation of its historic digs in the former Lone Star Brewery. In addition to a robust collection that covers pre-Columbian, Spanish Colonial, Egyptian, Greek, Roman, contemporary art and Latin American folk art, SAMA welcomes traveling exhibitions and collaborations (presented in partnership with Mexico’s Instituto Nacional de Antropología e Historia, “San Antonio 1718: Art from Viceregal Mexico” stands out as a Tricentennial highlight) and hosts a wide assortment of engaging programs — from weekly art talks and “Sketching in the Galleries” sessions to film screenings and monthly Art Parties presented in partnership with KRTU. Pro-tip: Take advantage of free general admission from 4-9 p.m. on Tuesdays and 10 a.m.-noon on Sundays. 200 W. Jones St., (210) 978-8100, samuseum.org.

The DoSeum
Since opening its doors back in June 2015, The DoSeum, the new incarnation of the San Antonio Children’s Museum, with its cutting-edge technology and focus on learning-through-doing, has wowed, engaged and educated visitors of all ages. Sure, it’s a wonderful place to take the kiddos — a place where they can burn as much energy exercising their brains as their feet — but it’s also a place where mom or dad can enjoy a rejuvenating lift in their own curiosity and wonder at the world we inhabit. The stunning facility, designed by local architects at Lake Flato to meet rigorous standards of sustainability and green building, features six distinct and permanent interactive centers for play/learning: The Big Outdoors, Little Town, Sensations Studio, Explore (a geography and culture exhibit), Innovation Station, Spy Academy and Imagine It! (a story creation center). Fusing elements often thought of as opposites, The DoSeum’s exhibits and programming meld cultural education with arts education and a deep STEM focus with a push for creative and critical thinking. 2800 Broadway, (210) 212-4453, thedoseum.org. 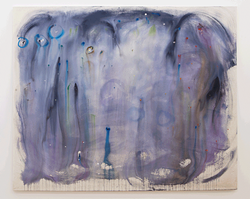 John Riepenhoff, Plein Air (Sala Diaz)
Witte Museum
With a rich history that dates back to the 1920s, the beloved Witte Museum celebrates the Lone Star State via traveling exhibitions, signature programs and permanent collections encompassing natural, regional, world and military history, anthropology and early Texas art. Growing in leaps and bounds since 2004, the museum recently unveiled a new Dinosaur Hall, a People of the Pecos Gallery, an Acequia Garden and other facilities where guests can experience Texas through three distinct windows of time — “millions of years ago … thousands of years ago … and hundreds of years ago when legendary chili queens, cattle kings, cowboys and vaqueros filled this wild and vivid land.” 3801 Broadway, (210) 357-1900, wittemuseum.org.

Artpace
Within the confines of a former Hudson automobile dealership, anything is possible, and that’s the way Linda Pace wanted it. Pace opened the doors to Artpace with the intent to nurture artists’ “freedom to dream” and engage locals with an innovative, international art world; her space was to be a playground of possibility for all parties. Even though Pace passed away in 2007, her legacy lives on through this unparalleled institution that annually hosts three trios of resident artists (one Texas-based, one national and one international) as well as varied group and solo exhibitions in the Hudson Showroom and Main Space — a street-level gallery viewable by passersby. 445 N. Main Ave., (210) 212-4900, artpace.org.

Blue Star Contemporary
Both the anchor of the Blue Star Arts Complex and a symbol of the independent spirit of San Antonio’s art scene, Blue Star Contemporary extends far beyond gallery walls via a Berlin residency and collaborations with the San Antonio Botanical Garden, Trinity University and the San Antonio International Airport. Treated to a hard-earned, half-million-dollar facelift in 2016, the pioneering space upholds its status as the genesis of First Friday festivities while always pushing forward with smart programming that puts local artists at the forefront but never ignores outsiders. 116 Blue Star, (210) 227-6960, bluestarart.org.

Galería Guadalupe
But one of the creative arms of the Guadalupe Cultural Arts Center, Galería Guadalupe upholds the Westside nonprofit’s mission to promote and preserve Latino and Chicano arts and culture via exhibitions and gallery talks. Come holiday season, Galería Guadalupe plays host to Hecho a Mano, an annual favorite that showcases handcrafted wares by an eclectic assortment of local artists. 723 S. Brazos St., (210) 271-3151, guadalupeculturalarts.org. 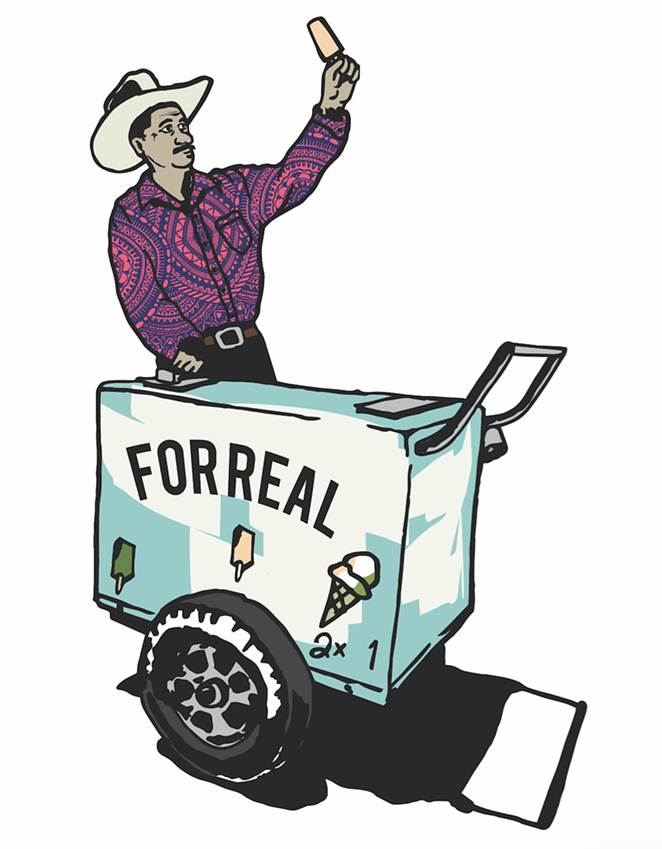 Gilbert Martinez, Ice Cream (Presa House Gallery)
Presa House Gallery
Despite an unassuming facade one could easily mistake for a private residence (built in 1910), Presa House Gallery packs a well-executed punch with monthly offerings that run the gamut from themed group shows to solo exhibitions for emerging and mid-career artists. Headed by local movers and shakers Rigoberto Luna and Jenelle Esparza, the gallery has swiftly established itself as both a spot to watch and a destination for young collectors at the forefront of San Antonio’s art scene. On First Fridays, the gallery often hosts opening receptions that look and feel like artsy parties — complete with DJs and beer. 725 S. Presa St., (210) 445-6997, facebook.com/presahouse. 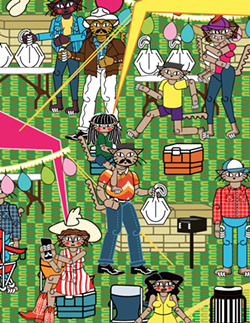 Michael Menchaca, “Vignettes of San Antonio” (Ruiz-Healy Art)
Incorporated in 2004 as a by-appointment-only outfit and opened to the public in 2013 in the heart of Olmos Park, Patricia Ruiz-Healy’s gallery represents both local and international artists while emphasizing “a Latin American, borderland, and Texas discourse.” One of three Texas members of the esteemed International Fine Print Dealers Association (IFPDA), the gallery actively participates in art fairs in Houston, Dallas, Miami and New York. Beloved for shows that combine local and foreign talent with regional themes and big-city aesthetics, Ruiz-Healy Art showcases legends and emerging artists alike and also acts as the exclusive representative of the estate of late local hero Chuck Ramirez. 201-A E. Olmos Drive, (210) 804-2219, ruizhealyart.com.

Sala Diaz
Since its 1995 launch in a quaint Southtown house, Sala Diaz has emerged as a somewhat unassuming force to be reckoned with. Founded by accomplished artist Alejandro Diaz — who now resides in New York — the gallery hosts challenging, museum-quality shows, often with an experimental bent. In keeping with its homey appearance, the gallery often overflows during openings with a convivial bunch sipping beer in the front yard or chatting on the porch. Housed in the same building and named after late San Antonio artist Chuck Ramirez, the Casa Chuck Residency is described as “an invitational program through which Sala Diaz provides critics, curators and writers a haven for varied creative pursuits.” 517 Stieren St., (972) 900-0047, saladiazart.org.

Susie Monday, Fandango (Southwest School of Art)
Southwest School of Art
Following its foundation as a nonprofit in 1965 and relocation to the historic Ursuline Convent and Academy in 1971, the Southwest Craft Center (known as the Southwest School of Art since 2010) expanded its campus by taking over a Sears Automotive Center in 1998 and rolled out an “intimate, intensive college degree program” in 2014. Now designated as the Lone Star State’s first independent art college, the SSA hosts regular exhibitions of contemporary works by regional, national and international artists (as well as faculty and students) in its museum-like John L. Santikos Building on Navarro Street as well as the quaint Ursuline Hall Gallery across the way on the historic Ursuline Campus. 300 Augusta St., (210) 224-1848, swschool.org.

Southtown The Arts District
Designed to “promote the creative culture and commerce within its community through cultural events and arts education,” Southtown The Arts District (STAD) extends beyond its namesake neighborhood to rally the creative troops in Collins Garden, King William, Lavaca, Lone Star and Roosevelt. While it maintains an active online calendar of art-centric events, STAD truly springs to life during the Second Saturday Artwalk — a long-running tradition echoing the grassroots beginnings of First Friday in and around the Blue Star Arts Complex. A consistent platform for emerging artists of all walks, the monthly happening buzzes with the energy of a block party — one that’s anchored by Andy and Yvette Benavides’ art complex at 1906 South Flores Street. A veritable labyrinth of edgy gallery spaces and studios — SMART projectspace, Gravelmouth Gallery, AP Artlab and Provenance Gallery to name a few — 1906 is a one-stop shop for Second Saturday gallery hopping in the ‘hood — which also encompasses noteworthy artist-run spaces at 1913 S. Flores (home to Freight Gallery & Studios, La Printería and Revenant Gallery) and along Lone Star Boulevard (Studio 111, Dock Space Gallery and LoneStar Studios among them). sastad.com.