On The Rocks Pub is a Bar for Tourists, Locals and River Rats Alike 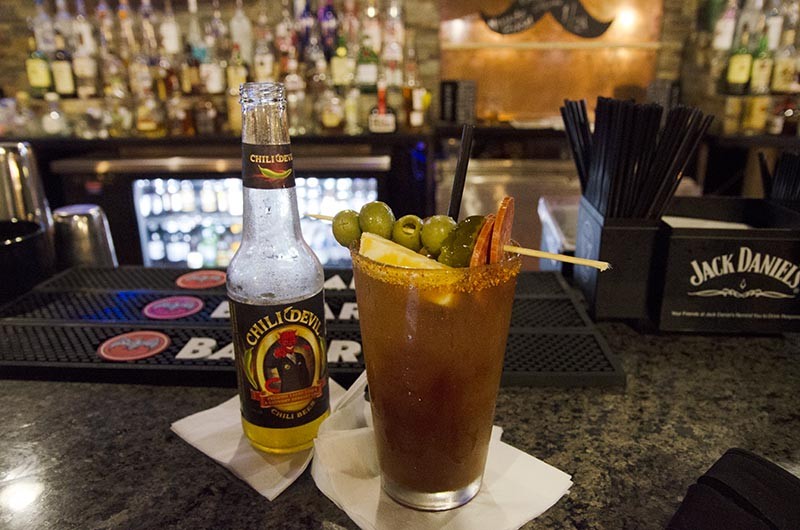 Jaime Monzon
OTR's michelada pulls out all the stops

Admittedly, a Wednesday evening might not be the best night for a bar review, and my visit happened to coincide with a dreary and wet cold front. Perhaps not my best moment, but I'm no meteorologist (and those guys only get it right half the time anyway!). But On The Rocks Pub opened about a month ago, and I needed to check out the latest bar to grace our River Walk.

Disclaimer: I think most bars adjacent to the river are awful. With the exception of a few joints that really aim to cater to both a local set and a tourist/conference crowd (think SoHo Wine & Martini Bar), most River Walk bars bum me out. Maybe I need to check into one of hotels down there, put on mom pants, toss on a fuzzy birthday tiara-and-boa combo and make it a night? But that's another story.

I was a bit apprehensive heading to On The Rocks, to say the least. For the sake of objectivity, I took one of my most party-minded co-workers with me to check out the scene. After parking downtown (grumble: there was a reason I wanted to go on Tuesday, where parking is free starting at 5 p.m. in City-owned lots), we made our way down to the basement level of the building that also houses McDonald's. Having to go downstairs added a bit of mystery — what's down there, how big is this space, who's in there? It's a technique employed by The Last Word that gives the bar-going experience a swanky New York feel.

Once inside, the former souvenir shop space uses about 4,000 square feet to house a pretty neat bar. And I do mean neat. At a month in, the bar is still holding off the grimy, sticky menace that invades other river joints. Designed by architect Benito Polendo Jr., On The Rocks features limestone elements along its walls and a rock backsplash behind the bar. Dark wood cabinetry hangs over the long marble bar top that commands the attention of the space. Come weekends, and considering the three pay systems behind the bar, I'm sure folks line the space quite nicely.

Alas, on that wet Wednesday evening, the scene steered toward the calmer side of things. A couple of industry folks came and went, while a few others tried their hand at one of the pool tables, dart board and shuffle board game available. My co-worker and I saddled up to the bar and perused the menu. But our bartender warned us he couldn't produce half of the items, as most ingredients had not yet to come in. This was probably for the best, considering my sweet tooth was immediately drawn to the saccharine creations on the menu, such as the Cream Soda with Sailor Jerry spiced rum, cola and club soda or the Butter Beer, made with Absolut vodka, Bols butterscotch schnapps, cream soda, a splash of cinnamon schnapps and topped with whipped cream. Not the cocktails of late that I'm used to, but I'll be going back to take in a Butter Beer and I might even wear my Gryffindor scarf to boot.

Instead, I made one of my best decisions of late and ordered an OTR Michelada. Our barkeep took longer than usual to deliver the goods, but it was clear why once he dropped the concoction at the bar. The michelada was a perfectly chili-rimmed pint glass, filled with a rich tomato-based sauce of "secret ingredients" that wasn't too salty and came with a Chili Devil Mexican beer on the side. On top? A small charcuterie board's worth of accoutrements, including four olives, two sweet pickle slices, three thick slices of pepperoni and a sizable Colby Jack cheese cube. I had passed on dinner, but these snacks helped tide me over.

The prices are what you'd expect out of a River Walk spot. We had just missed happy hour, held 2-7 p.m., which featured $3 Lone Stars, $3.75 Three Olives vodka, $4 wells and $5.75 cucumber shots that day. The booze lineup is all encompassing — you'll find local brews (Alamo Beer and Robert Earl Keen's Honey Ale among the selection) and the inklings of a solid whiskey and Scotch program were visible. The Buddy System, a cover duo who jammed '90s classics, began setting up toward the end of our stay, was a welcome change from the Top 40 pop that blared from the beefed-up sound system.

Opened by business partners Mike McMillen and Justin Vitek, both seasoned bar men in their own right (Vitek has spent the last dozen years managing bars around town, most recently Moses Rose's Hideout), On The Rocks Pub has potential. There's plenty in store for the recently opened joint (a mustache-shaped see-saw was unveiled this past weekend, along with a small bar food program), and it'll be interesting to see if they can stave off turning into an formulaic River Walk watering hole. I would hate for out-of-towners to be the only ones enjoying those badass micheladas.

On The Rocks Pub