A Break from Crap: Nicholas Cage Returns in 'Joe' 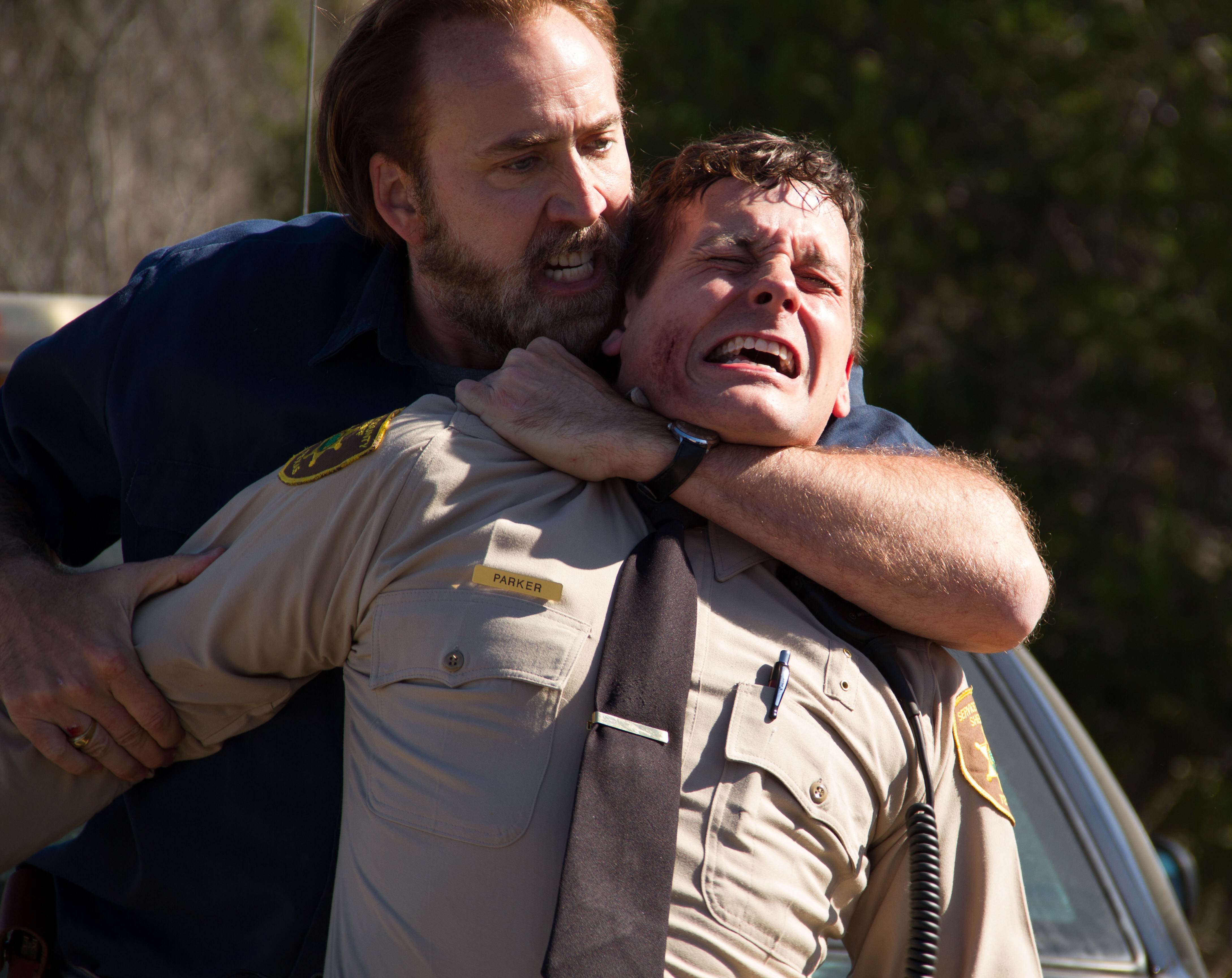 Someone should tell Joe (Nicolas Cage) that's not the way to get out of a traffic ticket.

Joe is being hailed as a return by Nicolas Cage to his indie roots. That’s not accurate. Cage never had indie roots. His real name is Coppola.

In reality, Joe is a return to non-dogshit movies for Cage. It’s the best thing he’s appeared in since roughly The Weather Man (2005), a movie with problems but certainly a better experience than Drive Angry or Ghost Rider or Neil LaBute’s remake of The Wicker Man.

Joe, like The Weather Man, is good, but not great. It’s a simple story of an ex-con—Joe, played by Cage—trying to earn an honest living, who keeps getting caught up in the kind of petty grievances that can send someone over the edge or back to prison or into the grave.

Joe works as a foreman for a landowner, removing trees from a large piece of property. One day Gary (Tye Sheridan, whom you may remember from the Matthew McConaughey vehicle Mud) wanders into the worksite and asks for a job. Joe gives him a shot, the kid does well, and the next day Gary brings his father Wade (Gary Poulter) with him, and that’s when the trouble begins.

Wade is a worthless drunk who argues with Joe and his underboss. He beats Gary and wanders the streets for days at a time trying to find liquor. The family is always five minutes from being homeless, and when Joe asks Gary why he doesn’t split, Gary reveals that he has a younger sister who needs to his protection.

Joe gets sucked into Gary’s drama because he likes the kid, and he reminds Joe a little of his younger self. But Joe has problems that existed long before Gary entered his life. First, there’s his beef with Willie-Russell (Ronnie Gene Blevins), a local bad guy who carries a shotgun. Secondly, there’s Joe’s longstanding distrust of the local sheriff’s deputies (though he seems to get along pretty well with the sheriff himself). Thirdly, there’s a German shepherd that has it in for Joe at the local brothel.

It all sounds like a lot of piddling nonsense, but in a tiny Texas town that’s been abandoned by most of its industries, petty gripes seems to fuel the local economy. If Joe’s reality is any indication, the petty gripe business is booming.

There aren’t really any surprises in Joe, but Cage, by virtue of his natural restlessness, supplies plenty of near-manic energy that keeps the tone off-kilter in a way that pushes the story along whenever it’s about to stall. The most dramatic few scenes take place about halfway through, and they involve Joe, a pitbull and the German shepherd. There’s an undercurrent of jittery dread throughout that has become Cage’s bread and butter, but when he uses it well—as he does here—it works. In fact, the few times Cage really explodes on screen, it feels as though Joe—and by extension, Cage—has earned it. These deputies would drive anyone over the edge.

The ending, which involves nearly every major character—Joe, Gary, Wade, Willie-Russell and some cops—isn’t necessarily predictable, but it is inevitable. And it’s inevitable that Cage can’t keep making good movies; that simply isn’t his track record. But McConaughey made an almost countless number of rotten movies before embarking on the redemptive road that kicked off with The Lincoln Lawyer three years ago. Of course, McConaughey followed The Lincoln Lawyer with Richard Linklater’s Bernie and William Friedkin’s Killer Joe, two good (but flawed) movies.

Cage’s next two movies are a Russian mafia thriller called Tokarev and a medium-budget adaptation of Left Behind, which, as I’m sure you remember, is a story about the Rapture. It’s possible that those two upcoming films will be good, but let’s not get ahead of ourselves. Joe may be the one bright spot in a continuing line of crap.