A Chat with Experimental Musician and Performance Artist Gary Wilson

In short, Gary Wilson is strange and sincere. A life-long musician of multiple instruments, student of John Cage, home recording prodigy and performance artist, Wilson has experienced a career almost as peculiar as his romantically charged electronic lounge jams and as unpredictable as his mock teen idol shows — performances that include throwing sacks of flour, splashing paint, duct taping a mannequin to his back or covering himself with a bed sheet and crying — all of which is just part of what he describes as "Gary Wilson Music."

You couldn't call it anything else with much conviction. Although, it's fair to say his particular brand of outsider pop music has influenced an impressive line-up of artists from the highly evident Ariel Pink to more surprising musicians like Earl Sweatshirt of rap collective Odd Future.

"One thing that I learned from meeting John Cage was that you want to stand apart from everyone else and find your identity somehow, don't try to sound like anyone else. It takes awhile because as you go on you're influenced by all kinds of things," Wilson says. "It was all teen idols, Dion, Bobby Rydell, Fabian and so on until I saw the Beatles when I was in seventh grade, met Captain Beef Heart in 11th grade. As a teenager, I was interested in the most extreme art and the most extreme music available at the time, so that works its way into my shows." 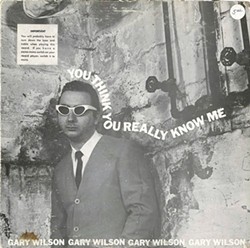 It's been 38 years since Wilson self-released his seminal album You Think You Really Know Me, a solo composition so far ahead of its time that it almost never took off. His popularity only grew over the next two decades and Wilson developed a cult following that eventually led to Motel Records hiring a private detective to find him in 2002. Wilson calls this his "resurrection." In addition to ongoing requests for re-releases of older works it gave rise to several new albums, a documentary and a European tour backed by members from the Gary Wilson tribute band, Cindy.

"Do you ever feel bummed..." I pause, realizing that's a terrible way to begin a question but Wilson finishes for me, "...that it didn't happen sooner? Believe me, I was trying to push that album, I was playing CBGB, started shopping labels in New York City, I even got a manager... labels would take the album and say, 'Oh, we really love this album. We just don't know how to market it,' and I was thinking, 'What the hell are you guys talking about? If you like it, what's the problem?' But as time goes on, you keep doing what you're doing.

"You hope for the best, I mean it took quite awhile for things to happen for me. I'm greatly appreciative that it did happen after thinking it was never going to."

But Wilson says the journey's always been exciting, even when he needed to work the night shift at a video store to get by.

"I remember duct taping my sneakers together, you know? I was hearing about Beck mentioning me the year Odelay came out, he was winning an award and I had to go into the midnight shift with my duct tape sneakers," Wilson said. "You go through that time. So it's been a real journey, and even then it took another four or five years to hit it. It caught me off guard. "

Alone with Gary Wilson is his newest album. To succeed a discography of albums following the same themes of love sick solitude, but a bit less atmospheric, it packs plenty of '70s key-toned, danceable grooves. Wilson is the only musician heard playing on the album, which was recorded in his home, but he performs with back up band The Blind Dates when playing live because, as he puts it, "What could be worse than just me coming out in front of a tape?" 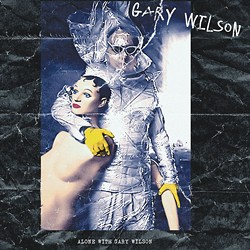 One of Wilson's most endearing qualities is his lovelorn protestation, his starry-eyed pleading with, and into, the void of heartbreak.

"My songs about ... the girls in my life are tuned to my fond and somewhat sad memories of my hometown of Endicott [New York]. Of course growing up as a young guy in a small town, my band of friends had a keen interest in girls, though many times not achievable," Wilson says. "I sing to those who never made it to first base. Never had a chance to kiss a girl, let alone fall in love, to the lonely people who are never selected for a promotion in their work, to all those who are a little different."