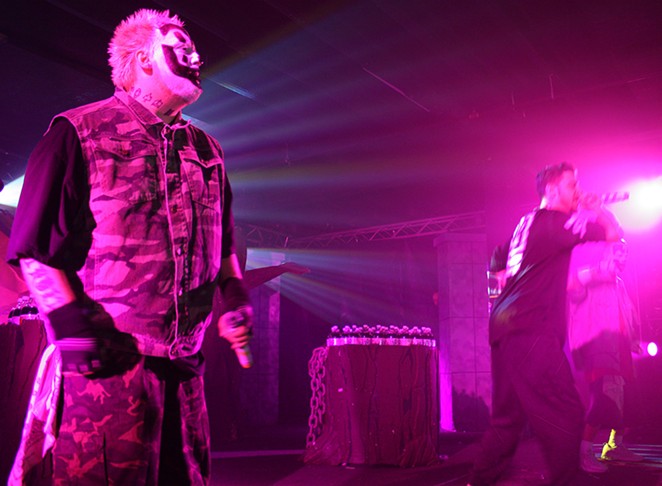 Kay Richter
"Fuckin' magnets, how do they work?" For those who only know Insane Clown Posse for "Miracles," the now internet-infamous, meme-generating music video, there's a lot more to Detroit's horrocore hip-hop group made up of Violent J and Shaggy 2 Dope.

Violent J, who resembles Food Network's Guy Fieri, even down to the frosted tips, and Shaggy 2 Dope were professional wrestlers turned rappers. Like fellow grease paint rockers Kiss, who’ve created their own empire that includes toys, movies and even their own Restaurant, ICP’s own brand called Hatchetgear- carried in every Hot Topic and Spencer’s- movies (Big Money Hustlas and Big Money Rustlas) and a Pro wrestling promotion proves that music can branch out into being a multi-million dollar industry. 14 albums in, ICP is more than music to their devoted “down with the clown” fanbase, called Juggalos and Juggalettes, so much so that they have established their own mythology called the Dark Carnival and the Gathering of the Juggalo, a multi-day festival devoted to all things in the Psychopathic Records family.

When the Insane Clown Posse came on stage, it was like the psych ward just broke loose- the energy was completely unhinged. Much like a family reunion, with Juggalos rapping along, knowing every word, cherishing every song. Joining ICP on stage were clowns closely resembling the ones from the classic '80s film Killer Klowns From Outer Space, either waving flags with the hatchet man printed on it or dousing the audience with Faygo. It was like a Faygo tsunami hit. Gallons upon gallons from liter bottles of the soft drink, ranging from every classic soda pop flavor, were sprayed at the audience, like a golden, Faygo shower consistently throughout the night. Liter bottles became giant buckets towards the end of the show, leaving everyone hot, sweet, sweaty and sticky from the Faygo bloodbath. No one was safe. Fans were clamoring for the empty Faygo bottles to take home as a souvenir in remembrance of the concert (I even scored one.)

Going into the concert, I didn’t know what to expect. Juggalos were recently labeled as a gang by the FBI for “violent activities.” I wasn’t sure if I was going to be scoffed at because I stood out from the majority of the face painted fans, decked out in their finest hatchet man jerseys, tee shirts and bling, but I wasn’t. Everyone was cool to me, and I was even complemented by numerous Juggalettes. Most Juggalos live on the fringe of mainstream society, and look toward ICP and their fellow Juggalos for a support group, somewhere they’ll fit in and aren’t judged. Becoming a Juggalo, to them, was like joining a family, a collection of likeminded people, and for once, feel like they belong to something bigger than themselves.