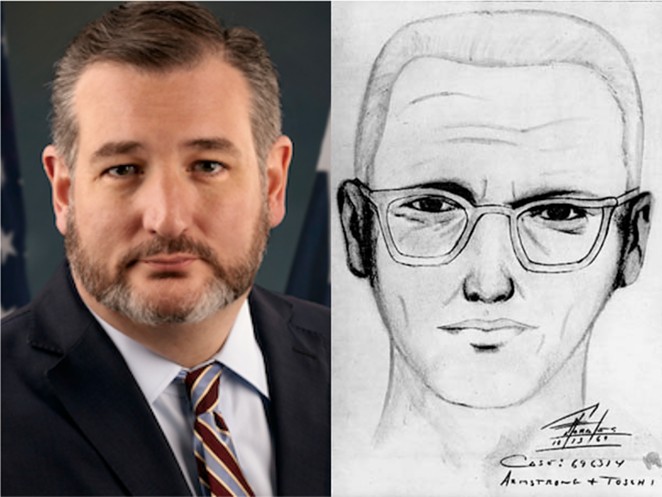 Courtesy Photo, U.S. Senate / Wikimedia Commons, San Francisco Police Department
A group says it has identified the Zodiac Killer — contrary to the popular meme, the culprit is not Ted Cruz.

Sad news for haters of U.S. Sen. Ted Cruz and lovers of wild-ass conspiracy theories: a group of former cops tells Fox News they have identified the Zodiac Killer.

Aaaaand it's not Texas' junior senator.

A widely circulated internet meme from 2015 floated the goofy-ass theory that Cruz, a Republican presidential candidate known for wince-worthy grandstanding and televised booger eating, was the Zodiac Killer.

The serial killer terrorized Northern California with a string of five brutal murders in the late '60s and early '70s. Meanwhile, Cruz was born in 1970, kinda ruling him out as a legit suspect. Hence the absurd humor of the meme.

The joke took hold, however, as National Public Radio pointed out, because so many people find Cruz "creepy," and "want to point that out, as clearly as they can."

Cruz's creep factor has only gone up since then, thanks to his effort to overturn 2020's legitimate presidential election. Just the same, the recent findings revealed by a group of 40 former law-enforcement investigators may take the wind out of the meme likening him to this one particular killer.

In the Fox story, the investigators argue that new evidence suggests Gary Francis Poste, who died 2018, is the person behind the five murders and collection of unsolvable riddles left to baffle authorities.

The team, dubbed the Case Breakers, told Fox they based the findings on forensic evidence and photographs from Poste's darkroom. One of those shows scars on Poste's forehead that match scars on a sketch of the Zodiac Killer, they maintain.

Oh, well. Cruz is still creepy as fuck, and there are still other unsolved murders out there. Keep crankin' out those memes.