A Grown-Up’s Guide to Tubing 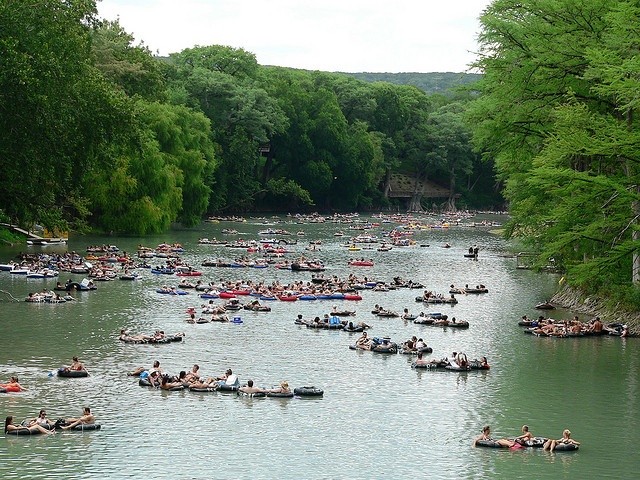 I am a late convert to tubing. I love being near water, but oddly, not usually in it. I don’t like swimming in the ocean or a lake, I’m also averse to crowds and am generally an old-fashioned “get off my lawn” curmudgeon. So for years as family and friends would enthusiastically open tubing season the Friday of Memorial Day weekend (pro tip: much less crowded), I would roll my eyes and say, “Gross. Have fun.”

Dear reader, I was so wrong. All it took was one sweltering summer afternoon on a shady bend of the Guadalupe to change me forever. We picked up tubes from a house off the highway, wandered down the lawn to a set of concrete steps, and slid in. The water was cool and clear. The current was gentle. The old tire tube smelled faintly like hot childhood summers when I played outdoors until the asphalt melted. I leaned back, letting my hair drag in the chilly water, and observed upside down the dozens of shades of juicy, vivid green layered between the water, the bank and the breeze-ruffled trees drifting by. Bliss. I’d found my proverbial Happy Place.

Obviously, this isn’t everyone’s impression of—or even desire for—a good tubing trip, but I include it as the opposite of an experience most people find dominated by binge drinking, screaming co-eds and “I’ve Got Friends in Low Places” on continuous loop. You can find a happy medium—here’s how:

DO try to go when it’s less crowded. For those of us with square (Monday through Friday, 9 to 5) jobs, I know it’s a challenge. It’s worth it to cut out of work early mid-week though, if you can. The sun will be out until 9 p.m. Friday late afternoon and Sundays are both better than Saturday. Or why not try off-season? It’s often still good tubing weather as early as April and as late as September.

DO watch the weather. A second trip to that same spot on the Guadalupe was a total bust after a drought had rendered the river completely motionless. We paddled for about 15 minutes before giving up. Better yet, choose the Comal, which is almost always flowing.

DO your research. Many of the outfitters on the major tube runs now have webcams so you can see what the conditions and crowds are like in real time. It’s also worth it to look for the tubing paradise less traveled, even if it means hauling your own tubes in and out. Legally, you can access any Texas river where a bridge crosses over a navigable stream. Just remember, you’ll need two cars, or one non-tubing driver for drop-off and pick-up.

DO drink responsibly. New Braunfels recently lifted the “can ban” allowing beer back on the Comal River. While a ban on cans did result in a slightly less littered river, it also encouraged a lot of serious hard liquor drinking. It’s hot and the trip can be as long as four hours—pace yourself with a lightweight but still fun refresher. My recommendation: ice-cold light beer, or a healthy mix like a wine spritzer or beer shandy.

Only one DON’T: Don’t be that guy (or gal). Treat the river and your fellow tubers with respect, and it can be everyone’s happy place this summer.