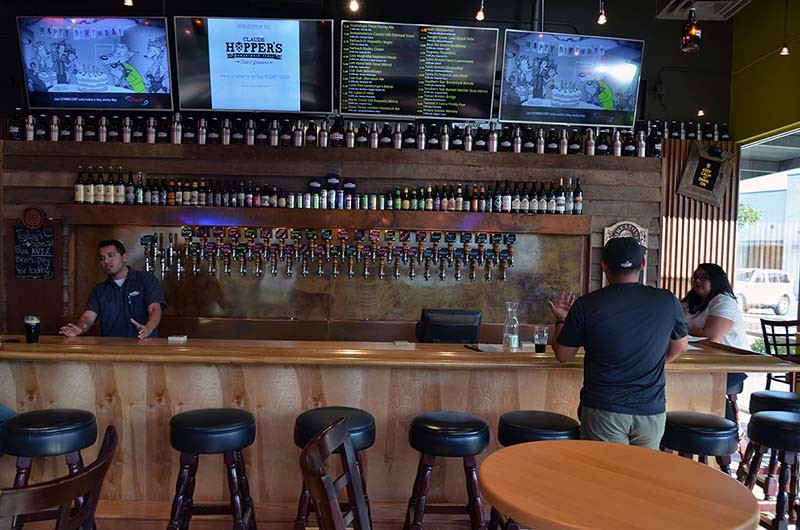 It takes a special kind of place to woo me to the Land of Loops. Needless to say, I'm rather apprehensive of heading outside of 1604, where most everything is manicured to look like it hails from some faux-Italian village, and if you happen to get stuck in traffic you might as well cancel any appointments within the next hour.

Regardless, I made my way to Blanco and Huebner to check out the latest growler station and tap room to hit San Antonio. Opened by the same folks behind The Lion & Rose, Claude Hopper's removes itself from the Brit restraints of its predecessor, landing as a rustic, casual spot that serves up craft brews from small, independent and traditional breweries. And it may be cool enough to get me out of my bubble from time to time.

We stopped in on a recent afternoon, which might be the best time to check out the taps in case you're hoping to avoid the weekend crowds Hopper's is already drawing. Tap handler Josh served up tiny samples in clear plastic cups as we pored over the extensive beer list that makes up the 48 taps. The menu is broken down into Lagers/Pilsners, Hybrid Beers, English Ales, Scottish/Irish Ales, American Ales, Porters, Stouts, IPAs, Wheat Beers, Belgian Ales and a section for Flavored Beers, which currently features Twisted X's Siesta Prickly Pear. Because Claude Hopper's is in its early days, the beer list is still transitioning to a sleek laminated menu that highlights the beer-making process, colors of beer and a timeline of American craft brewing, along with the launches of San Anto faves Blue Star, Ranger Creek, Branchline and Busted Sandal.

If it serves as any indication of Claude Hopper's legitimate beer offerings, I happened on Jesse Reyes, an active member of the San Antonio Cerveceros homebrewing group, who'd already purchased one of the joint's stainless steel growlers. For beer fans hoping to pop in and out with their week's worth of brews, Hopper's has growlers available in both stainless steel ($20 for a 32-ounce, $25 for a 64-ounce) and traditional glass varieties ($5 and $6, respectively). 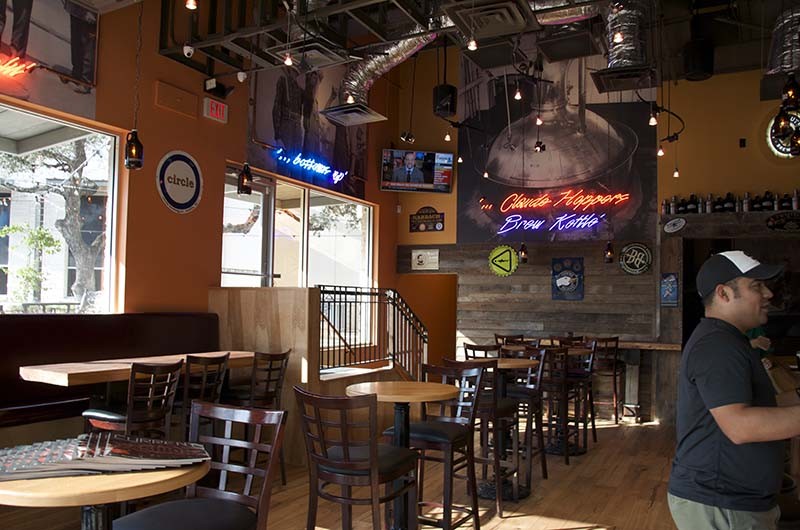 The digs are relatively cush and it's evident that beaucoup bucks were spent on outfitting the joint with comfortable seating, shiny bartops and excellent lighting (provided by growler-lamps). The patio does dip into curated Disneyland territory with a working watermill serving as the area's statement piece, but I can't say I wouldn't take advantage of the outdoor seating especially as the weather stops being hellish. It's easy to see how owner Allen Tharpe will try replicating the bar across the city as he has with The Lion & Rose and Golden Chick. Claude Hopper's is comfortable, well thought-out, decently priced and just plain fun.

Prices for pints and fills are listed on the menu as well as the flat-screens above the bar (don't worry, sports fans, there are a few more screens with ESPN talking heads as well), and most start around the $4.50 mark, with only the Clown Shoes Pecan Pie Bourbon Porter breaking the $10 mark for a pint.

Of the 48 beers on tap, five are available on nitro and 12 are on a seasonal rotation. Josh, who I'll liken in sharpness to Filling Station's former brew guy Aaron Jarvis, has already learned how to handle the dummies that go into this serious-of-a-craft place asking for Guinness or Stella. Just don't.

If you're hoping to fill your belly with something other than beer, Hopper's does have a small menu of tapas, including seasoned pretzel sticks (the Cajun ones were particularly tasty), a hummus trio, Caprese salad, chicken wings, flatbreads and street tacos. Do yourself a favor and order the scallop mac 'n' cheese during your next visit. It's hot, cheesy, dotted with fresh scallops and served in a bread bowl—no dieting here.

I might pack some snacks during my next trip to the area (it's a long drive!), but return visits to Claude Hopper's are definitely in my future. Beer fans, you've got another great option north of 1604.