A Walk Through Hotel Emma 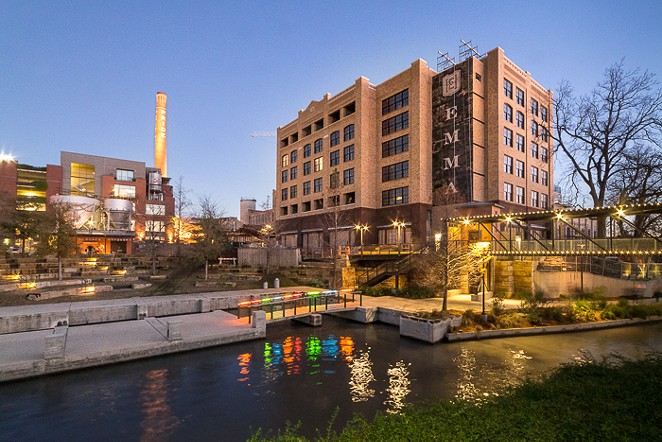 When you walk up to Hotel Emma’s reception area, through the slate-gray gravel and naturally arranged flora, you start to feel as though you’re entering a unique place with an old personality and an authentic soul. You’ll glance at the massive outdoor fireplace to your left, you’ll look up at the restored façade of the towering old brewery and you’ll realize, before you’ve even walked in, that this place was built to exceed all of your expectations. Inside the reception area, as you step onto the vibrantly colored Redondo tile, patterned after the tile in the original brewmaster’s office, you encounter a reception desk that combines old-world charm with new-world sophistication. 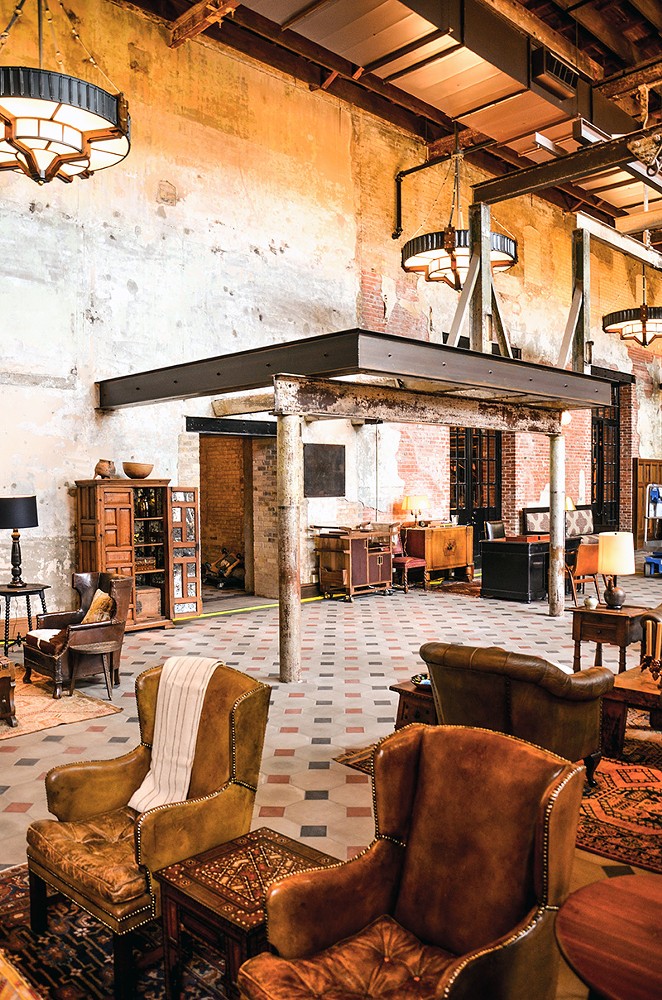 With a case showing off various industrial trinkets of interest from the building’s past life, a massive repurposed mail-sorting shelf, and beautiful round lights that bathe you in a nostalgic yellow glow — there’s a feeling of unexpected glee upon walking in. Proceeding into the main lobby and lounge area, with The Library in front of you, stacked with tales of bygone intrigue, you’re called to marvel at the simple majesty of a large, old ammonia-filtering machine, front and center. It’s a quirky centerpiece, to say the least, but it’s strangely awe-inspiring and serves to reinforce the same rich history as the rest of Emma. It all feels very South Texas — and it is — but you also can’t shake the feeling that it belongs, in scope and in value, to the whole world, as a celebration of culture and life itself. 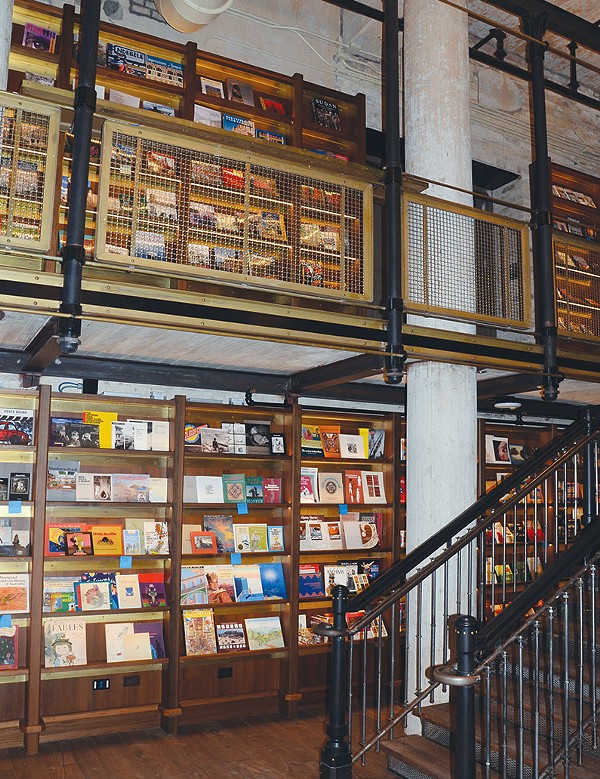 First things first: there’s a library in this hotel! And I’m not talking about some bland collection of 20-year-old travel books, cheesy romance novels and John Grisham paperbacks sitting next to a fake fireplace — this is a massive, impossibly far-flung collection of whimsical treasures of the intellectual and artistic variety. The Library, gorgeously appointed and blessed by warm light and the same rustic/refined, time-worn feeling as the rest of Emma, is actually the private collection of one Sherry Kafka Wagner. Of the 3,700-plus volumes indexed using an old-school card system, Wagner told the San Antonio Current that “so many of these books have been, for [her], the beginning of a journey.” In Wagner’s estimation, her “life really began when [she] started reading.” Something like a personal history in book form, The Library’s collection is as eclectic as the woman herself, who is a novelist, historian, Harvard Fellow, cultural anthropologist, San Antonio enthusiast and so much more. In indexing the collection, she reports that “[her] life flashed before [her] eyes.” This gem of a space, an oasis and a launching pad, invites us all to peruse Wagner’s adventures and begin new ones of our own. 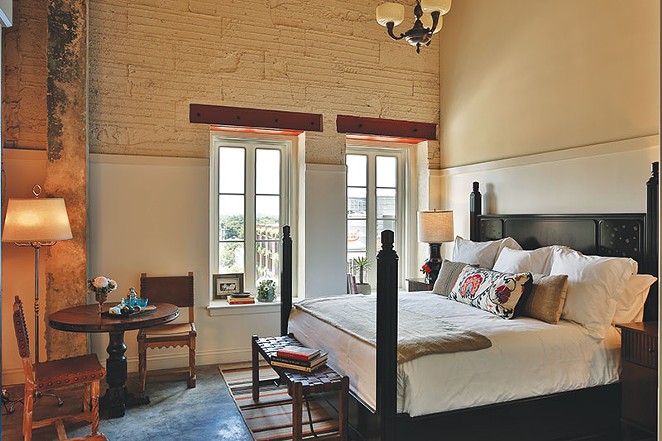 Courtesy
No two rooms are identical.

While many aspects of Hotel Emma are specifically designed in the hopes that locals will gravitate to the place on a regular basis to hang out, grocery shop, eat and drink, the unique rooms and suites, starting at around $350 a night, will no doubt be a tad more forbidding. The first thing to know about the rooms and suites, of which there are 135 and 11 respectively, is that no two are identical. This place, in general, flips a fancy middle finger to the kind of standardization that causes guests to have a “stay” rather than an “experience.” Each room shares certain elements, one of which is the minibar and fridge stocked with local goodies, but has a slightly different layout and often signature furnishings.

The suites are absolutely magical, maintaining the kind of eccentric, South Texas-industrial chic that pervades Emma. Each of them has its own personality and its own story to tell, and each boasts a different view of the city and/or the Pearl. Through twisting hallways and unpredictable corridors, all of which have a vaguely nautical vibe found elsewhere as well, guests arrive at these rooms with an uncommon sensation of mystery and seclusion. The rooms, speaking in terms of aesthetic aftertaste, maintain a feeling of wear and history, while suggesting adventure and freshness. 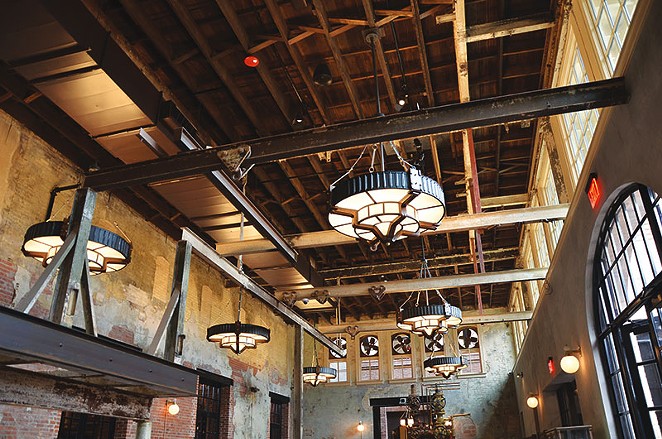 Bryan Rindfuss
The building's rich history is the design inspiration.

To say that there were no accidents in the Herculean, multi-year undertaking of decorating and designing Hotel Emma is to “deny the accident,” as Jackson Pollock once did. Led by New York design firm Roman and Williams, with huge assists from countless locals, the interior design of Emma is rooted in the history of our city and in the artifacts of the Pearl Brewery’s history.

When the old building was gutted, all of the curios and implements found were moved to a warehouse, where designers could access them for inspiration and, in so many cases, repurposing. Jill Giles, whose firm Giles-Parscale worked on many divergent aspects of the project, including branding, fixtures, layout and even the hotel’s signature fragrances (with SA’s Soular Therapy), told the Current that Emma “is built around stories and history, and all along these stories have helped us define the brand and envision the unique experience.” She struggled to even elucidate the involvement of her team over the past two years; the role has been “so massive” and the scope “so unusual.” Speaking in general terms, Giles feels as though this “once-in-a-lifetime project” benefitted from the team’s “if you build it, they will come” approach. “Rather than guess at what people want,” she explained, “why not give them something so amazing that they didn’t even know they wanted it?”