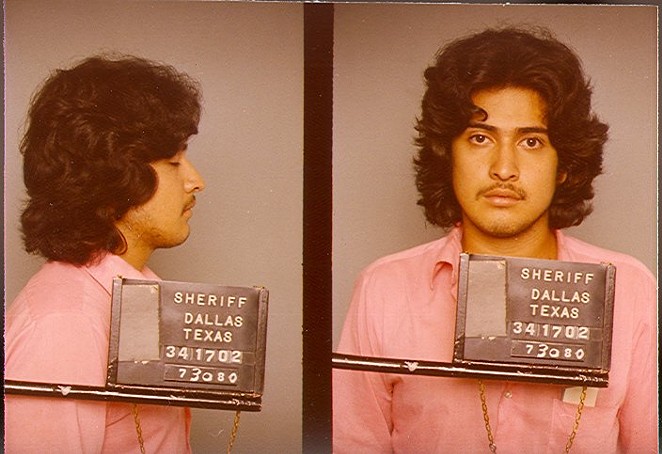 thewrongcarlos.net
Carlos DeLuna's mugshot in 1980.
After years studying errors in death penalty cases, Columbia University law professor James Liebman wondered whether he could prove someone had been executed for a crime they didn’t commit. To test the theory, Liebman turned to Texas, the epicenter of the modern death penalty. In 2004, he and a team of students stumbled upon the case of Carlos DeLuna, who was sentenced to death in 1983 for the murder of a young gas station attendant named Wanda Lopez in Corpus Christi. From the time of his trial to his execution in 1989, DeLuna professed his innocence and claimed another Carlos, Carlos Hernandez, killed Lopez. Prosecutors mocked DeLuna’s defense, calling Hernandez a “phantom” and claiming police had searched for but couldn’t find the other Carlos.

In 2012, Liebman and his team of students published a book meticulously detailing the cascade of errors that led to DeLuna’s conviction and death sentence. They documented how police barely investigated Lopez’s murder, walked on evidence, and turned the gas station over to the owner to wash it down less than two hours after the brutal stabbing. Prosecutors ignored glaring questions, such as how DeLuna, who was arrested near the gas station after the killing, could have left such a bloody crime scene without a drop on him. They built their case almost entirely around a single, unreliable eyewitness while calling Carlos Hernandez “a figment of DeLuna’s imagination” — even though Hernandez was well known to local law enforcement, had a history of violence against women, and was a suspect in other stabbings in the area.

Fair Use
The theatrical release poster for "The Phantom."

The Phantom, a documentary that opens in theaters this weekend, features the work of Liebman’s team and builds on it, presenting new interviews and evidence that further undermines DeLuna’s conviction and bolsters the disturbingly convincing case that Texas executed the wrong Carlos. The documentary comes at a time of growing unease about capital punishment in Texas and across the country.

The Observer spoke with Liebman about DeLuna’s case, the documentary, and the fallibility of the death penalty:

Can you talk about your research around the death penalty and how it led you to the case of Carlos Hernandez?

During the late 1990s, on request from Sen. Biden who was then the head of the Judiciary Committee, we conducted a study that found nearly two-thirds of all capital verdicts imposed in the United States between 1973 and the 1990s were overturned for serious error. In 1996, Congress also passed the Antiterrorism and Effective Death Penalty Act, which made it much harder for federal courts to overturn capital verdicts — even when they were totally, clearly, unequivocally flawed and filled with prejudicial errors. We knew from our study that these errors were very prevalent, which raised the concern that reviewing state courts couldn’t catch everything.

All of this raises the probability that innocent people will get executed, so in 2004, some students and I decided to see if we could test out that theory. We looked at Texas because that’s where the largest number of cases were going through the courts at the time, and that’s still the case. We also looked for single-eyewitness cases. Eyewitness testimony is already known to be very unreliable, but a case that turns entirely on identification by a single witness is on its face weak. We looked through Texas Court of Criminal Appeals opinions and the facts presented in those cases, and we discovered Mr. DeLuna pretty early on.

I had a group of expert law professors and defense counsel folks who were looking at our possible cases and I remember one of them saying, “This ‘Other Dude Named Carlos’ defense is a nonstarter,” saying that it seemed like a really dumb case. But it still piqued my interest given how bad the identification was and the seeming sincerity with which the defendant insisted that there was somebody else, that he knew who the real killer was. We were looking at a few other cases, including another one in Corpus Christi. So I asked our investigator to just spend an hour or two if he had any extra time to see if this other Carlos ever existed, and he found signs pointing to Carlos Hernandez within an hour.

There are red flags all over DeLuna’s conviction. Police botched the investigation. Prosecutors relied almost exclusively on eyewitness testimony from a white guy who admits he can’t tell Hispanic people apart. And prosecutors seem to have lied in court, calling Carlos Hernandez a “phantom” who couldn’t be found despite him being a suspect in a recent murder. What does it say that all of this occurred in such a seemingly ordinary case?

What happened with Mr. DeLuna changed my view of what the most worrisome cases are. Prior to this, everybody had thought the most worrisome case is where somebody who is a very substantial member of a community is killed and there’s a lot of pressure to find somebody. Here, this was a victim who nobody paid any attention to—not her employer, not the police. As her family’s lawyer says in the film, it seems like she was just another young Chicana to a lot of people. Everything was done poorly because it looked to everybody like a routine case. It went through the courts much faster than most cases. And this turned out to be one of those cases where, just adding up every one of those pieces where somebody should have done more, it created a real risk for miscarriage of justice.

Another confluence of factors here is both the victim and defendant were poor people of color. What does this case say about racism in the death penalty and the criminal legal system?

There’s always been a focus on the race of the defendant, which has an impact, but the race of the victim does, too. There’s a lot of evidence to show that enforcement of criminal law — whether it’s police or prosecutors—is just less focused, less competent, and less thorough in cases involving victims who are people of color, particularly victims of color who are low-income. Police and prosecutors face very little pressure to get things right in those communities.

What do you hope happens with this documentary?

The Innocence Project and other organizations, including some in Texas, have made the film a centerpiece for this petition to President Biden to follow through on his promise to end the federal death penalty. That would limit the use of the death penalty in the United States. For going on 20 years now, the states have been decreasing in their use of the death penalty, then we had this sudden surge of federal executions under the Trump administration. I think this film should solidify that at least the federal death penalty should be ended. That’s a specific action or reform that I’d point to in terms of hoping that this case and the travesty that happened here can have any sort of positive impact.

Public support for the death penalty is at historic lows and states continue to abolish it, but it seems to be getting even more extreme where it remains. States are now considering firing squads, electric chairs, and even poison that Nazis used in gas chambers as lethal injection drugs get harder to acquire. Where are we right now on capital punishment?

For the past two decades, the number of death sentences each year has diminished. At the very end of the 1990s, you were getting 300 to 350 death sentences a year nationally and now it’s less than 30, sometimes less than 20. The vast majority of counties in states that have the death penalty like Texas are not using it, or haven’t used it in a decade or two. In general, there is this decreasing need on the part of the criminal justice system nationwide to use the death penalty. Public approval has dropped from about 80% in the 1990s down to about 60% who favor it now. Sixty percent of people in favor of the death penalty is what you have in Canada, what you have in Great Britain and in Sweden [all of which have abandoned capital punishment], so we’re at a level where most other countries have found it possible to abolish the death penalty.

At the same time, you have a small set of counties that account for a large proportion of death sentences. Less than 40% of the population in the United States even lives in jurisdictions that have the death penalty, so we’re talking about an even smaller portion of that population. It’s like a lot of other things in this country: there are some very strong divides. But on this divide, there’s a very clear majority. If you look at, say, the counties that have the death penalty but have concluded that they don’t really need it in order to serve the purposes of the criminal justice system, you see this larger trend.

In the study that we did for Sen. Biden back in the 1990s, one of our findings that’s been replicated several times since then is that the jurisdictions that use the death penalty a lot have poor law enforcement records, generally meaning that they have low clearance rates for serious or violent crimes. And the other finding we had, which has also been replicated, is that those jurisdictions that use the death penalty more [frequently] have a higher probability of error in any given death case. So there seems to be this dynamic that they use the death penalty in lieu of more modern, reliable, effective law enforcement practices.

The Phantom opens in theaters and on demand July 2. This interview has been edited for length and clarity.