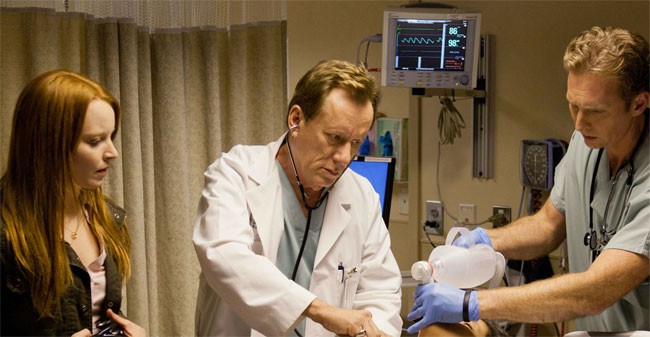 Coma (8pm Mon and Tue, A&E)
Ridley and the late Tony Scott have produced an effectively creepy update of Coma, originally a 1977 novel and 1978 film. Lauren Ambrose is plucky and smart as Susan Wheeler, a medical student at Peach Tree Memorial Hospital. Susan notices that an unusual number of Peach Tree’s patients are slipping into comas, after which they’re sent to a mysterious facility called Jefferson. Susan becomes alarmed when she sees a YouTube video purporting to “find out the truth about Jefferson.” (I told you it was an update.)

The production is blessed with aging character actors who work wonders with their sinister roles. Ellen Burstyn, shuffling with a brace on her leg, is Jefferson’s decrepit guardian. Geena Davis is a seductive psychiatrist who’s a bit too obsessed with money and power. Richard Dreyfuss and James Woods show up as other suspicious authority figures, adding to your sense of dread about Peach Tree. Also adding to it: doctors hanging themselves, employees disappearing, and strange men hissing “You’ll end up in Jefferson too!”

Thanks, Coma — now I’m scared of hospitals. Not to mention aging character actors.

Strike Back (9pm Fri, Cinemax)
Cinemax’s series can lull you into thinking it’s a serious look at Western counterterrorism efforts. Focusing on a top-secret British unit, it features fine acting, vivid locations, and nonstop intensity. The main characters, a Brit (Philip Winchester) and a Yank (Sullivan Stapleton), are nuanced, and individual scenes can feel like cinéma vérité.

But come on — this is Cinemax. Just when you start to think “this is what it’s really like to hunt down terrorists on their own turf,” Strike Back goes pulpy on you. In this week’s episode, the search for a fanatic with a nuclear trigger occasionally pauses for softcore sex. We get multiple fight scenes, all of them an excuse for square-jawed Anglos to strike heroic poses.

Hey, I’m not complaining. Strike Back has fun with the material, offering all the nudity, violence and profanity we feel like we deserve when we plunk down for premium cable.

“I do not want a firefight!” screams the commander after her men locate their fanatic.

Nail Files (8pm Sun, TV Guide Network)
I’m surprised to see this reality series back for a second season, detailing day-to-day life in Katie Cazorla’s Hollywood nail salon. Katie operates at such a heightened level that I imagined she’d be led away by emergency medical technicians — or police — after Season 1.
Katie is a bleached-blonde social climber convinced that the Painted Nail will be her ticket to fame and fortune. You wouldn’t expect too many fireworks in a nail salon, but things can get pretty interesting when the boss is mentally unbalanced. Katie laughs hysterically one minute and cries the next. Then she starts singing and talking in funny voices. Then she cusses out an employee who has fed soap to a customer. (Yes, she also tends to hire mentally unbalanced staffers.)

“This year is just coo-coo crazy!” Katie shouts into the camera.

Isn’t every year coo-coo crazy at the Painted Nail?

Married to Jonas (9pm Sun, E!)
We’re used to reality series featuring loud, obnoxious narcissists, particularly on The Kardashian Channel (aka E!). But what if E! created a reality series featuring a likable person? Someone you looked forward to seeing because she’s so pleasant, rather than so outrageous? Folks, meet Danielle, the sweetheart married to bubblegum pop star Kevin Jonas. Dani (I hope she doesn’t mind if I call her Dani) is well spoken, kindhearted, and self-deprecating. She admits to insecurity in the red-carpet world but does what she must to make Kevin happy.

Call me jealous, but I really don’t think he deserves her. Dani quietly stands up for herself whenever Kevin behaves selfishly or impolitely. Which is way too often.

Depending on how the season plays out, I might propose a new E! reality show to Dani, starring her and me: Married to Robbins. Yeah, I think that has a nice ring to it.

Gallery Girls (9pm Mon, Bravo)
You know how you’ll walk into a Manhattan gallery, and the beautiful young woman at the desk ignores you as if you’re worthless scum? And you hate yourself for being so paranoid? This new reality series proves that you aren’t paranoid after all. That beautiful young woman really does think you (and everybody else who isn’t rich and powerful) are worthless scum.

Gallery Girls burrows into the subculture of opportunists trying to get a leg up in the art world. The women are snobby and shallow, maintaining a high school level of maturity in their 20s. “Like, I’m not gonna be here if they’re, like, rude!” sneers haughty heiress Liz at one of the endless parties the gallery hangers-on throw to see and be seen.

If the gallery girls are insufferable, the gallery owners are even worse. The porcine Eli Klein gets his kicks by bossing around an endless parade of pretty interns, going so far as to make them stir his coffee.

Does it sound like I hate Gallery Girls? Actually, I love it. These people are incredibly fun to hate as they look down on the “commoners” (yes, someone really uses that term). Being able to laugh at them from the comfort of your couch feels like the revenge of the worthless scum.