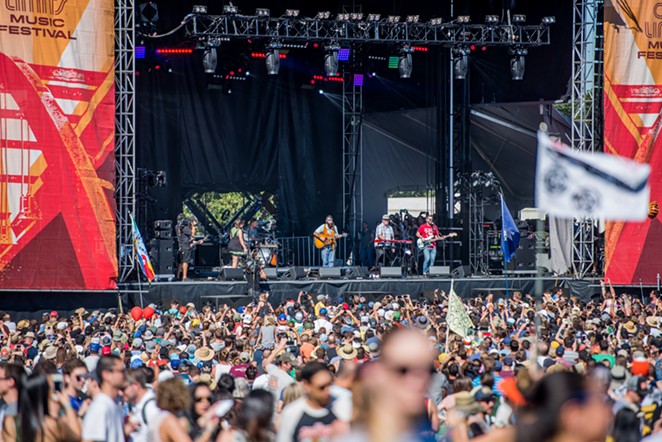 Jaime Monzon
I'm decidedly new to the music festival game. Even with Austin a hop-skip away for the past 13 years that I've been living in San Antonio, I stayed away. The reasons were plentiful. Tickets aren't necessarily cheap (and I'm a writer). Lodging could be an issue. What exactly does someone wear to this? And finally, I really didn't think I was physically fit enough to survive a three-day hike fest.

But alas, when a three-day weekend pass lands on your lap the day before the festival's first weekend, along with a spotless condo a mile away from Zilker Park, you commit to enjoying Austin City Limit Music Festival's 15th anniversary.

Here's how day one turned out:

Shoulda Read the FAQs: Because I'm essentially winging it, I came with a seasoned veteran/Current photographer and had him lead the way. I've had to remind myself not to bitch about the insane amount of walking (his FitBit registered more than 17,000 steps). I also had to toss an aerosol can of sunscreen. Not great for someone wearing an off-the-shoulders top.

The Strumbrellas: My first foray included a stop at the Miller Stage for Toronto's "folk popgrass" Strumbrellas. The sixsome acted as the perfect first act, with their jangly tunes and great rapport with the audience through most of their set (even if it did start with a mic malfunction). Their Decemberist meets Format vibe means they'll definitely land in many a Spotify playlist in no time. Jaime Monzon
Foals: As a 5-foot-3-inch shorty, being behind tall dudes is just a fact of life at this point, and it's exacerbated at festivals. My view from Foals — the Oxford-formed indie rock band that'll visit San Antonio's Aztec Theatre on October 8 — was less than great. Still, you don't need to be front and center to enjoy the most of their live show that offered songs from What Went Down, the band's 2015 effort. Don't miss them in SA. The Aztec's intimate setting will undoubtedly make for a better show. Jaime Monzon
Gina Chavez: One of my ACL spirit guides sang the praises of songbird and Austin native Chavez, whose alt-Latin seven-piece band took up most of the Tito's Vodka stage with their brass and percussion. The lively set was one of the few dance-filled crowds I was part of (who doesn't dance for M83!? More on this later), and made for serious hip shaking. Chavez's soulful voice, paired with her songs about immigration, being and unrequited love, all under the covered Tito's tent, were a welcome refuge from the sun.

Jaime Monzon
M83: After a brief stop at the festival oasis known as the press lounge (complete with Blo Bar I will be visiting later), I scampered over to the M83 show where Frenchman Anthony Gonzalez led the audience through several tracks of the band's 2016 album, Junk. As a fan of all things saxophone, I thoroughly enjoyed this set, but could have used better audience brethren. Members of the crowd directly near me failed to get the memo that this show was meant for dancing. Good effort, by Gonzalez and co. (especially raven-haired bandmate Kaela Sinclair* on the keyboard).

Jaime Monzon
Radiohead: Question: Do people love Radiohead because of their first few albums and respect later efforts because of our love for OK, Computer, or ...? I got what I wanted out of the performance, a trippy two-hour set that included a "Lotus Flower"-Thom Yorke dance, but unless you're a die-hard, long-time fan ... the crowd-to-songs-you-may-know ratio was just not in the cards for me. Or maybe I'm just loser.

*Kaela Sinclair was previously identified as Morgan Kibby; who is not touring with M83.