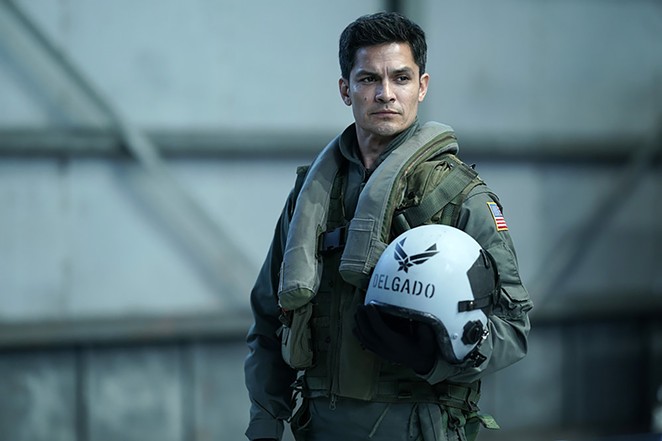 On the new NBC series La Brea, one of the characters’ key motivations is to not be eaten.

Giant sloths, saber-toothed tigers and short-faced bears are only a few of the life-threatening challenges they face in the premiere season of the fantasy drama.

The show follows a group of people in Los Angeles who are transported to a dangerous, prehistoric land after they fall into a massive sinkhole. San Antonio native Nicholas Gonzalez plays Capt. Levi Delgado, a U.S. Air Force pilot tasked to fly a specialized aircraft into the pit to rescue survivors.

During an interview with the Current, Gonzalez, 45, talked about shooting a series during the pandemic. The Central Catholic High School graduate also touched on landing a role not specifically written for a Latino actor.

New episodes of La Brea air every Tuesday at 8 p.m. Central on NBC.

What attracted you to a project like La Brea?

You can’t help but be caught up in this fantasy world. We’ve seen these sinkholes happen [in real life], and it’s scary. All these cars and buildings and sometimes people fall in. You wonder, “Where does it all lead?” This show is a wild ride about one possibility. I think the world needs an escape like that right now.

What was your experience shooting a TV show about a disaster during a real-life crisis like the pandemic?

It was pretty cathartic. It really informed a lot of what was going on. It was a really difficult shoot. We were all away from our families. We were out in the elements. But we all came together as a cast and got to know each other very well. I can genuinely say that I love every one of these people.

One of those people is actor Jon Seda, who I’m sure you’ve run into in this industry before.

It’s funny because we’ve always been up for the same roles, so you’re never going to see us both in the same project. Here, we’re working together. He could not be a more amazing person. We all probably agree that he has been the saint of the show.

If you were a producer listening to the elevator pitch for La Brea, would you be sold or would you think it was too over the top?

(Movie trailer voice) In a world where a family is torn apart … (Normal voice) I think the show is about what happens when everything is taken away and people must learn how to survive. Then, there’s everyone else [like my character] who has the technology and must try to bridge this unbridgeable gap. What do we do? We send in Levi Delgado. There is so much more mystery on top of that. The show refuses to be defined.

Your character’s name was originally Levi Brooks. I’m assuming the role wasn’t written specifically for a Latino actor and that your casting was the catalyst for the name change, yes?

Yes, he was originally Levi Brooks but what often happens is that they have an idea going in about who this character is going to be, and sometimes that idea gets shattered. There are a lot of examples [in this industry] of whitewashing, but this is an example of that not happening. I’m proud that he’s now Levi Delgado. I’m proud that that’s another aspect of him that we get to show.

Is it also safe to assume that 20 years ago, a Latino actor wouldn’t have been called in to audition for a character named Levi Brooks?

Yes, I was often told, “They’re going white with that role.” Then, me and an African American actor and an Asian actor would have to fight for this one role that they’d leave open [for a minority character]. With the advent of diversity, we’re all pushing for representation. It’s about people and singular experiences. While we love being universal as humans, I think we realize that the more specific a story gets, the more universal they become.

Since this show is about a natural disaster, can you tell me about the first time you experienced an earthquake in Los Angeles?

It was around 2001. I was in bed, and I thought my dog jumped on it and made it shake. Then, I remembered my dog was back in San Antonio. [Earthquakes] never bothered me before. They’re just something you get being in California. But I’m a dad now, so I think about what I put in [my daughter’s] room. I don’t put anything over the bed that could fall.

How do you think Levi would do in a dogfight with Maverick from Top Gun?

Well, Tom [Cruise] is a little bit older now, and Levi is the best of the best. He’s a test pilot, so he’s seen planes that Maverick hasn’t even dreamed of before. So, I don’t even think it would be a battle.