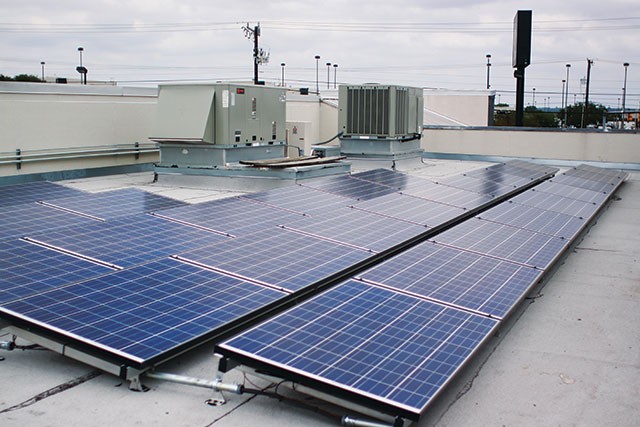 Last Thursday, CPS Energy CEO Doyle Beneby threw water on a controversy that burned for nearly a month, delaying a program that would slash how much the public utility reimburses rooftop solar customers for the power their systems produce. While CPS and the local solar industry have at least a year to strike a compromise, critics say there’s lingering concern over how CPS arrived at its proposal, how quickly CPS brass planned on rolling it out, and how the San Antonio utility’s behavior clashed with actions taken by other municipally-owned utilities.

CPS’ abrupt decision to change how rooftop solar customers are compensated for energy they produce panicked local installers last month. CPS insisted that net metering, a scheme in which every kilowatt-hour a rooftop system produces offsets a kilowatt-hour the customer consumes from CPS, threatened to upend the utility’s current model. As ratepayers choose rooftop solar, those fixed costs to maintain power plants, power lines, transformers and meters (so-called “fixed assets”) get pushed onto a smaller pool of non-solar customers, CPS contended. So, to make it “fair to all ratepayers,” and to recover those costs, on April 9 CPS announced it was cutting that reimbursement rate to 5.6 cents per kilowatt-hour, a 44 percent decrease that solar installers claimed would kill the local industry, making rooftop solar systems impossible to sell to residential customers.

The uproar from local solar installers and advocates prodded CPS to backtrack more than once. At first, the utility said solar customers could keep net metering for a decade before being switched to its new rate under its so-called SunCredit system. Then CPS agreed to grandfather those customers for the life of their systems. The April 26 deadline, inconveniently in the middle of Fiesta, was bumped back to May 31.

Still, local installers balked at being given a little less than two months to figure out how to adapt to a new business model.

“I can’t sell a system on 5.6 cents,” an exasperated Billy Hill, owner of Hill Electric, told the Current earlier this month. “CPS is saying their SunCredit will eventually go up in a few years. Well, it kills our industry today. No one will invest in a system that, by today’s rate, takes 20 years to pay off.”

On May 1, installers like Hill flooded City Hall, pleading with Council members to tell CPS to back off. Then came a contentious public meeting between installers, their rooftop solar customers, and CPS reps on May 3. Though CPS attempted to ease their concerns, none left the table happy. CPS spokesperson Lisa Lewis insisted it wasn’t all doom and gloom for installers, given that the utility had been flooded with proposals from customers trying to get in on the net-metering game before the rate change.

Solar San Antonio director Lanny Sinkin had a different take. Customers who had already committed and had investments lined up were rushing in, for sure. But major long-term projects were backing out in droves, Sinkin insisted. “We’ve surveyed 19 companies, with a total of 422 employees here in San Antonio,” he said. “We saw 74 projects canceled or suspended, at a value of $17.7 million.”

Last week, after meeting with Sinkin, Beneby offered to axe the SunCredit proposal, giving CPS and local installers at least a year to hash things out.

CPS isn’t the first utility to attempt to move away from net metering, said Adam Browning with the California-based advocacy group Vote Solar. In fact, “We’ve seen an onslaught of measures to weaken or completely dismantle how rooftop solar customers are compensated,” he said. While net-metering isn’t always ideal, he said, “it’s been the convenient mechanism to provide fair value for the (power) generation rooftop systems provide,” he said. “It’s still just rough justice.”

So imagine Vote Solar’s surprise when the latest attack on net-metering came from CPS, which the group named 2012’s “Utility Solar Champion” ­– “It was not at all what we expected,” Browning said.

One of the biggest open questions was how CPS came to its reimbursement rate, particularly considering the radically different approach taken by our neighbor to the north.

Austin Energy, the city’s municipally-owned utility, in 2006 began mulling over how to affix a fair price to distributed solar energy, said Karl Rabago, an energy consultant and former head of distributed energy services for Austin Energy, which he helped guide through implementing its own “Value of Solar Tariff.”

First, instead of a matter of weeks, Austin spent years considering solar’s value before switching from net metering to a tariff.

Like San Antonio, Austin has a rebate program, an incentive that helps offset the cost of rooftop solar systems – that “robust” cash-per-watt incentive in San Antonio can pay for as much as a third of the cost of such systems, CPS says.

“But we didn’t want to do rebates forever, and it became clear that our traditional support of net metering was not going to work,” Rabago said. Why? Because, according to Rabago, net metering undervalued rooftop solar, especially when you consider all these factors: avoided fuel costs, avoided capital costs of building new power plants, avoided transmission and distribution expenses, line-loss savings, environmental benefits, and the value solar presents as a fuel price hedge.

Last fall, Austin Energy became the first utility in the U.S. to offer such a tariff, with a reimbursement rate of 12.8 cents per kilowatt-hour. Instead of looking at energy prices year-by-year, which CPS proposed doing, Austin Energy “levelized” its rate over 30 years ­­– the life expectancy of a rooftop solar system – to keep the tariff stable and to shield rooftop solar customers from wild fluctuations in the market. Austin’s 30-year levelized rate is updated annually to keep it pegged to the current energy market.

So why the difference in approach? Rabago says that in Austin, instead of just simply looking for a way to pay for so-called “stranded costs,” the tariff was viewed as a way to make distributed solar a sustainable market.

“We were trying to build a solar ecosystem,” Rabago said. “We were in it for the long haul, so we viewed this as a way to get the industry off subsidies,” or front-end rebates.

While installers decried that CPS’ SunCredit proposal would reduce local demand by millions of dollars, Austin’s tariff sparked a much different reaction, Rabago said. In Austin, the new tariff spiked demand so high the utility dropped its rebate from $2.50 per watt down to $2.00 with little effect.

“The engine kept on chugging and accelerated, so much so that they reduced the rebate again” last week, down to $1.50 per watt. Austin’s value of solar compensation is working so well, Rabago speculated, there will probably be further rebate reductions in the near future.

“If you don’t have fair compensation, the industry will become overly dependent on those rebates … which nobody wants,” he said.

With CPS’ SunCredit proposal, “The behavior indicates they (CPS) view things much differently than we did,” Rabago said. “Being gracious, I’d say they’re showing a traditional utility view at best,” one primarily focused on keeping risk low and power production centralized.

Governance structure could guide that difference in approach, said ­Browning with Vote Solar. Unlike in San Antonio, Austin’s City Council acts as the regulatory backstop to all the utility’s decisions. The city’s Public Utility Commission, which makes recommendations to its City Council, holds little decision-making authority.

That is, at least for now. Austin leaders in recent months have considering changing to the CPS model – an independent board of trustees with sweeping power over the utility’s actions.

“We feel that structure is the source of a lot of problems,” said Karen Hadden with the Austin-based clean energy nonprofit SEED Coalition. In recent weeks, as Austin’s City Council debated whether or not to jump into CPS-style governance (the issue was tabled last week for further discussion) Hadden and others pointed south to CPS’ SunCredit debacle as a warning.

“These are the kind of abrupt decisions that get made when the utility’s leadership can do whatever it wants,” Hadden said. “When you go to a board, they don’t care what you think. You don’t vote for them, they’re appointed. When you can vote for somebody or boot them out of office, you can keep their attention.”

In announcing its decision to delay its SunCredit program, CPS said it plans to have quarterly meetings with local solar stakeholders to tackle the many issues that surfaced during the SunCredit controversy.

“Now the real work begins of choosing a group, setting an agenda, and conducting productive discussions,” Sinkin said in a prepared statement.

“What we’re playing with here is the opportunity for San Antonio to be a leader,” Rabago said. If San Antonio eventually trades net metering for a rate that depresses the local market, “I keep saying installers in Austin will sleep well at night, because in Austin, there will be a stable market, and a strong ecosystem, and there will be jobs every now and again in San Antonio.”

Rabago continued, “San Antonio has the opportunity to create a healthy ecosystem of rooftop solar. That’s what’s at risk with this type of behavior coming from CPS.”