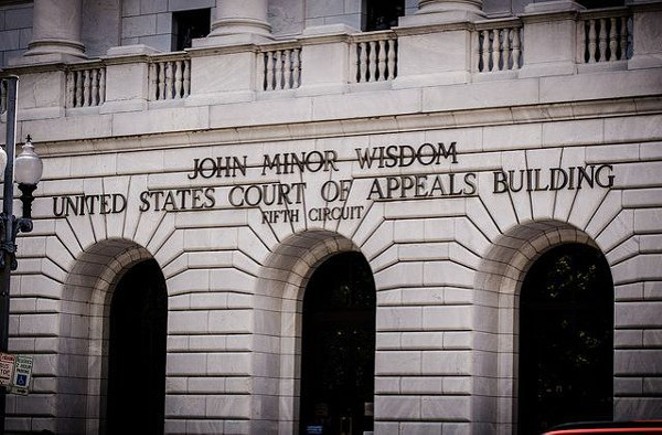 thepipe26/Flickr
The U.S. Fifth Circuit Court of Appeal in New Orleans, LA.
After judges with the New Orleans-based Fifth Circuit Court of Appeals threw tough questions at state lawyers and attorneys representing abortion providers Wednesday in the second legal challenge to House Bill 2, the fate of women's health care and abortion access in Texas remains in limbo and likely bound for the Supreme Court of the United States.

Attorneys appeared before the federal appeals court for the second time in this case, which challenges two of four provisions of Texas' omnibus abortion bill passed in 2013 after an hours-long filibuster by then State Sen. Wendy Davis.

At issue during Wednesday's hearing was the law's requirement that abortion clinics implement standards equal to those required of ambulatory surgical centers, as well as the requirement that physicians performing abortions obtain admitting privileges at local hospitals, as it applies to clinics in El Paso and McAllen. The provisions were found to be unconstitutional by federal district Judge Lee Yeakel last August. Combined, the restrictions have led to the loss of more than half of the state's abortion clinics, leaving no provider west of San Antonio, and the remaining Whole Woman's Health clinic in McAllen is open for now, but should the law take full effect, it and several others will be forced to close.

Whole Woman's Health is the only abortion clinic in San Antonio that operates an ambulatory surgical center, with Planned Parenthood scheduled to open its own this month.

During Wednesday's 90-minute hearing, President George W. Bush-appointee Judge Catharina Haynes, who already ruled to uphold the admitting privileges requirement of the law last year during the first lawsuit against HB 2, didn't hold back when questioning lawyers on both sides. She opened the hearing by asking state attorney Jonathan Mitchell about the construction requirements, such as large operating rooms, imposed on abortion clinics under the ambulatory surgical center requirement.

"What about that improves the standard of care?" she asked. "I still haven’t understood why 7,000 square feet is any more or less sterile than 3,000 square feet."

Mitchell, who replied that such requirements ensure "a sterile operating environment," was hit with another pointed question by the judge, this time regarding the necessity of such regulations. Acknowledging that medical groups have deemed such requirements as being unnecessary, he argued that others disagree and the state has the right to resolve the discrepancy.

"You kind of find an expert to say anything," Haynes pointed out. "Are we saying that if you can find someone in the world to say that we need marble floors in an abortion clinic, then that would be good enough to allow the Texas Legislature to pass that?"

Haynes also acknowledged that requiring women to travel hundreds of miles for an abortion could present risks.

"It seems like we’re going to have women driving a long way and suddenly have a bleeding episode in truly the middle of nowhere," she asked Mitchell. "In West Texas you can go miles without there being a gas station ... how does this protect that woman?"

"Wouldn’t you agree that the district court’s order is over-broad?" she asked.

Throughout the hearing, and particularly when questioning Toti, Haynes and Judge Jennifer Elrod, another Bush appointee who ruled to uphold the law, zeroed in on the numbers and whether they meet the "undue burden" standard: How many women will feel the impact of the law? How many will have to travel for their procedures, and does the number of miles matter? Data presented by Ibis Reproductive Health during the August trial show that nearly 1 million women will live more than 150 miles from an abortion facility should the law take full effect, forcing them to travel anywhere from 250 to 500 miles roundtrip for their procedures.

In addressing the capacity question, Toti told the judges that should all but eight clinics remain operational in Texas, they won't be able to absorb the need. She argued that the remaining ambulatory surgical centers would have to increase capacity by 400 percent.

The judges and lawyers spent some deciphering the situation in El Paso, where the last abortion clinic closed last April after the physician was denied admitting privileges at a local hospital. The state argued that women would simply be able to drive to a clinic in New Mexico, which does not enforce ASC or admitting privileges requirements. The judges questioned how the state could, on one hand, argue that such requirements were necessary for the health and safety of women, while on the other hand advocate for sending Texas women across the border to a state that doesn't uphold the same standards.

"I find that a difficult thing to address," Haynes said.

Supporters and opponents both seemed to come away feeling optimistic about the hearing. After the hearing, Toti told MSNBC that plaintiffs are prepared to take the case to Supreme Court should the Fifth Circuit rule against them.

“We are prepared to litigate this all the way to the Supreme Court if necessary,” she said.

The high court has already stepped in once, ruling in favor of the plaintiffs' request to block the law from taking full effect pending an appeal. The Fifth Circuit originally ruled to allow full enforcement in October, a decision that left Texas with fewer than eight abortion clinics overnight. The Supreme Court's decision meant the closed clinics could reopen, though not all did.

A decision from the Fifth Circuit may come in the next few weeks. You can listen to the full audio recording of the oral arguments here.