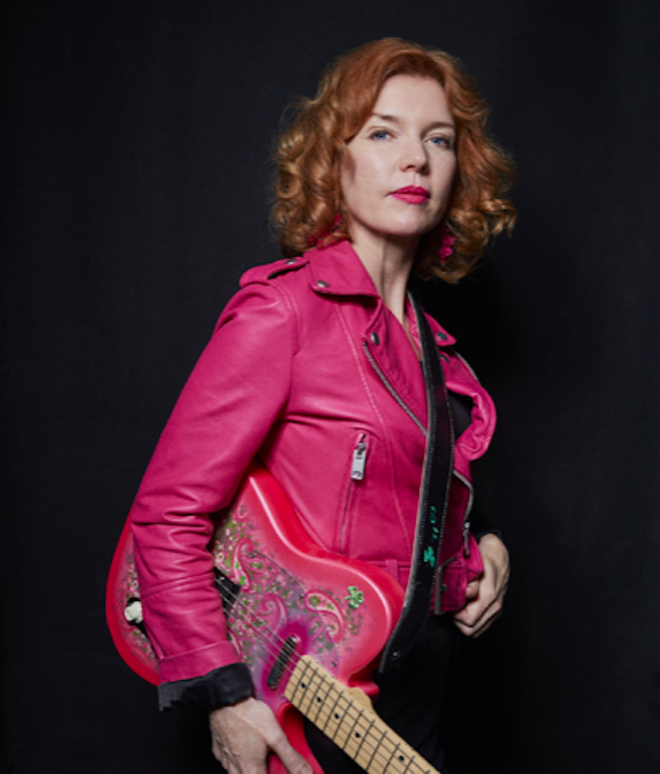 Over the course of 15 or so albums, Canada-born Foley established herself as one of the genre's most powerful performers, relying less on showy guitar theatrics than a stinging tone and lyrical phrasing. Her latest album, 2021's Pinky's Blues — named after her trademark guitar — has both of those in abundance.

Touring behind the new release, Foley will perform Saturday, Nov. 13, at Sam's Burger Joint. We caught up with her by phone to discuss Pinky's Blues, the influences on her timeless-sounding tunes and the Guitar Woman music history project, a long-running series of interviews she's conducted with the world's leading women guitarists.

My understanding is you recorded the new album with no overdubs and over a three day time period. It's got a sparse, immediate sound — also a really big sound. I'm guessing that's not the usual modus operandi for how you work.

No, it's not the usual modus. ... I mean, it's the way, let's say, blues and jazz records used to be recorded all the time, and early R&B records or whatever, when everybody was in one room. When we say we recorded live, we mean live off the floor and that we're all playing in real time, at the same time, and there's no overdubs. It doesn't get done anymore. It's very unusual.

What made you decide to take that approach this go round?

Well, Mike Flanigin, who produced the album, we'd just done his album, West Texas Blues, like that, and we really enjoyed the process of doing it all in one room live. And I think when you listen to my album and you're hearing those big sounds, it's because of the recording process and how everything is bleeding into one another. The vocals are going into the drum mics and the drums are going into vocal mics, and so it creates this big cacophony of sound and it is just a certain way to approach it.

But the thing is, is you got to have players that can actually play in real time and get performances down. And that takes a certain amount of skill too. Chris Layton on drums, our bass player, John, we're all really used to playing live and doing things like that.

I was about to say, you certainly got an all-star cast on that record. Is that the group that's going to be playing with you in San Antonio?

In San Antonio, it will be John Penner on bass — same bass player, different drummer. Chris "Whipper" Layton, of course, he generally plays with Kenny Wayne Shepherd now, so he's on the road. Our drummer will be Corey Keller, who is also really skilled. He comes from the same school of the blues at Antone's that we came from, so it's a great band. We've been out getting road ready.

When you say school of the blues, I like that you differentiate. When I hear your playing, it seems to me you're going for a more timeless approach, while a lot of other folks try to adapt the genre to what's popular at the time, or turn it into something closer to rock 'n' roll guitar heroics. Talk about your decision to stick with a more tradition-minded approach.

That's just what I love, and it's the stuff I've been loving my whole career. I still listen to a lot of the same albums I listened to in my teens. I guess I formed a bond with that style of music, and I never really veered too far off the path. And I think, in order to play blues and if you want to be a traditional blues artist, you have to commit to it, to really sound right. You've got to be that.

You can dip your toe in the blues, but you can't be a blues player unless you're really married to it. And so, I just love that stuff. I still love really old-timey stuff. I have no idea about modern music. My son teaches me some stuff. I learn a bit by listening, but I really have no interest in it. I like what I like.

Those albums that you keep going back to, what are they?

For instance, anything out of Chess Records from the 1950s, from Muddy Waters to Jimmy Rogers to Little Walter. I mean, that stuff is like 101 when you're a blues guitar player — to learn the style and the form. I do some instruction now, so I've got really re-familiarized with a lot of that stuff. But it stays with me. A lot of the traditional Texas blues of, let's say Lightnin' Hopkins, T-Bone Walker, Clarence "Gatemouth" Brown, I mean, I always refer back to that. And I get to play a lot or hang out with Jimmy Vaughan a lot. And he's also very traditional and is always revisiting that stuff. But it's a pretty broad base of records.

If you go to a Chess Records box, you can't go wrong with that.

Your Guitar Woman project is something that's been going, off and on, for about 20 years now. What's its current status?

The status is that I am working with an editor on the book and I'm also doing my dissertation, my PhD dissertation, sort of based around that research. So it's a pretty big project, and the book is still ... I did over 100 interviews, and then I've been sculpting it into some kind of book. That's taken me a couple of decades, but I have an editor now and she thinks we're closer than I've ever been. So I'm hoping that in a year, I could have the book out.

When you're doing qualitative research like that, you start looking for these threads that connect all the people you interview. What are the themes you've seen running through all these interviews with women guitarists?

There was so much diversity in that project that that question alone really got me, because I was looking for that. That was why I started. I was like, "Well, there must be something that ties us all together, besides just this instrument. Something of the character of this person." And I think really it's a unique quality of character. Maybe somebody that's a bit more of a risk taker and a bit more of a unique individual.

But in general, I think people who go into vocations that are left of center or just not as popularized — or expected — have something in their character that makes them get the courage to do that. I don't know if that makes sense, but that's been a bear to wrestle that question alone, just to find that, because it's really quite a diverse group.

In between all the recording and touring you do, you completed a graduate degree in gender studies, and now you're working on a PhD. How do you juggle a busy musical career with academia?

I don't know exactly. Well, the one thing is that the academia's been all online so. I did all my coursework, so I'm just ... When you're in your dissertation, it's just your research project, and now all of it can be done remote, which really helps me. And I'm actually, just on the heels of this interview, I've got a meeting with one of my professors. I keep up with it. I don't know how, I just manage. But I do feel little scattered sometimes, like a little pulled in different directions.

When you finish, are you going to start putting PhD after your name on your posters and albums?

No. No. The only reason I did is because they let me, and I was like, "Oh, they let me in. Wow. Maybe I'll do this then." And I had some time and I love research, and I guess my woman guitar player project sort of showed me that, that I actually do have a passion for research and thinking about all this stuff. But yeah, I'm not into the hierarchy of all that. I just thought, being a blues musician on the road, I mean, I'm 53 now and I got a lot of energy, but in 10 years I may not want to be touring as much. So, maybe I can share my knowledge with people.

What advice do you tend to give young players?

Well, hmm, in general, what I always have told, or I have told students in the past is just love the work, because it's just nothing but work. If you love that, you're going to be fine. I mean, I still practice every day, as much as I can, especially if I'm not gigging regularly, I'm always practicing. I mean, I've been playing guitar for 43 years and I'm still practicing. I go to Jimmy Vaughn's house, he still practices like six hours a day. That's Jimmy Vaughn.