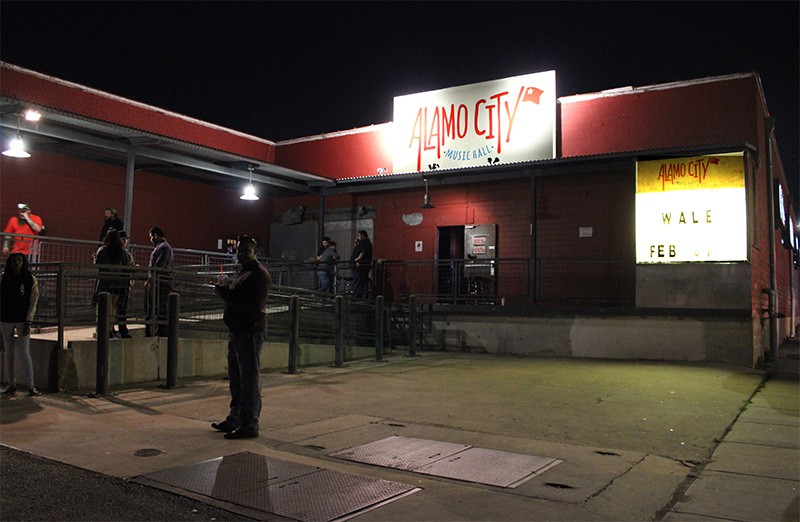 In the past few months, there's been some confusion about a large brick venue on East Houston. Known since 2010 as Backstage Live, owner Sylvia Fernandez changed the name in December to Alamo City Music Hall. But the rebranding process seemed muddled, leaving consumers and the Current a little perplexed at the marquee swap.

If a transition took place, you can't tell online. The venue maintains two websites, one for Backstage Live and one under the new brand. Fresh content is posted on each site and mirrored on dueling social media pages.

It seems to be fairly logical, Rebranding 101: Stick to a single, coherent name, issue and message. Make it easy for fans, don't confuse them when they show up to Alamo City Music Hall when they bought tickets through Backstage Live.

Fernandez said she's got a good reason for the dual web strategy. "We have so many people that go to the Backstage Live page that it's hard to shut it down," she said. "We're trying to transition them together."

In operation for four years, the Backstage Live page garnered 15,000 Facebook likes, over 14,000 more followers than the Alamo City destination. With an audience of that size, it'd be hard to shut it down right away. To help ease the transition, a (linkless) picture of Alamo City Music Hall's seafoam decal now appears at the top of each page on the Backstage Live site.

Unfortunately, the online fumbles carry over to the brick-and-mortar version of the business on East Houston. Driving in from downtown, the Backstage Live sign on the building has been painted over in the slapdash way of a child whiting out a homework error. The signs for parking still boast the former name. And the Alamo City Music Club, the former Tequila Rock Bar, is currently inactive.

"We're working on getting it open five days a week and having local music or DJs in there," said Fernandez, of the smaller venue. Like its larger sibling, the Alamo City Music Hall's online home still claims the agave-inspired URL.

So if they're going through the motions of rebranding, why do it at all? The answer concerns another prominent venue, a promoter from Austin and a new vision of the concert business in SA.

Over the phone, in the proud language of a young company owner, Scoremore founder Sascha Stone explains his end of the transition.

"We sat down with [Sylvia Fernandez] and gave her our perspective. We said, 'these are the things we see wrong with the venue, from what we see as consumer concerns,'" Stone said. "She was really open-minded and didn't take anything personally. We felt like it needed a new name, new sound, new colors, a new brand."

As a business, there are far worse consultants to have in your ear than Scoremore Shows. Profiled by the New York Times, Stone began booking shows as a college student at UT Austin in 2009. Six years later, Scoremore is a national force with the sobriquet of "Your Favorite Rapper's Favorite Promoter."

From this collaboration, the Alamo City Music brand was born.

As for the branding, the venue can hardly be blamed for the lukewarm effort on the venue's exterior. "There's not a lot of changes we can do to the outside because it is a historical building," says Fernandez.

Built in 1909 as the pre-refrigerator Merchant's Ice and Cold Storage, the site is listed on the National Register of Historic Places.

Inside, Alamo City Music Hall is a low-key music venue through and through. Offering six beers, from Lone Star at $4 to Fireman's #4 at $6, the attention is meant towards the stage.

With a punk simplicity, the liquor ranges from $4 Good Stuff, to $5 Better Stuff to $7 Best Stuff. Whatever stuff you're looking for, make sure to bring a wallet full of bills. The bar is cash only and the ATMs charge a mind-boggling $4.50 service tax.

From the massive, ornament-less room to the speedy cash bar to the trough-style men's urinals, the venue creates a sense of mass, uncatered entertainment. In fact, standing in the massive showroom helps explain the convoluted rebranding effort. With a capacity of 1,200, there aren't any competing venues of its size since the White Rabbit went into hibernation.

Larger than a bar, but smaller than a stadium, there's currently no competition for the venue, so there was no need to throw away a pile of marketing money on the name change. And that's A-Okay. A dimly lit former ice storage building shouldn't pretend to be anything but. As a transitional perk, the all-ages Alamo City Music Hall picked up a decent set of house speakers.

Meanwhile, Scoremore Shows plans to use the East Houston spot as the launching point for a larger Alamo City Music product.

"It's Alamo City Music Hall, but right now we're working on other projects for the city of San Antonio that will be in alignment with that Alamo City Music brand," says Stone. "People in San Antonio are too accustomed to making that hour-and-a-half drive to Austin. There's more than enough demand and resources to bring the experience right to their backyard."