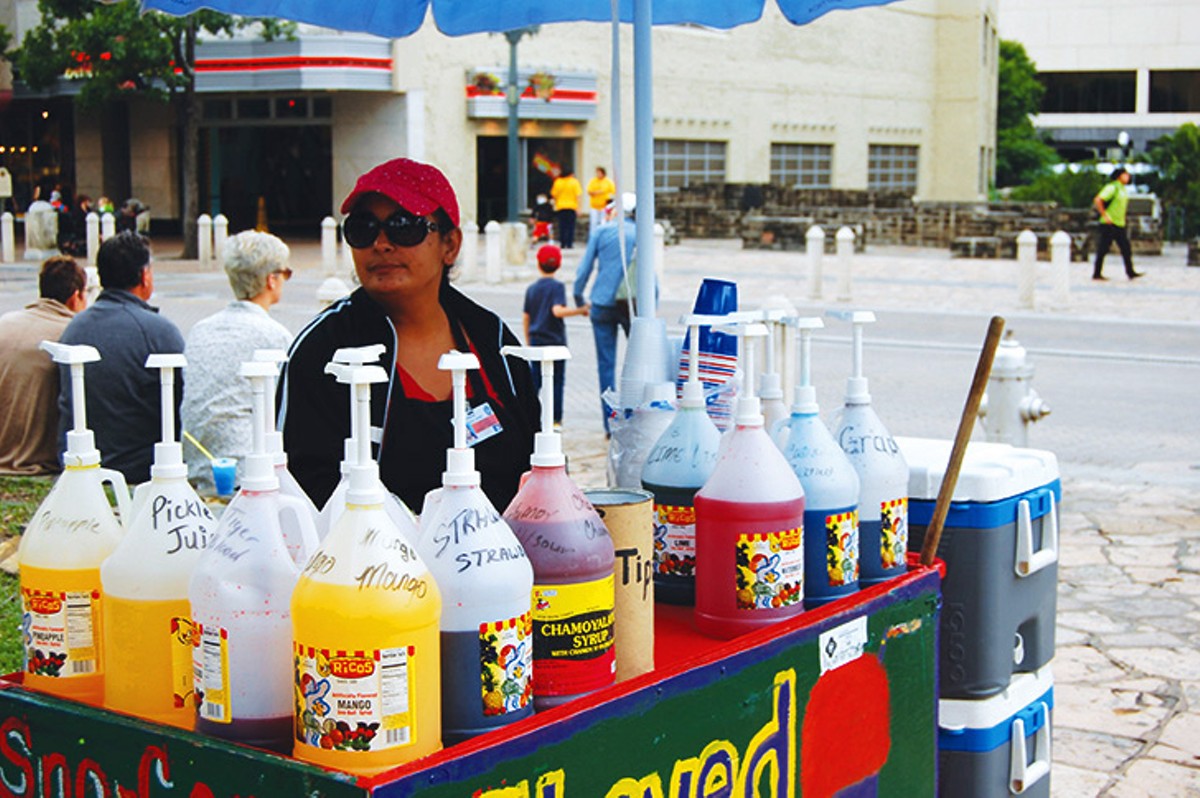 It was a slow day on Alamo Plaza for Cynthia Villarreal.

Alamo Plaza is unseasonably cool, which is bad news for Jessica Villarreal.

It's cloudy and overcast, threatening rain. The other people on the plaza — tour guides, out-of-towners, kids wearing coonskin caps — don't seem to mind.

But Villarreal wishes it were hotter. Her business needs heat, humidity and sweat to drive customers toward her little saccharine oasis near the eastern edge of Downtown.

Villarreal sells raspas on Alamo Plaza. She's done so for 27 years, starting when she was a kid helping her father, uncle and grandfather. She does other odd jobs here and there to support herself, but selling raspas has been a constant. And she's committed — although originally from San Antonio, Villarreal now lives in Corpus Christi. She makes the two-hour drive each day she's scheduled to sell raspas.

Villarreal's family and other raspa vendors have been Alamo Plaza staples for decades. But that could change.

A new master plan for Alamo Plaza is in the works, spearheaded by the General Land Office, the City of San Antonio, the Alamo Endowment Board and other stakeholders. Few details exist about the nascent plan, but a complete re-imagining of the plaza could be in store. And that may not include raspa vendors.

Villarreal and her sister, Cynthia, say they've heard that a push to remove vendors from the plaza is forthcoming. The City of San Antonio's Downtown Mobile Food and Vending Rules allude to it too:

"The adoption of this master plan will likely result in major changes ... to the Alamo Plaza Food Vending program including the temporary or permanent closing of some or all of the traditional vending sites," the most recent version of the rules states.

It's important to Jessica to continue her family's work. So she'll keep on selling snow cones.

"They did this to support the family. As long as they give us permission to stay here, I'll be here. This is all I know. Just raspas," Villarreal said.

Two blue umbrellas shade Jessica's rust-colored cart. Faded paintings of raspas sit in a line on its front. Her supplies are on top — flavored syrups, paper towels and coolers of pebble-sized ice.

She sells small raspas for $3, large ones for $4. On slow days, she lowers the price to a buck or gives them away to kids for free. She remembers being on field trips as a child and not having cash for a snack.

Jessica comes from a family of self-employers. Nearly all of her siblings punch their own ticket, selling everything from firewood to watermelons to carpetgrass. She left school at an early age to help her family with their various enterprises, and she values the autonomy.

It doesn't take much Googling to find articles and comments that decry the vendors' presence, arguing that it creates a carnival-like atmosphere unbecoming of the state's most sacred shrine. Even though her family has sold raspas on the plaza for decades, Jessica said she's long felt it would eventually end. That day hasn't come yet, but it feels like it's getting closer.

"I knew it was going to happen one day. Because I knew that one day rich people would come in and buy into [the plaza]," she said.

Watching her make raspas is like watching a golf pro at the driving range. The repeated, mechanical motions are automatic. She flips open the cooler and scoops the ice into a clear cup, rounds it off, then swings the cup over to her palette of syrups. She pumps a few equally distributed squirts onto the ice dome. There's a sticky spot just above her left wrist where syrup occasionally splashes off the hard ice.

She plunges a spoon and a straw through the ice (with the top half of the wrapper still sitting on the straw, of course) and trades it with the customer for a few bucks. The money goes into a grimy, clear plastic pencil box with a broken latch. The whole thing takes less than 30 seconds.

"You wanna raspa?" she calls to passers-by in a sing-song lilt.

Jessica's had enough practice to perfect her snow cone skills. It's something others aspire to, but don't always get the chance to try.

Only 32 vendors are issued permits to sell raspas on Alamo Plaza each year. Twenty-one of those spots are held by long-time vendors who have sold raspas since at least the 1980s and are guaranteed a slot if they meet Health Code regulations. That means that there are 11 slots up for grabs each year, which are allocated by lottery. Between 30 and 50 vendors annually apply for the open spots. Each pay the $400 application fee with no guarantee of a spot.

The final 32 rotate between six spots on the plaza (prime real estate is directly in front of the chapel — spots closer to the gazebo are less lucrative).

Jessica's sister Cynthia has applied for a spot of her own for the last five years with no success. Disappointed but eager to make a little extra cash, she agreed to help out at her father's cart last week.

"I could cut out the middleman if I [ran my own cart], but right now I am the middleman," she said, laughing.

Even with the vendors' long-term fate up in the air, Cynthia still plans to apply next year. She and her sister aren't pleased about the potential change, but they're also resigned to the fact that there's little they can do about it. If they're eventually pushed out to another corner Downtown, so be it.

"I still want to have the extra cash," Cynthia said. "But I know it wouldn't be the same."