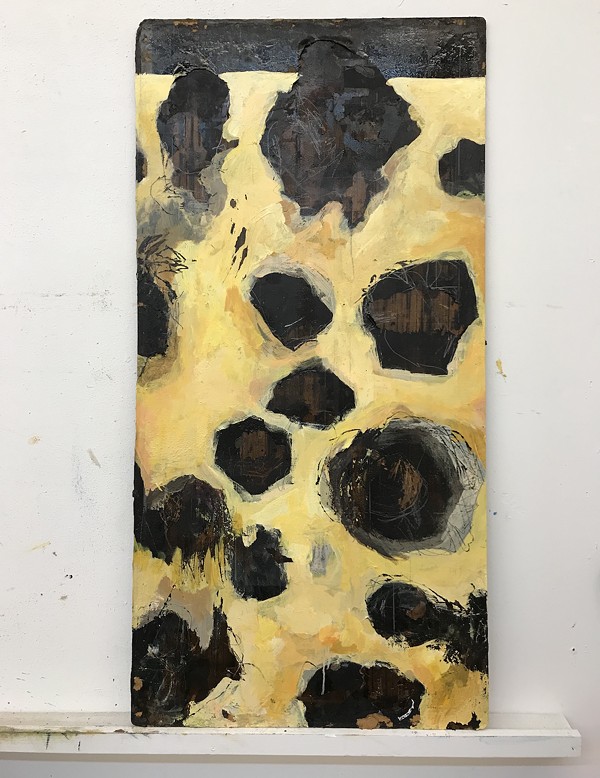 Jenny Crone
In the 1990s and early 2000s, the late abstract painter Alberto Mijangos guided a community of artists at the Southwest School of Art and Salon Mijangos (now the 1906 South Flores arts complex) who benefited from his instruction but saw him as a spiritual guide as well.

Born in Mexico City in 1925, Mijangos eventually settled in San Antonio, becoming the first director of the Mexican Cultural Institute and fully committing his time and energy to creating art in the 1980s. In a 2003 interview with Cary Cordova for the Archives of American Art at the Smithsonian Institution, Mijangos said, “My feeling is that everybody has creative possibilities. There’s some romanticism about what the artist is all about, but I really believe that every human being has potential creative powers.”

On Wednesday, AnArte Gallery is hosting the group exhibition “The Inspiration of Alberto Mijangos,” featuring several of Mijangos’ former students, including Linda Lang, Cindy Palmer, Sandy Whitby and the artist’s daughter Laura Mijangos. Known for her subdued use of color and textural surfaces reminiscent of the industrial landscape of her native Pittsburgh, Whitby pays tribute to Mijangos with her work titled Open Window. The painting honors Mijangos’ “belief in what he called every artist’s unique ‘signature,’ their way of expressing themselves through their art.” The group show complements the current Mijangos retrospective at Centro De Artes.

1 article
Get our top picks for the best events in San Antonio every Thursday morning. Sign up for our Events Newsletter.
Scroll to read more Arts Stories & Interviews articles
Join the San Antonio Current Press Club