You know those three Oscar categories that always seem to bust your predictions chart every single year? This year, walk into your Oscar viewing party feeling a bit more confident. Starting February 9, all 15 short films nominated for the 90th annual Academy Awards (March 4) will screen at the Santikos Bijou Theater in four separate programs — Animated Shorts, Live-Action Shorts and Documentary Shorts A and B. The Current has seen all the nominees, and here’s what we think: Although it’s rare for any of the short film categories to feature familiar names in their films’ credits, this year the animated category includes one of the biggest. Nominated as a producer of Dear Basketball is five-time NBA champion and Los Angeles Lakers great Kobe Bryant. Directed by character animator Glen Keane and based on a letter Bryant wrote for The Players’ Tribune in 2015 about his retirement from basketball, Dear Basketball is a beautifully hand-drawn animation and personal poem that is both impassioned and inspiring. Narrated with affection by Bryant himself (and scored by John Williams!), his lyrical farewell to basketball also shares a message of finding inner peace when letting go of something you love.

Motion Pictures in Arles
Garden Party
The quiet, peaceful backyard of an abandoned mansion is the setting of Garden Party where a host of frogs and toads explore nature and do what frogs and toads do. The short, however, doesn’t limit its amphibious stars to the outside world, as we watch them infiltrate the empty estate to investigate their surroundings and eat leftover desserts. As the situation unveils something much more sinister, Garden Party lightens the mood before wrapping up with some effective dark humor that gets to the core of the bleak narrative.


A stop-motion animated short from France, Negative Space is the charming, imaginative and darkly funny story of a man who reminisces back to his childhood when he and his father would bond over the finer details of packing the perfect suitcase. Rich with detail and featuring a wonderful underwater scene with “underwear jellyfish,” this Wes Andersonesque animation is a charmer.

Pixar
LOU
What animation contest would be complete without an entry from Pixar or Disney? At least one of them has received a nomination in the last seven Oscars. This time, Pixar’s LOU tells the tale of — well, actually, we’re not really sure what “Lou” is, although he (?) gets very upset when an elementary school bully starts stealing the items from inside a lost and found box where he lives. Originally released last summer before Cars 3, Lou is cute and playful enough although the final moral-of-the-story homestretch doesn’t make much sense.

Revolting Rhymes, based on a collection of poems by late author Roald Dahl (Charlie and the Chocolate Factory, James and the Giant Peach, Fantastic Mr. Fox), offers audiences an alternative take on popular fairy tale characters like Little Red Riding Hood, the Three Little Pigs and Snow White, by blending their stories together into a medley of minor amusement. Connecting the tales together through the Big Bad Wolf and his lupine family, Revolting Rhymes doesn’t capture the same enchantment as either the original fairy tales or Dahl’s book, but should get a pass from most indiscriminate children. 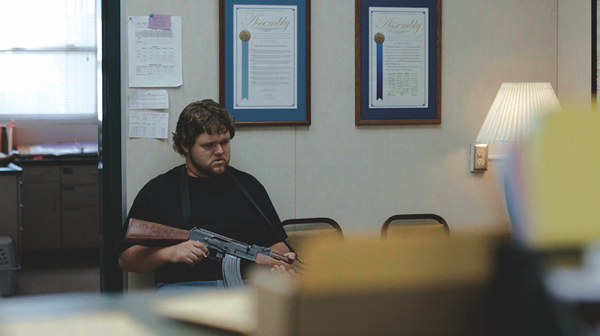 Inspired by the actual calls to 911 that were received during a school shooting incident in Atlanta, Georgia in 2013, DeKalb Elementary is a tense albeit sympathetic reenactment of the moments an armed young man shares with an elementary school front-office receptionist during a stand-off with police. The dynamic between actors Tarra Riggs and Bo Mitchell is authentic and humanistic as writer/director Reed Van Dyk allows the scene to take form one heartbreaking second after another. Quirky in its delivery, The Eleven O’Clock stars actor Damon Herriman (TV’s Justified) as “Dr.” Nathan Klein, a delusional patient who has scheduled an appointment with a new psychiatrist thinking he, too, is a psychiatrist. The back-and-forth dialogue is exceptionally clever as we watch “real” doctor Terry Phillips (Josh Lawson of TV’s House of Lies and the film’s screenwriter) attempt to corral his patient’s mind back into their therapy session before he loses his own. Playing out like a highly-entertaining comedy routine, The Eleven O’Clock is a flat-out riot.

Based on the 1955 murder of 14-year-old Emmett Till in Money, Mississippi, My Nephew Emmett tells the true story of the night Till (Joshua Wright) was killed for a minor encounter that took place earlier in the day between him and the wife of one of his murderers from the perspective of Till’s great-uncle Mose Wright (a subtle yet striking performance by L.B. Williams), who can only plead with the two white men who force their way into his home and kidnapped his nephew. Moving and infuriating, writer/director Kevin Wilson Jr. taps into a range of emotions and exhibits hate in its most primal form.

Slick Films
The Silent Child
In The Silent Child, director Chris Overton and screenwriter Rachel Shenton explore deafness from the perspective of a shy 4-year-old girl (Maisie Sly), who begins to break out of her shell when her seemingly inattentive family brings a young social worker (Shenton) into their home to help the child communicate. Through compassionate storytelling, The Silent Child paints a pure picture of what it’s like to be part of a world that doesn’t recognize your exceptionality.

Ginger Ink Films
Watu Wote
Distrust and anger between Christians and Muslims in eastern Africa comes to a head in Watu Wote: All of Us, a German/Kenyan production that highlights the goodness individuals can have for one another despite their religious differences. Based on an actual 2015 event, Watu Wote tells the story of a group of Muslims who protected a Christian woman from Al-Shabaab militants during a cross-country bus ride. There is a lot of history to unpack in a 22-minute drama, but director Katja Benrath keeps the tension high as he offers viewers hope for humanity.
Documentary Shorts
click to enlarge

Laura Checkoway
Edith+Eddie
Featuring America’s oldest interracial newlyweds, the 95- and 96-year-old title characters in Edith+Eddie give new meaning to the phrase “a love story for the ages.” When a family feud threatens to separate the couple, Edith and Eddie put their faith in God to keep them together. Director Laura Chekoway captures both the sweet and tragic moments during the unfortunate situation and does so with empathy and heart.

Heaven Is a Traffic Jam on the 405 follows 56-year-old Mindy Alper, a successful visual artist living in Los Angeles, whose mental illness has affected her life for as long as she can remember. Through interviews, archive video and photos, and Alper’s own works of art, director Frank Stiefel shares an intimate portrait of a woman who understands her limitations but refuses to give up being who she is — a free and creative soul.

Netflix
Heroin(e)
In Heroin(e), three women — Jan Rader, a fire department deputy chief; Patricia Keller, a drug court judge; and Necia Freeman, a volunteer for a nonprofit that feeds the poor — do all they can to make a positive change in the lives of drug addicts living in Huntington, West Virginia, a city with an overdose rate that is 10 times the national average. Director Elaine McMillion Sheldon delivers an unflinching and realistic look at the problem of drug use in this specific corner of the U.S. and puts a face on those willing to reach out and give guidance.

Director Thomas Lennon takes viewers into a classic French restaurant in Cleveland, Ohio, run by men and women transitioning from the prison system in Knife Skills. Doubling as a culinary school, the restaurant recruits former inmates for a challenging six-month training course that puts aspiring employees’ feet to the fire. It’s a fascinating journey as we watch these committed individuals breathe life into an exciting new business and leave their criminal history behind by finding pride in their next calling.

African-American school teacher Breaion King lives through a nightmare scenario in Austin in 2015 when she is pulled over by police for speeding and is violently arrested. In Traffic Stop, director Kate Davis interviews King about her childhood, her career as a teacher and how the confrontation between her and the officer changed her life forever. Traffic Stop is an eye-opening look at one woman’s frightening experience — an experience felt by far too many black people in this country.