All Gust No Glory in Disaster-prone ‘Into the Storm’ 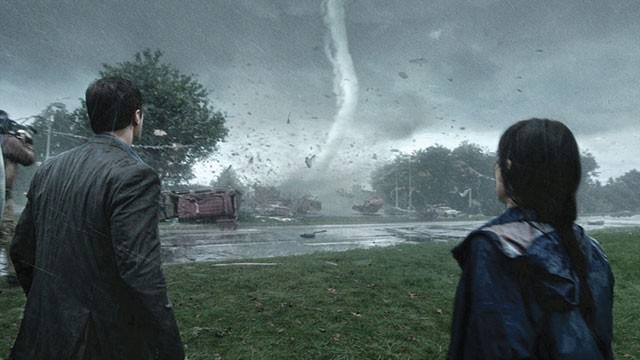 As ridiculous and more accessible as made-for-TV/straight-to-video natural disaster B-movies have become in recent years (thanks in large part to companies like SyFy and The Asylum), makers of these campy flicks, which include titles like 2012: Ice Age, NYC: Tornado Terror and the pop cultural phenomenon that is Sharknado, know their ideas are incredibly easy to mock. Destroying cities by way of speeding glaciers, electrically charged vortexes and airborne great whites isn’t exactly Shakespeare. Still, studios involved with these movies usually embrace the stupidity, especially since they’re cheap to produce, easily digestible and give Dean Cain something to do when he’s not counting his Superman money.

Herein lies the problem with Into the Storm, a disaster film that takes itself so seriously, moviegoers will wish its generic title ended with a phrase like “of Radioactive Sea Slugs” or “of Batshit Crazy Tea Party Zombies.” At least they’d know what third-rate garbage they were getting and could consume it while falling asleep on their own couch at 2 a.m. Instead, director Steven Quale (Final Destination 5) and screenwriter John Swetnam (Step Up All In) try to create a narrative where the emotional heft is as powerful as the film’s 300mph winds tossing around 18-wheelers and commercial airliners. What they end up with is fake sentiment coming from a collection of pitiful characters that deliver cliché, throwaway dialogue like “This is the biggest tornado I’ve ever seen!” and “I’ve never seen anything like this!” and “This one is bigger than any storm that has ever been!”—all with a straight face.

If that’s not enough to make audiences cower under a desk, Quale adopts the often-annoying and gimmicky (albeit ever-so-popular) “found footage” storytelling device, but never owns up to it. He arms almost everyone in his cast with a camera (storm chasers are making a documentary; high school students are shooting time capsule testimonials; stereotypical yokels are filming stunts hoping to get YouTube famous), but then decides to use other random perspectives that make absolutely no sense when taking under consideration the impossibility of capturing all these shots when a 3-mile-wide cyclone is mowing everything down. There are plenty of times during the movie when there’s no telling from what vantage point this tired mess is unfolding.

It’s obvious Quale and Swetnam wanted to follow a similar path of destruction as a summer blockbuster like 1996’s Twister, but even that mindless Steven Spielberg-produced moneymaker had a few laughs and intense moments. Ignore the missing logic, unconvincing performances, and tinge of environmental proselytizing and simply focus on the computer-generated wind ripping apart a computer-generated barn (sans cows), and Into the Storm still lacks the force it would take to blow out a candle on a birthday cake.