'All is Lost' Except Redford's Good Looks (and Talent) 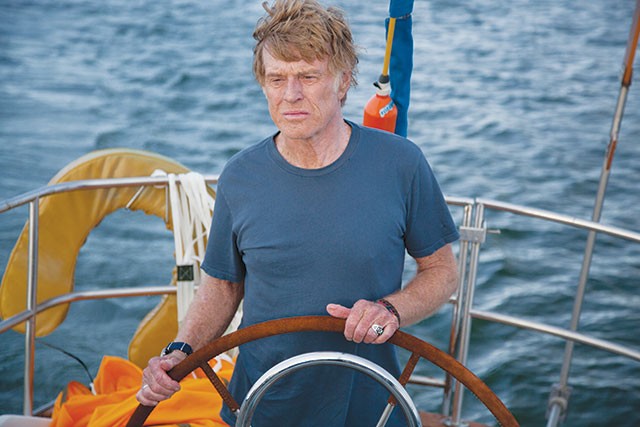 At 77, Robert Redford doesn’t really have to prove anything to anyone. He had a string of iconic films in the 1970s and early ’80s, won the Best Director Oscar for Ordinary People, launched the Sundance Institute and film festival, and still stays active in the industry—both in front of the camera and behind. Not bad for a guy who started his career appearing as Death in an episode of the original The Twilight Zone.

In J.C. Chandor’s minimalist All Is Lost, Redford reminds audiences that—despite a couple of decades of middlebrow movies—he is still a commanding screen presence. Beyond his all-American good looks and flaxen locks, Redford reacts to people and situations with dogged self-possession and unpretentious intelligence. You can see the character’s complexity in his eyes and expressions as Chandor’s lens hovers inches from his age-weathered face. No explanations need to be given for what his character is thinking or feeling at any given minute and, not coincidentally, Chandor has made Redford’s reactions the centerpiece in this nearly wordless film.

Opening with a brief monologue (an unsentimental farewell letter scratched onto a scrap of paper, stuffed into a container and tossed into the ocean), All Is Lost practically goes mute as we flash back to eight days earlier. Redford’s unnamed character (the credits refer to him as Our Man) is the lone sailor on a 39-foot racing yacht named Virginia Jean, and he has been awakened by the sound of a crash. He soon discovers that a rogue shipping container has torn a hole in the boat’s fiberglass hull. With his cabin taking on water and his navigation and radio equipment ruined, he calmly sets about patching the damage and drying out his gear. An attempt to send an S.O.S. results only in static.

At first, Our Man looks to have things in hand. He studies his emergency instruction manuals, improvises when necessary and diligently attends to his damaged vessel. He is nothing if not attentive and methodical. But the sudden arrival of a violent squall and a series of unfortunate setbacks remind us that even when you do everything right, nature rarely plays fair.

The next 108 minutes pit man against the elements and one can’t help but recall the work of Jack London and Ernest Hemingway, the most obvious comparison being The Old Man And The Sea. Stranded 1,700 miles from the Sunda Strait in the Indian Ocean, Redford’s character discovers that privileged solitude comes with a price, and self-sufficiency is a tragic illusion.

Chandor realistically charts the minutiae of survival and offers a counterpoint to the non-stop chatter and blatant sentimentalism of Gravity. It’s an enthralling and immersive—if oddly impersonal—experience that trades in existential dread and frustration, as Our Man struggles to take control of his situation. But unlike Life Of Pi, there are no grand themes or allegorical subtexts to mine. Redford’s character is presented without personal or emotional context (there is only a fleeting hint that his family life may have been strained), and his conflict is primal, a hard slog to survive one more day. Some will inevitably suggest that the container leaking children’s sneakers and the indifference of passing cargo vessels are a comment on the hollow and damaging pursuit of capitalistic desires. Maybe they’re right, but it’s a thin layer of icing on an otherwise unadorned cake.

This means that the entire film hinges on Redford’s near-silent performance. Fortunately, he brings both physicality and emotion to the role, subtly shifting from anger to surprise to despair. It’s a completely naturalistic performance, stripped of ego or artifice, and you often forget you’re watching a Hollywood icon. Only Alex Ebert’s occasionally intrusive music score dispels the carefully constructed intimacy and immediacy.

Chandor’s patient and unsentimental examination of human perseverance, ingenuity and mortality ultimately delivers an ambiguous ending. As you leave the theater, don’t be surprised if the experience sits uncomfortably in the back of your mind. Redford’s character may have led a successful life, but he, like all of us, is at the mercy of time and the elements. All Is Lost is a reminder that we are all slowly marching toward the grave—watery or otherwise.