Ana Gasteyer on 'SNL,' 'Mean Girls' and Her Show at Woodlawn 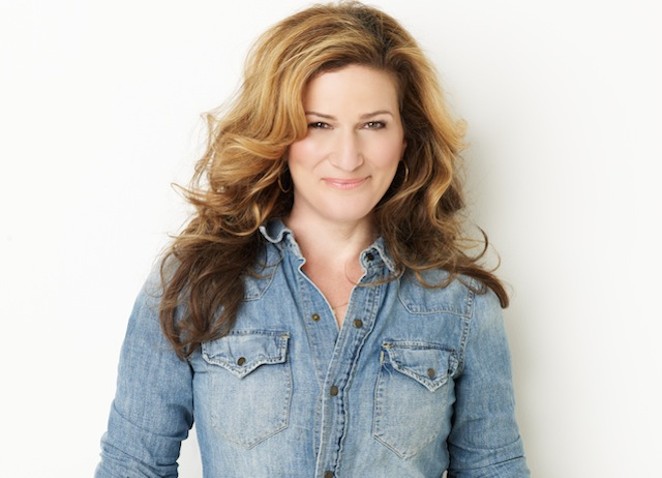 Courtesy
Don’t put comedian/actress/singer Ana Gasteyer in a box. She wasn’t put on this earth to entertain audiences in only one specific way. Gasteyer, 47, will show her range as the first of four performers invited to participate in the Broadway @ Woodlawn Theatre Celebrity Series with XM Radio personality/host and pianist Seth Rudetsky over the next six months. During the November 8 show with Gasteyer, who is a Saturday Night Live alum and Broadway and TV/film actress, Rudetsky will interview her about her life and career. He will also accompany her on piano while she performs songs from her Broadway past as well as her debut album, I’m Hip, a compellation of some of her jazz favorites, released in late September. During an interview with the Current, we talked to Gasteyer about what we can expect from her show at the Woodlawn, her new jazz album and what kind of effect she thinks Saturday Night Live has on politics today.

Talk to me about the celebrity series at the Woodlawn Theatre. I understand it is going to include musical performances and an interview with you, correct?

Yeah, it’s going to be a really unusual, intimate and fun night of interviews and songs. Seth is incredibly quick-witted. To find a combination of someone that is funny and musical is unusual. They’re two brands that work so well together. [Seth and I] have been friends for a long time. We’ll sing songs from my record (I’m Hip) and from Broadway. It’s like an insider’s peek into the life we live out here in New York. It’s very weird and unorthodox.

So, since Seth is such a good friend, does he have personal stories about you that you don’t necessarily want him to include in the show?

Sometimes he does manage to do that, and I am mortified when he does. I have to tell him, “Can we not tell that one again about my mom? She’ll get really mad.” (Laughs) But it’s always fun to perform with him because he understands comedy really well.

You started on the stage before TV and film. Is it still as satisfying being center stage as it was when you, say, majored in theater in college?

Oh, absolutely. I’ve done a lot of Broadway shows, so, for me, it’s kind of a balancing act in my career. I did Wicked as recently as six years ago. [TV/film and the stage] have thrills of their own. They’re very different disciplines in many ways. They’re all necessary for an interesting career.

You recently released your very first album, a jazz album called I’m Hip, which features you singing songs from the late 50s, early 60s. What is it about that era you like so much?

I’m an entertainer, so that era is incredibly fun because it fuses together the two paths of my career. Nowadays I feel people look at you and tend to put what you do in a box, like you’re either a comedian or a Broadway singer or a jazz singer. The thing about this style and era is that it brings it all under one roof. Back then, entertainers were expected to really sell a song and have a great time and tell a story well and still be a really fun on-stage personality without acting. That’s why this era speaks so specifically to me.

Do you feel like you were born in the wrong era?

I definitely was. I think I’m an old-timey performer. It would’ve been a really fun time to perform [during the late 50s], particularly in terms of live music. I would’ve loved to travel around the country with a bunch of boys in a band.

I know the title of your new album is the name of a Blossom Dearie song, but what makes Ana Gasteyer so hip?

(Laughs) My desire to keep up with the kids.

Well, you have two kids, so do they think you’re a cool mom?

I think so. We try to keep it real. I mean, I think they’re pretty embarrassed by me at the same time. I always have to explain to them that I could be a lot worse.


Your "One Mint Julep" music video is great. What was the idea behind it?

It’s the first video we did from the album. The goal was to have a great time and sing a song from the era that I love. That’s definitely what the video does. I wanted it to be a really fun, highly-entertaining song that didn’t take itself too seriously.


You recently met Martha Stewart on Late Night with Seth Meyers and did a funny bit where you fake apologize to her for your Saturday Night Live impersonation of her. Was that the first time you actually met her?

No, I had met her a few times, but this time was very memorable and fun because she was up for the challenge. Back when I was on SNL, she was pretty big about having me come around. She always understood imitation is a form of flattery. She’s always been gracious about it.

Have you ever run into anyone else you’ve spoofed before?

I’ve actually met all of them—Celine Dion, Hillary Clinton, Joan Rivers—at one point or another.

As a comedian, was Joan Rivers someone you looked up to in the industry?

She was like heroine for those of us who grew up under her influence. She had a great sense of humor about herself. She was self-deprecating, appreciative and kind.

It’s been 25 years since you graduated from Northwestern, and they just invited you back to lead their homecoming parade. I’m guessing you might be the funniest alum to come out of that school even though I’m sure Stephen Colbert would disagree.

Well, Colbert and Seth Meyers were both there, so I’m not sure I am the funniest. Chicago is the birthplace of improvisational comedy, so it had a huge influence on all of us and what we became. It was incredibly fun to go back and celebrate with my classmates. I was so proud.

You parodied Hillary Clinton during your time on SNL. How much influence do you think a show like that has on politics today?

The job of the show has always been to reflect back what’s funny about the state of politics. It’s getting messier and messier now, so there is more to make fun of. Hopefully, that’s in a positive way, but I’m not so sure.

It’s more than likely that Clinton is going to run for President in 2016. Do you think the actresses that are playing her now on SNL have more pressure on them than you or Amy Poehler did?

I don’t think any actor goes in hoping to have a voice in an election. I don’t think it’s in our agenda. Our job is just to have fun and be entertaining.

It’s the 10 year anniversary of Mean Girls. Did you ever think that in only a decade, this comedy would become such a classic?

It’s crazy. It’s really exciting. I mean, I think part of it is because it is set in high school, and everybody likes to make fun of high school in movies like Fast Times at Ridgemont High and Heathers. They do have this timeless quality to them. It’s nice to be a part of that for people.