Analog is Not Dead: Two Weeks In San Antonio 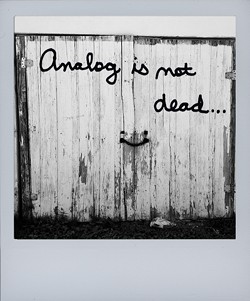 --ANALOG IS NOT DEAD—

So I wanted to do this blog not just as an excuse to shoot more film, but to become more attentive to everything around me.  So I’m going to post the photos in the order that I took them.  This roll of film spans two weeks approximately.  I think what I enjoy most is dropping rolls of film off to get developed and getting back the prints to see what I had shot.  I usually forget what I had shot and it’s kinda like getting a letter or present from a friend in the mail.  I think people still write letters to each other...?

I like to take these “instagram” exploring trips where I just drive and look for interesting things to photograph.  My Friend Eli works at Bakery Lorraine, so I took a drive, parked and walked around.  I found this house and it just stuck out.  You can find my instagram account  @BRAINOLD if you want to follow these little exploring trips I take.

I continued walking and found this bar, its name says it all.  But wait- a Rock-n-Roll bar that plays all kinds of music?  I didn’t know what to think of this place, but the color of the building was enough for me to stop.

So, Erik Sanden of Buttercup and Gran Marais has been doing musical performances at the Liberty Bar every Tuesday in May from 7:30 – 9:30pm.  He calls the shows “Sunbeam Capture Tuesday,” his first set happens before the sunsets and the second after nightfall.  I really enjoyed his music and the occasional poem he read.  He was discussing how he hates playing venues where there always seems to be a TV playing SportsCenter and how inattentive people are to the musician that is on stage.  I can tell you that there were no TV’s there and everyone was there to hear music. It was so quiet and just great.

Joe Reyes and Odie joined Erik for a couple of songs.

I don’t know why I prefer going to these type of shows, it’s probably cause everyone is there to hear music and have some good food and drinks.  You could just feel the good vibes from the people in attendance.  There’s nothing worse than going to see a show and it’s befuddled by a storm of conversational diarrhea.  I read somewhere you can do certain breathing exercises to block out all that audio clutter, but I really haven’t seriously tried it out.  If you ever get a chance to see Erik or Buttercup or Grand Marais play, go see them perform, it really is a unique musical experience that you will not forget.

A couple of friends of mine invited me with them to North Padre.  I’ve been to the unmistakably charming South Padre with its abundant seaweed and jellyfish and the occasional oil spills, but I was game for any beach and a chance to get away for a day.  This is the only photo I took that day.  I don’t know why this little girl was burying her barbies but I liked it.

Every time I drive down Blanco, I see this bar called Texas Ice House. It’s kinda a mish mosh of a patio and indoor bar and I've been curious to go there. I figured this would be a good time to go and see what this place was about.

“The Best Little Ice House in Texas. Where friends Meet.”

This place kinda has a “Bar America” type feel but maybe it’s all the wood paneling? I dunno, but it’s mostly local people from the neighborhood that go. The bartenders were really friendly and even offered some free nachos! Yes I love nachos.

This is the manager of the Texas Ice House, her name is Vivian Leigh.  I think that was the name of the actress that was in the original Psycho? No wait she was in Street Car Named Desire.  Yea that sounds right.  Well, she saw my camera and asked me, “what’s with the camera?”  I told her I was doing a photo blog and if she minded if I took a couple of photos.  She agreed and was really nice and seemed to know a lot of the regulars there at the bar.  I enjoyed my free nachos and cheap beer and watched the 2nd half of the Spurs game.  Not sure if I’ll go back on such a hot day, they only have window units and it can get a little hot inside, but it’s a unique spot to say the least.

This was an accidental photo when I was trying to adjust the aperture to get the correct exposure.  It’s in my friends’ car right in my neighborhood.   Accidents aren’t always a bad thing.

So it was a Tuesday night and there was an EP release for my friend Eli Medina’s band The Sound of Deliverance at the 1011.  The name of their EP is “The Call Out”.   I always seem to get to venues too early, so I took this photo of the outside patio while I waited for people to show up.

This is my friend Edwin J. Stephens who is an amazing musician and has also been doing lots of the producing for many of the local musicians here in San Antonio.  He goes by the moniker of Wally Dead Walrus and records music at his studio, appropriately named Ashby House Studios.  He was up 1st.

Chris Conde, whose stage name Ghost Electric, was on 2nd.  I can’t really explain his musical style, but he raps and plays the banjo.  If you check out that Banjo McCrunk song link above, you’ll get a better idea of what he does. My friend Edwin produced and recorded that track and Tiffani Leavitt did the hook vocals for that track and it sounds amazing.

The last band to play was Least of These from Denton, Tx. This was the last photo from the roll. I shot these on Fuji Pro 400H color film with a 35mm rangefinder camera with a 28mm lens.  I’m hoping you guys are digging this film only photoblog and I will continue to share my wanderings and findings with you.