Analysis: A Persistent Coronavirus Thriving Against an Inconsistent Texas Government 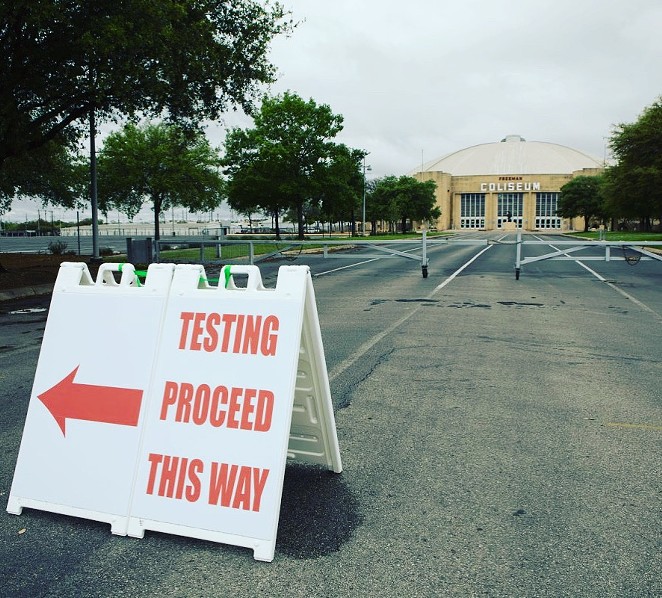 Twitter / @SAMetroHealth
COVID-19 testing site at Freeman Coliseum in San Antonio
The spread of the coronavirus in Texas is accelerating. State leaders dither, following the example of national leaders — all of them afraid to impose unpopular restrictions and many of them doubting epidemiologists and other medical and public health officials as overly dramatic Chicken Littles.

But the numbers pile up; maybe the sky is falling, after all.

Didn’t all of this already happen, just a couple of months ago?

Over the last week, Gov. Greg Abbott has begun repeating some of the same moves he made in March, when the coronavirus was a fast-rising concern that had infected fewer than 100 Texans. He’s trying to get Texans to take this seriously, to do the things within their control — washing hands, wearing masks, keeping social distances — while trying not to reimpose the kinds of restrictions he put in place at the end of March and then began dismantling a month later. And on Friday morning, the governor ordered bars and river-rafting businesses to close, and restaurants to pare their occupancy to 50%.

The consequences of the state’s actions have been striking: The spread of the virus slowed in April and into May, and began to rise — slowly at first, then faster — and gathered speed and strength rapidly during the last three or four weeks.

With that resurgence, restrictions are seeping back into the state’s responses: allowing local governments to order businesses to require employees and customers to wear masks, enacting new safety rules for day care centers, limiting the sizes of large gatherings to 100 people, and shutting down elective surgeriesand other procedures in four of the state’s most populous counties.

“If we are unable to slow the spread over the next few weeks, then we will have to reevaluate the extent to which businesses are open, because if it’s not contained in the next couple of weeks, it will be completely out of control and Texas will have to ratchet back,” Abbott said in an interview on NBC DFW.

Hit rewind, and browse some of the news from March, when the coronavirus became a widespread concern in Texas. In the second week of that month, school districts, colleges and universities started canceling in-person classes. A few days later, on Friday the 13th, Abbott declared a statewide emergency. He wanted day care centers, prisons and nursing homes to limit visitations, and for state workers to start working from home when possible. At that point, 50 people in Texas had tested positive for COVID-19.

The following Monday, the governor said Texans should expect “exponential” growth in the number of cases. Dallas and Houston ordered bars and restaurantsand other establishments to close everything but take-out and delivery business. A few days after that, Abbott issued a similar statewide order, initially saying it would last two weeks. The state delayed the primary runoff elections a day later. On March 22, the governor ordered health care facilities to postpone procedures that were “not medically necessary.”

The pushback against restrictions was already ginning up; Lt. Gov. Dan Patricksuggested he’d rather die from the virus than see the economy ravaged. Abbott, meanwhile, was becoming more alarmed, saying, “It’s clear to me that we may not be achieving the level of compliance that is needed.”

By the end of March, the governor had said travelers from other hot spots — New York, New Jersey, Connecticut and New Orleans — should self-quarantine for 14 days. And on the last day of the month, Abbott said schools would be closed until at least May, and said Texans should stay at home except for essential activities through the month of April.

Now it’s June. The bars are open. Restaurants are serving in their dining rooms. You can get your hair cut or styled. The state wants to open public schools for in-person classes in about two months.

And the virus is advancing, setting new records every day. Our attention moved to other things, but the coronavirus didn’t move with it. For Texans and their governor, it’s like March never ended.