Analysis: At Beto O'Rourke's San Antonio stop, the vibes felt familiar, but he'll need to build on them 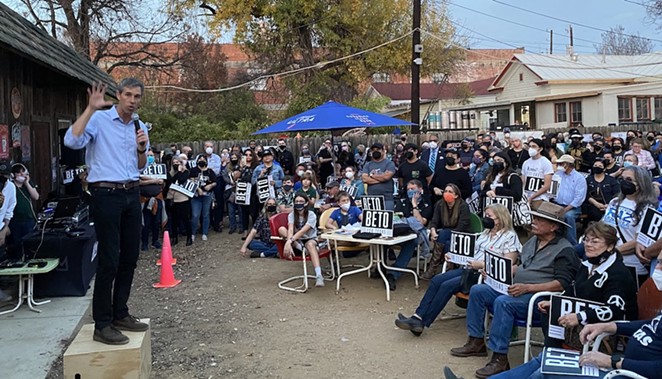 Sanford Nowlin
Beto O’Rourke enthralls the crowd at the Friendly Spot.
Cheered on by scores of supporters wearing his campaign shirts and hoisting up signs bearing his name, Democrat Beto O'Rourke made his case Wednesday evening in San Antonio for unseating Republican Gov. Greg Abbott.

Beer flowed and the crowd cheered as the former El Paso congressman delivered his 20-minute stump speech at the Friendly Spot, the popular Southtown ice house. After he climbed down from a portable plywood platform, attendees queued up for photos with the candidate in a line that snaked for yards.

For those who recall the narrow-miss campaign O'Rourke ran in 2018 to take the U.S. Senate seat still held by Republican Ted Cruz, the scene was deja vu all over again. The energy was palpably similar, the candidate's rhetoric no less dynamic.

During his speech, O'Rourke checked off a laundry list of Abbott's failures, including the two-term incumbent's inability to manage the pandemic, to keep the power grid functioning and to expand Medicaid to help the state's million of uninsured. The Democrat drew big applause when he blasted the governor's part in the state's near-total abortion ban and his demonization of immigrants.

"These are the wages of our failure to elect people into positions of public trust who will deliver for all of us — those who will not listen to us, who do not trust us, who do not reflect our values and priorities," O'Rourke told the rapt crowd. "This is where we end up. But the good news is we can change this."

Recent campaign finance reports show O'Rourke remains one of the Democratic party's fiercest fundraisers. In the first six weeks of his campaign, he pulled in $7.2 million, an amount his team trumpeted as the most raised by any Democratic campaign at the kickoff of a race.

And, as in 2018, O'Rourke is running against a candidate who's not exactly the paragon of popularity. Democrats and moderates loathed the unctuous Cruz — still do — and Abbott's mishandling of the pandemic and the deadly February collapse of the state's power grid have damaged his own political brand.

This time, though, O'Rouke has a floundering presidential run to live down — one where he proclaimed during a national debate that "you bet" he'd take away gun owners' assault rifles. That's not the kind of sentiment that sits well with Texans he needs to reach.

What's more, O'Rourke is taking on an incumbent who's no fundraising slouch either. Abbott raked in $19 million in the second half of last year, building his war chest to $65 million. The New York Times last month reported that the incumbent often blocks out eight hours of his daily schedule to phone deep-pocketed donors for more cash.

During his stop at the Friendly Spot, O'Rourke repeatedly urged followers to reach across the aisle to disillusioned Republicans, to people they don't know and to those who haven't voted before.

He's right. He needs their votes if he's going to have a chance. Even with energetic support from Democrats and the wind of the state's demographics blowing at their backs, this will be a tough haul. A lot of Republicans in this still-red state may not like Abbott, but it remains to be seen whether they'll break ranks.

Toward the close of his speech, O'Rourke urged supporters to think about how they wanted to feel on Nov. 9, the day following the election.

"We want to be exhausted, a little hungover, knowing that we've given all we can possibly could have to this effort," he said. "We knocked on every door, we made every phone call, wrote every single letter to reach every single voter in the state of Texas — and we wrote nobody off."

Whether that turns out to be the case remains to be seen. But, in political terms, November is still an eternity away.