Analysis: Order Texans to Stay Home, or Risk Impeding the Fight Against COVID-19? 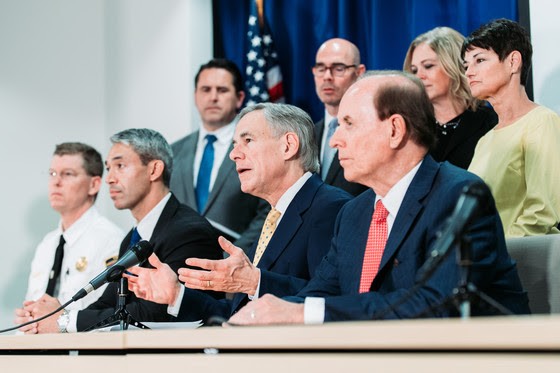 Office of the Governor
Texas Gov. Greg Abbott appears Monday at a press conference with San Antonio Mayor Ron Nirenberg and Bexar County Judge Nelson Wolff to discuss COVID-19 testing.
Disasters always test leaders, but a pandemic isn’t a hurricane or a tornado. It doesn’t come and go in a day or a week. It’s not confined to a geographic area. It’s invisible. It preys on the social ties that bind us into communities, cities, a state.

But that’s what government is for, isn’t it? When the proper response to a crisis is collective action and not individual action. When the path to safety is in the opposite direction many of us would go if left on our own.

The crowdsourced solution to the coronavirus gave us shortages of toilet paper and bacterial wipes, dried beans and packaged pasta. That’s just a peek at what happens if we stick with the individual response. Experts are telling us that the wave of the virus could easily overwhelm hospitals and health care providers, putting medicine out of reach of many of us as cases of the disease peak.

“There have been questions raised about whether Texas as a state must immediately go into a shelter-in-place status,” Abbott said Sunday, adding a few moments later, “We need to do several things first.”

He said his earlier executive orders — closing bars, restaurants, gyms and limiting the size of public gatherings — are still fresh, and he wants to see whether what’s already been done is enough. He said more than 200 of the state’s 254 counties haven’t reported a single case of the coronavirus. After saying that what might be appropriate for urban areas isn’t necessarily suited to rural parts of the state, he threw it to local control: “Local officials have the authority to implement more strict standards than I have implemented,” Abbott said. At this time, he said, it’s not the appropriate approach for the whole state.

It’s already helped, and in very short order, to tell people to stay home as much as they can. Now the question is whether that’s enough. Medical and civic leaders want Abbott to take the next step, to issue a statewide shelter-in-place order to minimize the spread of COVID-19, like Louisiana and other places have done.

It requires politicians to go against their instincts to tell people what they want to hear — and to instead tell them what’s good for them, including government-ordered confinement.

The same dilemmas appear on the economic side, too. State Comptroller Glenn Hegar decided last week not to waive the deadline for sales taxes; businesses that collected taxes on purchase in February had to turn that tax money over to the state, as usual, last Friday.

Some of those businesses are hurting, and it might be useful to hang onto that money for a month to try to keep things going. But Hegar initially decided that the taxpayers — consumers — had already paid the taxes and that the money needed to be used for hospitals and first responders and everything else the government does.

The sales tax deadline just happened to fall at the hardest point on the calendar, on the Friday of the week when a significant part of the state economy came to a sudden halt, when government ordered the closing of all of the businesses where people gather for food or entertainment or shopping. A number of lawmakers implored Hegar over the weekend to give businesses more time to pay.

Likewise, it’s not easy to order everybody to stay in their house, especially if there’s some penalty threatened for coming out for nonessential business. And the rewards of that isolation, while critical, are invisible.

It’s not easy to tell people in this self-involved culture to sacrifice personally for the greater community. Staying home if you’re sick is a no-brainer, but if you’re well, being ordered out of stores and restaurants and theaters might wear thin after a short time. You might resent whoever issued the order.

But play governor for a moment: What if you don’t issue the order? What if the worst numbers from Texas hospital experts become reality? Wouldn’t you wish you had ordered everyone inside? Maybe Abbott’s right, and the orders already in place are enough. Some mayors and county judges will be willing to enact stricter policies; in fact, Dallas County Judge Clay Jenkins issued a shelter-in-place order shortly after Abbott announced he wasn’t ready to issue one for the whole state. Maybe the large expected increase in cases will prompt Texans to stop running unnecessary errands.

At a moment when we don’t have enough testing kits to figure out who has the disease, enough hospital beds, masks and other medical equipment to treat those who have it while protecting medical personnel, or either a vaccine to block the virus or a cure to stop it, distance is our best defense — the moat around the castle.