San Antonians got a surprise from San Diego Comic Con this summer, when Amazon Studios revealed a teaser trailer for the show Undone that opened with an overhead shot of our downtown skyline. As it turns out, Undone co-creator and BoJack Horseman co-executive producer Kate Purdy is an Alamo City native, and she decided San Anto was the perfect setting for the genre-bending series.

Undone is centered on Alma Winograd-Diaz (Rosa Salazar), a young woman whose almost too-quotidian life is upended by a near-fatal car wreck. After the collision, she begins to see visions of her deceased father, Jacob (Bob Odenkirk).

The show’s production was tight knit despite being spread across the planet — the actors were filmed in L.A., then their performances were rotoscoped in Austin, Texas, at Minnow Mountain, all while series director Hisko Hulsing and his team at Submarine in Amsterdam did everything from creating original oil paintings of the backgrounds to crafting and compositing the two- and three-dimensional animation that formed the final product.

The result is a vividly animated world that smoothly integrates the actors’ performances with Alma’s unraveling universe, avoiding the pitfalls of CGI, where the seams between real-life and green screen can be pretty obvious to the viewer’s eye.

We caught up with Purdy over the phone to talk about Undone’s underpinnings, from location scouting and the show’s diverse cast of characters to her deeply personal connection to the story.

What led you to partner with BoJack Horseman colleague Raphael Bob-Waksberg to create Undone?

The impetus for this project came as a result of an episode I wrote in season one of BoJack Horseman, which is called “Downer Ending.” It’s an episode in which BoJack goes on this drug trip, and he experiences an alternate reality — a life that he could have lived if he had made less selfish choices. After writing that episode, Raphael approached me and said we should really think about doing a show together that explores these kinds of ideas and themes and emotionality. That’s where the project came from.

I noticed you also wrote BoJack Horseman’s “Time’s Arrow.” That’s quite the episode.

Oh, thanks! The episodes I wrote for season four — “Time’s Arrow” and “The Old Sugarman Place” — were inspired by the work that Raphael and I were already doing on Undone, which is exciting.

Unlike NBC’s The Night Shift, which tried to pass off Albuquerque as San Anto, Undone puts the Alamo City front and center, featuring both tourist attractions like the River Walk and highway interchanges that only locals would recognize. Knowing that the final product would be animated, what was the location scouting process like, and how much input did you give, both as a writer and a San Antonio native?

The location scouting process was really me going with a camera along with my partner Alex Maloutas, and we took photos and video of San Antonio and put together Pinterest pages and sent over all the photos and the video to Amsterdam for Hisko [Hulsing]. Then we reviewed those materials and I talked about each location, what the backgrounds would look like and how the city looks and feels, and he was inspired by that in terms of his work. He created this lush, beautiful interpretation, which I love.

For a story that’s about the fragmentation of reality, the production process had its own level of fragmentation geographically. Between filming in Los Angeles, converting the performances into rotoscope animation in Austin, and the background and final animation work done in Amsterdam, what challenges did this long-distance creative process pose, and how involved were you in the different stages?

Tommy Pallotta is one of our executive producers, and he works with Richard Linklater — he did A Scanner Darkly and Waking Life. So, right away, when we decided to do rotoscoping animation, Hisko suggested that we work with Tommy because he had worked successfully with Tommy on another rotoscoping project.

Tommy is a fantastic producer and was responsible for putting together the production pipeline, which of course is very complex. He created this internal system in which we would see on a pretty much daily basis all the rotoscoping in fragments — like seconds-long fragments — from Minnow Mountain, and then we would see the painted version of those fragments, and then the background paintings. At each step we would see each of the pieces and give approval, saying like, “this looks good, this looks great, this looks beautiful,” or “actually, her cochlear implant would look like this here,” or “technically San Antonio freeways have more greenery in this location.”

We were weighing in and having conversations at every step, so that required Skype calls and emailing and a lot of WhatsApping to different places around the world. But we were able to do it — I think, really, to the credit of Tommy, who kept the pipeline running and was always doing what he could to fix it when things didn’t work as smoothly as they could have. It’s definitely a difficult process and a learning process for all of us, but I think everyone involved are such fantastic collaborators and such incredible artists that we’ve all been very dedicated to making the best version of this that we could together.

You mentioned a cochlear implant. What character has that?

Alma has a cochlear implant, and we find that out in the first episode. She was born hearing, then lost her hearing, and then later in life — around age 8 — she got a cochlear implant. As part of her character, we really wanted to explore someone who is stretched in different ways through her identity. It’s someone who is in the hearing world, but also part of the deaf world. She’s Latinx — her mother is Mexican American — and her father is of Jewish descent. She’s in between these realms of reality, and is wondering about what is real and what’s not real, so we wanted to show what it’s like to be in between worlds in multiple ways.

Also, I studied ASL in high school and college and I fell in love with the deaf community in both those places where I studied — the language and the culture — and thought it was an interesting aspect of this character to showcase.

That’s one of the refreshing things about Undone — that it puts realistic Latinx characters and other people of color, like Alma’s boyfriend Sam, who’s played by Siddharth Dhananjay, front and center. How much of the composition of the cast was put in place during the writing process, and how much evolved as you moved into casting?

In terms of their cultural and ancestral backgrounds, we really knew that in the writing. We wanted to have as much inclusion as possible, but we also didn’t want that to be the defining aspect of who these characters are. We wanted it to be a piece of who they are, so it was an early decision to be as inclusive and natural as possible. 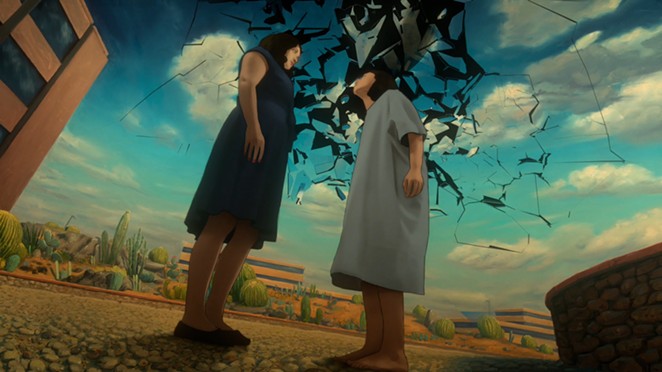 You’ve said in other interviews that this story is very personal to you, and is influenced by your experiences with mental illness in your family and then also personally. Could you expand on your connection to the story, and how it evolved into the magical realism that we see in the final product?

Growing up, I knew that my father’s mother Geraldine was schizophrenic. She died before I was born, but I didn’t know much about her. I knew that when my great aunt — her sister — looked at me, she saw her in me. She would say, “There she is. It’s amazing — look at her. There she is.”

So there was this projected image of this dead woman, who had had these experiences and this life that I knew nothing about, and I wondered about her, and I wondered about my own mental health and if I could lose my mind, and what that would look like. I developed fears around it. In college, I read an article that said usually by age 30 if a woman hasn’t developed schizophrenia she likely won’t, so I started counting down the days until my 30th birthday.

But then in my mid-30s I did have a breakdown. I experienced depression, anxiety, I felt out of control. I felt like I couldn’t get myself back — I didn’t know who I was. I started seeking out psychotherapy and Western medications, and I found some of that to be very helpful. I think it can be incredibly helpful for people. But, ultimately, what I found that helped me the most was alternative medicine and indigenous cultures, and indigenous ways of thinking about reality and mental health.

In many cultures, the idea about what reality is is more flexible than I traditionally had experienced growing up, and the people who have visions or hear voices are actually the shamans. They’re in touch with something beyond the veil of reality. They’re perhaps talking to ancestors, or being led or guided by forces that are trying to help them get on the right path or do the right thing with their life that they’re meant to do.

I think just being able to get into meditation or get into yoga or look at ways of being that were different than I had experienced before, I felt I was able to tap into these ways of thinking that helped reframe my experience for me and turn it into a blessing or a gift. That maybe this was my grandmother reaching through the veil and saying, you’re not meant to be living the life you’re living, and there are things you need to do to change the life you’re living to be on the right path. There are amends you have to make, there’s healing that needs to be done and there are people that you need to ask forgiveness from. That what’s happening to you is something that you can’t keep ignoring.