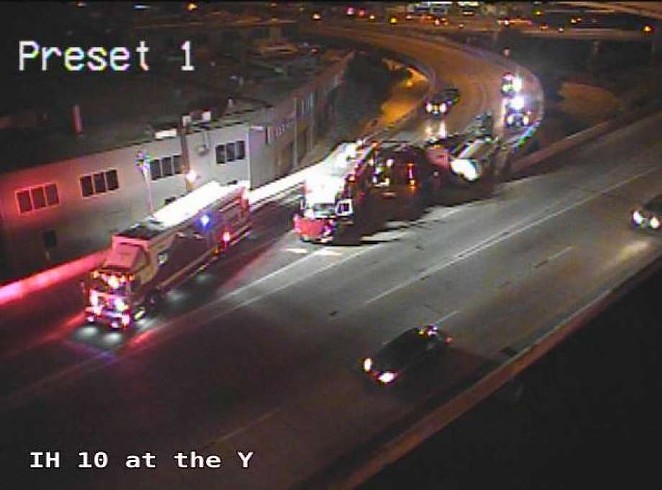 TxDOT
Emergency crews work to clear an overturned 18-wheeler at the Finesilver curve downtown.
Who didn't see this one coming?

An overturned 18-wheeler has shut down Finesilver curve — for what's estimated to be the 21st time in 10 years.

If you're a downtown commuter, there's a good chance you know the spot because you were cursing in gridlock the last time a truck bit it there. The interchange connects southbound Interstate 35 and westbound Interstate 10 that curves around the purplish Finesilver Building.

San Antonio police confirmed the accident at about 5:30 a.m. Wednesday to local media, although it's unclear how long cleanup will take. At 10 a.m., traffic around the area was still moving at a crawl.

A January report from News 4 estimated that 20 tractor-trailer trucks had capsized on the curve over a ten-year span. Previous accidents spilled watermelons, bottled water and produce across the ramp.

The most significant such accident was a 1999 hydrochloric acid spill that shut down the highway for much of the workday and forced evacuations of nearby homes and businesses.

Hazardous cargo has been off limits on the route since then. The Texas Department of Transportation also installed digital signs to warn drivers about their speeds.