Send a News Tip
At around midnight Tuesday, the Texas House State Affairs Committee passed an abortion-restrictive bill in an 8-3 vote during a second special legislative session. Among other effects, the bill would automatically close nearly all abortion centers in the state, severely limiting access to the majority of women and outlawing the procedure after 20 weeks. The hearing, limited by Republican Chair Byron Cook (R-Corsicana) to eight hours, drew more than 3,000 testifiers and nine overflow rooms of hopeful speakers and onlookers. Of the thousands that came out, about 1,000 signed up to testify and less than 100 were able to voice their opinion on the controversial legislation. 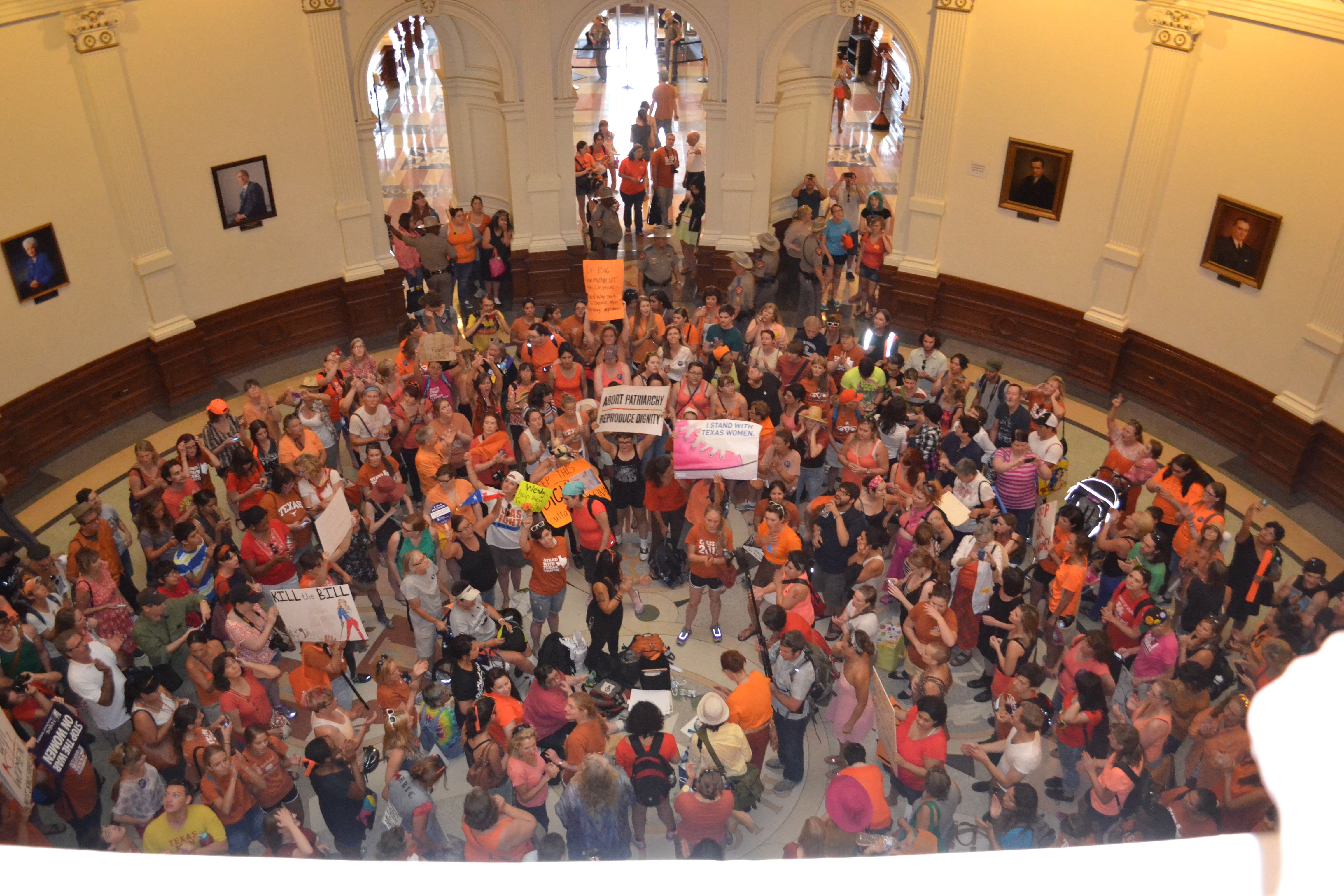 The number of participants appeared unprecedented, Rep. Helen Giddings (D-DeSoto) commented, “our system has never seen an overload like this.” While Rep. Jessica Farrar (D-Houston) asked Cook to prolong the hearing in light of the hundreds waiting to testify, Cook denied the request and even talked over his fellow lawmaker – a bold move considering the vocal outcry from pro-choice legislators and activists to let their side be heard. Cook came under fire last month for similarly curbing testimony and deeming the emotional, personal stories of speakers “repetitive.”

Bill author Rep. Jodie Laubenberg (R-Parker) largely dodged or did not have concrete (or correct) answers to a series of questions from Farrar, who asked about the cost of upgrading abortion clinics to ambulatory surgical centers (a requirement in the bill that reproductive health professionals say will shut down 37 of the state’s 42 clinics), the cost of an abortion, and questions of provider capacity. Like a broken record, Laubenberg continued to answer scientific and fact-based inquiries with a simple, “the bill is about the health and safety of women.” Farrar closed her questioning, noticeably frustrated, “I’ve heard the same answer to every question, so I’ll save you and me the time.”

The hearing was marked by passionate and oftentimes intimate and revealing testimony from both anti-choice and pro-choice speakers. Expert witnesses included Stacy Wilson from the Texas Hospital Association, who oppose the requirement in House Bill 2 that would force abortion-administering doctors to secure admitting privileges at a hospital no further than 30 miles where the procedure is performed. Wilson highlighted the complications of the demand, like the slim likelihood a doctor who only performs abortions at an outside clinic would be able to gain admitting privileges at a hospital. Countering her claims, an anti-choice OB-GYN doctor said, anecdotally, he signed off on several admitting privileges at his hospital and that if a clinic closes down it’s a result of their choice not to follow regulation.

An OB-GYN physician with the Congress for Obstetricians and Gynecologists-Texas also took the podium to speak against HB2, saying the legislation was “extremely intrusive,” not based on sounds science, a threat to quality healthcare and driven by ideology. His organization opposes the bill’s content, issuing a statement against its predecessor, SB5. The national ACOG released a notice Tuesday that comes down hard on both HB2 and its Senate counterpart, SB 1. Both bills are, “plainly intended to restrict the reproductive rights of women in Texas through a series of requirements that improperly regulate medical practice and interfere with the patient-physician relationship,” they write. And if enacted, the legislation would set a “dangerous precedent.”

In a rare instance, the committee heard from the Department of State Health Services, the state agency that oversees both abortion clinics and ambulatory surgical centers (ASCs). Ellen Cooper, DSHS health facilities licensing manager, informed the representatives abortion clinics are inspected more frequently (once a year) than ASCs (once every three years)­. So, while GOP lawmakers claim their goal is to aid the health and safety of women when it comes to abortion procedures by imposing stringent regulations, HB2 would actually decrease the amount of supervision on abortion clinics.

Cooper also said she was “not aware” of any major concerns or problems surrounding abortion clinics that would necessitate the costly upgrades associated with transitioning to an ASC.

The bill’s passage comes on the heels of a recently released poll by Greenberg Quinlan Rosner Research that finds the majority of Texans are against the abortion-restrictive legislation. Some 80 percent of registered voters who responded said they do not want abortion to be on the special session agenda, 63 percent said the state already has enough abortion restrictions in place today, and nearly three-fourths of those surveyed say the choice to have an abortion, "should be made by a woman, her family, and her doctor, not by politicians.”

The bill now moves to the House floor. The full House and Senate are expected to reconvene next week.