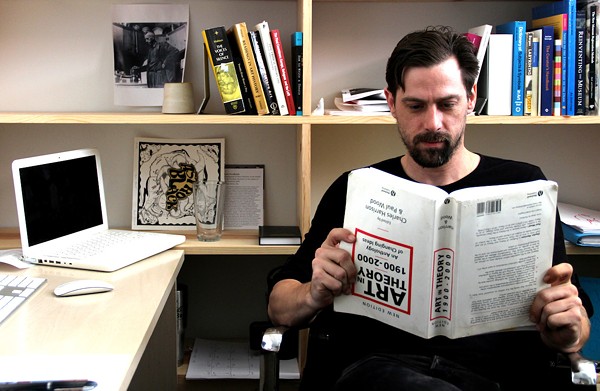 Courtesy
It’s amazing how many of San Antonio’s most talented artists began their careers in the Texas panhandle: Ken Little, Hills Snyder, Diana Kersey, Jeremiah Teutsch, Cakky Brawley, Sarah Roberts and Greg Johnson are just some of the transplants who add to our thriving local art scene. Chad Dawkins made his way here from Lubbock, and, in just a short time, received his BA in art history and criticism, worked as the studio tech at Artpace and began writing reviews and essays while curating exhibitions at contemporary art spaces such as Sala Diaz. He has now settled into the job of curator and director of exhibitions at the Southwest School of Art. Oh, and he’s working on his PhD on the Philosophy of Art. Dawkins and his wife, Amy Austin, the director of development at Artpace, now make up one of San Antonio’s true art power couples.

What was your first introduction to the world of art?
I think my first encounter with contemporary art came in the form of being handed a book of Andy Warhol’s Flowers in the eighth grade. I wasn’t reading in class during class-reading time and my teacher was generous enough to compromise with me to at least have a book open. My first experience with the art world came about when I was around 17. Jeremiah Teutsch and I had a show in the backroom of a pool-hall bar in Lubbock.

How would you explain the role of the curator to someone outside the art world?
Simply put, a curator is someone who organizes art exhibitions. The role includes a myriad of duties, but primarily they are the ones who talk to artists, select artwork, make decisions and arrange that work for a given space or situation. But since you asked, the term curator comes from the Latin curare — “to take care of.” Curators in the Roman Empire were “caretakers” of administrative departments. In the 14th century, guardians or “overseers of minors and lunatics” were called curators. Since the 17th century, a curator has been someone in charge of a museum, zoo, library or other exhibits. In many museum contexts, curators are those that oversee the care and preservation of specific parts of a collection. It is only since the end of the 20th century that we understand a curator as someone who acts independently to organize exhibitions. The title is so overused now that it’s almost meaningless in some contexts. But, ironically, curators do still take care of things — even if it’s shoes or an Instagram post.

Did you gradually morph into curating, or was it something you pursued?
Gradual morph. I never wanted to pursue curation as a practice and I continue to be reluctant about accepting it as my practice. I seriously pursued art-making for about 15 years. During my years in undergrad, I was encouraged by some smarter, wiser folks around me that I should pursue art criticism and writing. I did, and it turned out to be transformative for me for several reasons. I guess because of my critical stance, a couple of people asked me to curate shows. Of course I accepted, but was honestly very reluctant about it. Art writing pays nothing; I was a picture framer and art handler for over a decade, so my trajectory led me to pursue administration, which for my role at the Southwest School of Art includes curation. I use the term curator as shorthand to give others a sense of what I do in the arts. 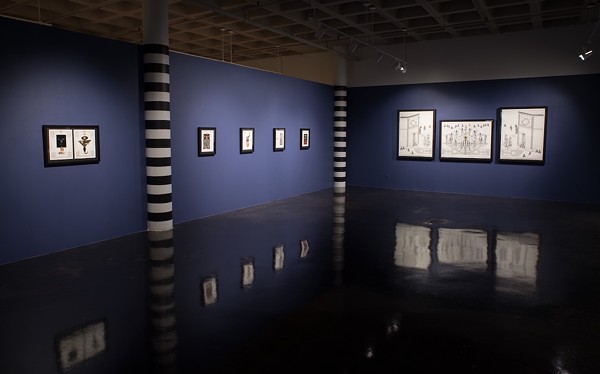 Courtesy
A recent James Smolleck exhibition Dawkins curated at the Southwest School of Art
If you could briefly go back and place yourself in any time and place in art history, where and when would it be?
If I could time travel, I wouldn’t make just one stop. But I guess if I only got one chance, I would go to Vienna, March 31, 1913, to attend Arnold Schoenberg’s concert of new music that so offended the audience it ended in riot.

You’re currently working on your doctorate, and I’m very excited about the future prospect of calling you “Doc Dawkins.” Can you talk about the subject of your study?
Please don’t. But if you get any sick ideas you can call my office … Yes, I am currently writing my dissertation for a PhD in the philosophy of art and theory. My research focuses on the role of exhibitions as ideological apparatuses and the way that they influence not only the way that we view and perceive artwork, but that their influence extends to the ways art objects are made. A lot of art history and theory is concerned with what art is, but I am more concerned with how it is what is. I am looking at the ideological structures that make something “Art” — that gives objects and situations significance — and I think that exhibitions are at the core of how this all works.

If you could own any work of art, what would it be?
That is a hard one. I’ll pick Caravaggio’s “Conversion of Paul on the Road to Damascus.”

What are the qualities that make a successful art curator?
I don’t know. I’m sure, like anything else, there is the factor of being in the right place at right time. The qualities I find in professionals that I admire are persistence, focus and staunch devotion to what one cares about. Mental agility and problem-solving skills, especially with resources, are essential. The ability to articulate why you like or dislike, or find successful or not, whatever it is you are looking at. It probably helps if you like the art and artists you are dealing with, too.

What advice would you give to art students today?
1. You must maintain a healthy distrust of your own decisions and practices. 2. Continuously maintain a website and your CV. 3. Take your potential career seriously and act like a professional, but don’t take yourself too seriously. We’re not saving lives with art, we’re not field medics, but the art world isn’t a joke either. 4. Everything is sculpture. Lastly, I always tell students that the most freeing experience I’ve had was the first time someone asked me if I was an artist and I answered no. There are a lot of roles to play in the art world(s) – everyone doesn’t need to be an artist. 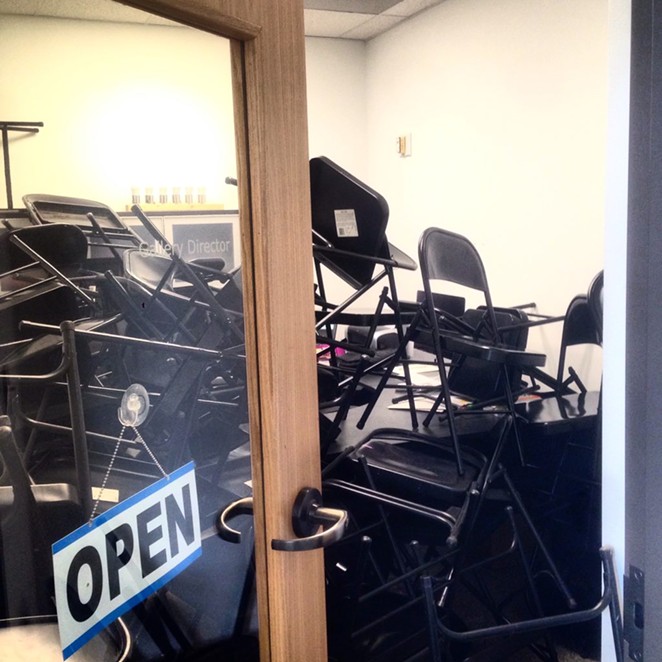 Courtesy
A student project in Dawkins’ office at Texas State
What kind of changes do you notice taking place in the world of art institutions?
I’ll only speak for what I know best, which is within the U.S. One good change is the increased diversification of artists represented in exhibitions and at galleries. To be clear, diversity means variety, and that variety leads to an increased awareness of the world we all inhabit. The flipside of this is hyper-awareness and attempts to be inclusive regardless of the works or ideas being presented. But there is still a lot of work to do to reach gender or cultural parity in this country. A change for the worse is the financial situation. Income inequality is affecting institutions as much as individuals. Historically, everything exciting happens in scrappy alternative spaces and ambitious nonprofits. There are serious financial needs in these spaces, and they are increasingly reliant on the generosity of individual donors and while facing a cultural expectation of boot-strap self-reliance. Corporations and governments need to step up and seriously invest in these organizations.

Simon Doonan has said that the art world has become “a vapid hell-hole of investment-crazed pretentiousness.” Are you optimistic about the future of art?
Yes and no, but there is nothing pretentious about it. I assume he is referring to the “blue chip” art-stars that make up the auction market fodder and museum blockbuster headliners. No, it’s not pretentious because it’s ubiquitous. Warhol, Picasso and Jeff Koons are like Starbucks. They are everywhere, there is nothing special about it and it’s always the same. Sure, the price points of those types of works are only for the one percent, and those who buy art to invest are not taking risks on off-brand products. But more importantly, this influences institutions’ decisions. Many major institutions are not taking chances and playing it safe with regard to types of work for the sake of brand recognition. Throughout the 20th century, institutions kept pace with changing tastes and attitudes about art’s potentials, but now it seems that museums in every major city in every country have a rote checklist of modern and contemporary artists included in their rotation, and it’s really boring. We need more pretentiousness, more pride in place, and more opportunity for the artists in those places. This also points to the problem of institutions playing it safe by appealing to the lowest common denominator perceived in their audience. We have returned to a 19th-century idea of art museums as educational institutions for the masses. We have to stop “engaging audiences” with remedial information and juvenile props.

Name something that would surprise your friends to know about you.
I’ve always loved space and astronomy and wish I could have worked for NASA.