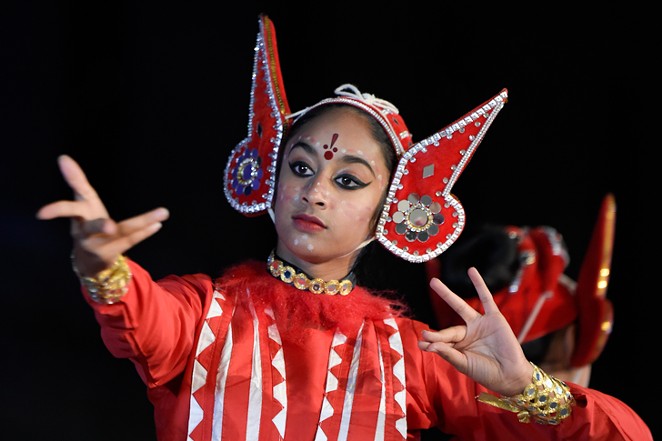 Evidenced by our famed, 10-day-long, confetti-filled Fiesta, San Antonians love to celebrate. But we also do a pretty admirable job of supporting the arts and cultures that make the Alamo City a vibrant place to live and visit. Without ignoring the crowd-pleasing favorites, our roundup of artsy fests also includes annual traditions for culture seekers of the niche variety.

Fiesta
Too often summed up as San Antonio’s version of Mardi Gras, Fiesta became a San Antonio tradition with the inaugural Battle of Flowers Parade in 1891. In the inaugural version, participants “pelted each other with blossoms” in tribute to the heroes of the Alamo and the Battle of San Jacinto. The event has expanded exponentially since then to become a 10-day celebration packed with multiple parades, a lavish Coronation of the Queen of the Order of the Alamo (and its spoof-tactic stepsister Cornyation), collectible Fiesta medals, confetti-filled cascarones, free-flowing beer and margaritas, and signature treats like chicken on a stick. When you’re nursing that unavoidable Fiesta hangover, remember it’s all for a good cause — the citywide affair raises big bucks for a diverse assortment of local charities and scholarships. April 16-26, multiple locations, (210) 227-5191, fiestasanantonio.org.

Luminaria
Launched in 2008 by former San Antonio Mayor Phil Hardberger as a local take on the illuminated nighttime arts festivals of Europe, Luminaria has venue-hopped over the years but seems to have found a fitting home at Hemisfair. The event springs to life in living color each November with light projections, art installations, film screenings, roving performers and indoor and outdoor stages hosting everything from live music and avant-garde theater to dance and spoken-word presentations. November, Hemisfair, 434. S. Alamo St., (210) 721-1670, luminariasa.org.

Contemporary Art Month
Founded in tandem with the pioneering local art space now known as Blue Star Contemporary, Contemporary Art Month or CAM functions as both a nonprofit and an organizing umbrella over a broad range of events occurring in March. Although it changes significantly each year based on communitywide contributions, art fans can always count on annual signatures including the CAM Kickoff Party, a Closing Party complete with the presentation of “CAMMIE Awards” and the CAM Perennial exhibition, which features local artists selected by a guest curator from outside San Antonio. March, multiple locations, contemporaryartmonth.org.

Diwali
Presented by Anuja SA — a nonprofit dedicated to strengthening the Sister City alliance between San Antonio and Chennai, India — Diwali uplifts the arts and culture of India. Expect a lively celebration featuring costumed dance performances, vendors offering cuisine and handicrafts and a symbolic lighting of candles set afloat on the San Antonio River. Designed to represent “the triumph of good over evil, light over darkness, knowledge over ignorance,” the beloved event culminates with a fireworks extravaganza that can be heard across downtown. November 7, Hemisfair, 434. S. Alamo St., anujasa.com.

San Antonio Film Festival
Established in 1994, the San Antonio Film Festival (SAFILM) bills itself as “an accessible and inclusive platform for cinema artists.” Under the direction of film buff and educator Adam Rocha, SAFILM accepts submissions from “artists at every level” and doles out more than a dozen prizes in categories ranging from Best San Antonio Filmmaker to Best High School Filmmaker. In addition to assembling a diverse program of independent features, documentaries and shorts, SAFILM emphasizes education via free workshops and pays tribute to visiting stars. Cheech Marin, Cybill Shepherd and Jackie Earl Haley were all honored at the 25th annual festival in 2019. August 4-9, Tobin Center for the Performing Arts, 100 Auditorium Circle, (210) 885-5888, safilm.com.

Tejano Conjunto Festival
A local treasure for 39 years and counting, the Guadalupe Cultural Arts Center’s Tejano Conjunto Festival preserves and celebrates musical genres that are embedded in the cultural fabric of San Antonio. After kicking off with community events at the historic Guadalupe Theater — including a senior’s dance and inductions into the Conjunto Hall of Fame — the fest takes over Rosedale Park with a weekend filled with food, cold beer and dancing to acts from Texas, California and sometimes even international locales. May 13-14, Guadalupe Theater, 1301 Guadalupe St.; May 15-17, Rosedale Park, 303 Dartmouth St., (210) 271-3151, guadalupeculturalarts.org.

Fotoseptiembre
Spearheaded by multidisciplinary artist, writer and composer Michael Mehl, Fotoseptiembre serves up a veritable feast of photography in all flavors, from traditional reportage to alternative fashion. A fall favorite since 1995, the festival showcases work by local, national and international photographers via exhibitions in galleries, cafes and non-traditional venues throughout San Antonio and even into the Hill Country. September, multiple locations, fotoseptiembreusa.com.