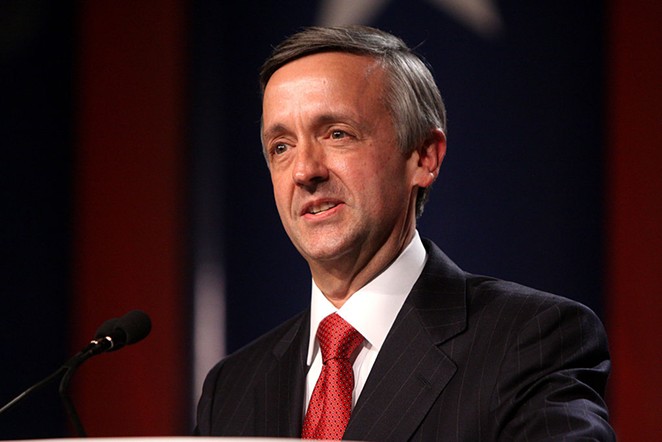 Wikimedia Commons / Gage Skidmore
When Vice President Mike Pence landed in Texas last weekend to reassure us that state Republican leadership and the Tweeter-in-Chief have this coronavirus thing under control, it was little surprise he did so at Pastor Robert Jeffress’ First Baptist Church in Dallas.

Jeffress, one of the president’s most unflinching evangelical supporters regularly uses his sermons to urge followers to guzzle the Trump-flavored Kool-Aid in large doses. What other choice do they have? After all, Jeffress has warned that the Democrats are “a godless party” and that if they control White House, “this country is finished.”

Beyond the obvious hypocrisy of being a man of God who heaps praise on a racist serial philanderer whose policies break up refugee families, this weekend’s event suggests Jeffress is also willing to put political optics ahead of concern for his own congregants’ health.

Attendees of Pence’s Sunday visit — billed as the “Celebrate Freedom Rally” — were “strongly encouraged” to wear masks and maintain physical distance. But video showed attendees packed together, many not wearing face coverings. Dallas TV station WFAA reported that the megachurch planned to operate at 70% capacity, meaning about 2,200 people flooded into the sanctuary.

Most disturbing, though, is the footage showing a choir of more than 100 people belting out praise hits during the event — again, sans masks. The CDC has warned that group singing performances such as choir recitals can become “super-spreader events” for COVID-19.

Jeffress called his Pence praise session a “patriotic service” to celebrate “God’s unique blessings on our country.” We call it being a reckless assclown.