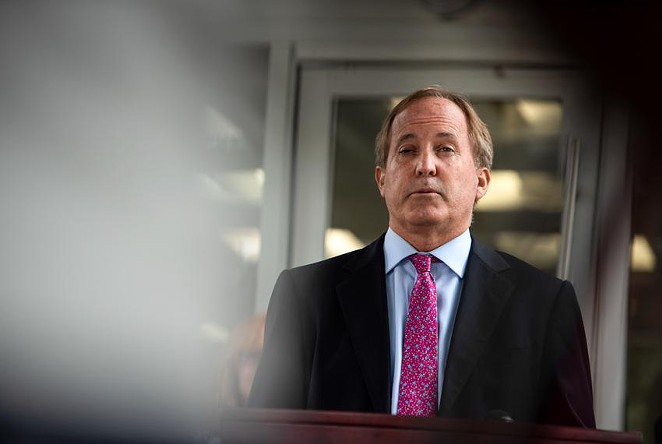 Mark Felix / Texas Tribune
The Travis County District Attorney's office said last week that Attorney General Ken Paxton had violated open records law by withholding communications related to his trip to Washington, D.C., during the attacks on the U.S. Capitol on Jan. 6, 2021.
Attorney General Ken Paxton said the Travis County district attorney's determination that Paxton violated open records laws by withholding information related to his trip to Washington, D.C., on the day of the Capitol insurrection was "meritless" and that his office had fulfilled its obligation under the law.

Last week, the district attorney's office gave Paxton four business days to turn over communications requested by the state's leading newspapers relating to his trip or face a lawsuit.

On Friday, Austin Kinghorn, a lawyer for the attorney general's office, dismissed the district attorney's findings, saying that office had provided no provisions under the state's open records law that had been violated and implied that the newspapers had made the requests to publish stories about them.

"In each instance, complainants' allegations rely on unsupported assumptions and fundamental misunderstandings of the PIA [Public Information Act] and its requirements," Kinghorn wrote. "Frustrated that they have failed to uncover anything worth reporting following 'numerous open records requests to AG Paxton office for various documents,' complainant newspaper editors have sought to leverage your office's authority to further their fishing expedition, or worse, manufacture a conflict between our respective offices that will give rise to publishable content for the complainants' media outlets."

The Travis County district attorney's office action stems from a complaint by editors from five of the state's top newspapers — the Austin American-Statesman, The Dallas Morning News, the Fort Worth Star-Telegram, the Houston Chronicleand the San Antonio Express-News — alleging that the state's top law enforcement official had violated Texas' open records law by withholding communications related to Paxton's trip to Washington, D.C., last year that they argue are subject to disclosure.

In a joint statement, the editors of the newspapers wrote, "We’re disappointed in the attorney general’s response. We believe these records are public and should be released. We hope the Travis County district attorney continues to hold the attorney general accountable for following our state’s open records laws and continues to advocate for the public’s right to know in this case."

The newspapers want records related to Paxton's communications in the days surrounding the attack on the U.S. Capitol on Jan. 6, 2021. On that day, Paxton spoke at a pro-Trump rally that preceded the storming of the Capitol. His wife, state Sen. Angela Paxton, R-McKinney, also attended the rally.

In the letter, the attorney general's office said the newspaper editors base their complaint on an "awareness of a small number of inconsequential documents they believe should have been produced" in public records requests and "baselessly speculate" that Paxton is failing to comply with the open records law.

Kinghorn said the "inconsequential documents" include a text message sent to Paxton's personal cellphone by a Dallas Morning News reporter and two "spam" emails and an internal email that announced the temporary closure of an office parking garage.

The Texas Public Information Act grants the public the right to government records, even those kept on personal devices or on a public official's online accounts.

Paxton's office has dismissed the district attorney's actions as a "fake controversy drummed up by hard-left local officials because they want to reignite hysteria about the attorney general’s political speech on January 6 ... which was not an official state activity."

José Garza, the Travis County district attorney, is a Democrat. Paxton is a Republican and an acolyte of former President Donald Trump. He has been endorsed by Trump in his reelection bid, in which he faces three Republican challengers and several Democratic challengers.

In their complaint, the newspapers said Paxton was using attorney-client privilege to withhold every single email and text message around the time of the Jan. 6 rally.

The newspapers also complained that the attorney general's office had no policy for handling work-related records kept on personal devices or accounts, like the text message sent by the Dallas Morning News reporter to Paxton's personal phone.

The journalists further complained that Paxton had responded to a request for his text messages about a trip to Utah during last year's February freeze by providing the communications of Utah Attorney General Sean Reyes, but not his own. When a reporter for The Dallas Morning News asked why the office had not provided Paxton's text messages, a lawyer for the attorney general's office responded, "General Paxton provided the messages."

Paxton is in the midst of his most difficult reelection cycle yet.

The three have blasted the incumbent for multiple legal issues he is facing, including a 6-year-old securities fraud case that has dogged him since his first year in office. He overcame that to win reelection in 2018. But in October 2020, eight of his former top deputies accused him of bribery and misuse of office. Weeks later, all eight deputies had either been fired or resigned from the attorney general's office.

Four of those whistleblowers are now suing Paxton under the state's whistleblower law. They are seeking compensation for lost wages and other damages, and some are seeking reinstatement to their former positions.

Paxton is also reportedly under FBI investigation for the allegations registered by the whistleblowers.

He has denied wrongdoing in all of these cases.